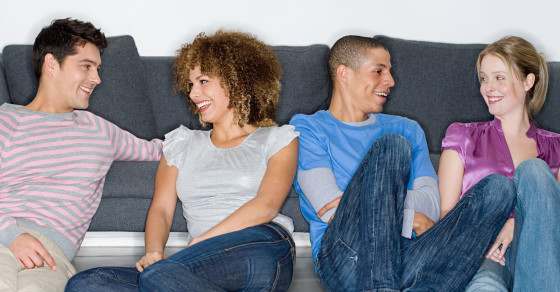 Humans Use More Positive Words Than Negative Ones
By Abigail Tracy

Humans Use More Positive Words Than Negative Ones

There are more happy words than sad words, scientists have cheerfully reported. While you might feel inundated with dirty song lyrics, vulgar cable TV shows and videos of children dropping F-bombs in this day and age, the human language actually skews toward positive words, according to a new study.

A team of researchers from the University of Vermont gathered billions of words across 10 different languages from 24 types of sources—from books to music lyrics to Twitter—and found that people tend to use positive words more than negative ones.

The team sought to test the “Pollyanna Hypothesis”—a 1969 idea from two psychologists of the University of Illinois. Named after the optimistic children’s literature character, the premise is that it is human nature to be positive, and more broadly that “humans tend to look on (and talk about) the bright side of life.”

The English language ranges most widely across the happiness spectrum on all sources, from very happy to very sad, whereas other languages have a much narrower range of expression, says the study:

In terms of emotional variance, all four English corpora are among the highest, while Chinese and Russian Google Books seem especially constrained.

It seems the Pollyanna Hypothesis proved true. After identifying 10,000 of the most commonly used words among the 10 languages, the team paid native speakers to rank the words on a nine-point scale ranging from a deep frowning face to a gleefully smiling one. They then extrapolated scores for various words, for instance “greed” scored a 3.06, while “food” grabbed a 7.44.

The study outlines that this bias in language could point to an even greater social evolution—our tendency toward happiness could lead to happier people in general:

A general positive bias points towards a positive social evolution and may be linked to the gradual if haphazard trajectory of modern civilization toward greater human rights and decreases in violence.