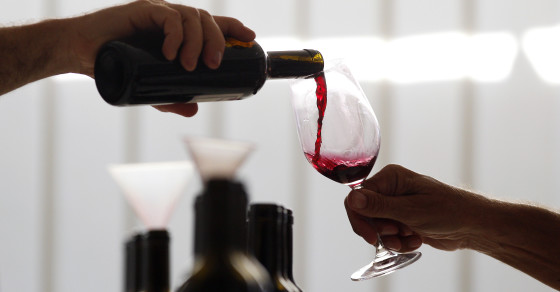 Wine DNA Research Sheds Light On Why We Have Different Pinots
By Joshua A. Krisch

Wine DNA Research Sheds Light On Why We Have Different Pinots

When it comes to a cool glass of Pinot, the difference between a bold noir and a sweet grigio is all about the DNA. In a new study published in PLoS Genetics, scientists describe how different colored berries within the Pinot family (from noir’s deep red to blanc’s light yellow) arise when mutations block red pigment production. Over time these minor mutations have given rise to black, gray and yellow grapes—and several delicious Pinot varieties.

Pinot isn’t a new type of grape; the ancient Roman, Columella, actually referred to Pinot Noir in his treatise on agriculture. And it’s these strong genetic lines, which can be traced back roughly 2,000 years, that make Pinot the perfect grape for genetic analysis. (When scientists released the complete grapevine genome back in 2010, the Pinot genome was published shortly thereafter.) But until now, scientists were unsure of the molecular mechanism that gave rise to such different colors and flavors within the Pinot family.

More Get Ready For “Nosewitness” Testimony

After examining 33 variants of Pinot noir, Pinot gris and Pinot blanc, the researchers found that Pinot noir chromosomes often swap genes, occasionally losing genetic information along the way. These “deletions” shut down the genes that normally kick off a cascade of proteins, known as the anthocyanin pathway, which is supposed to produce red pigment. When deletions block this pathway, Pinot noir berries lose their rich, red hue, and fade into a lighter blanc. When this happens consistently, you end up with a vineyard of blanc or gris.

“They switch from Pinot noir to Pinot blanc at the cellular level,” says Frédérique Pelsy, president of the National Institute in Colmar, France, and lead author on the study.

Although vintners are unlikely to change their cultivation practices based on this research, Pelsy says, it is fascinating to finally understand the science behind farming techniques that stretch back thousands of years.