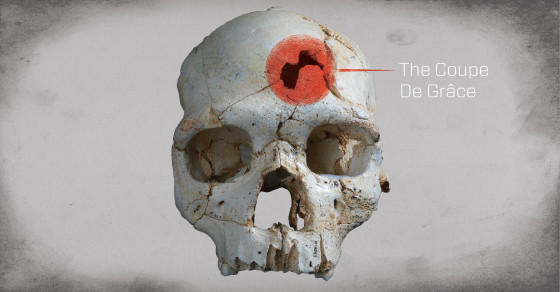 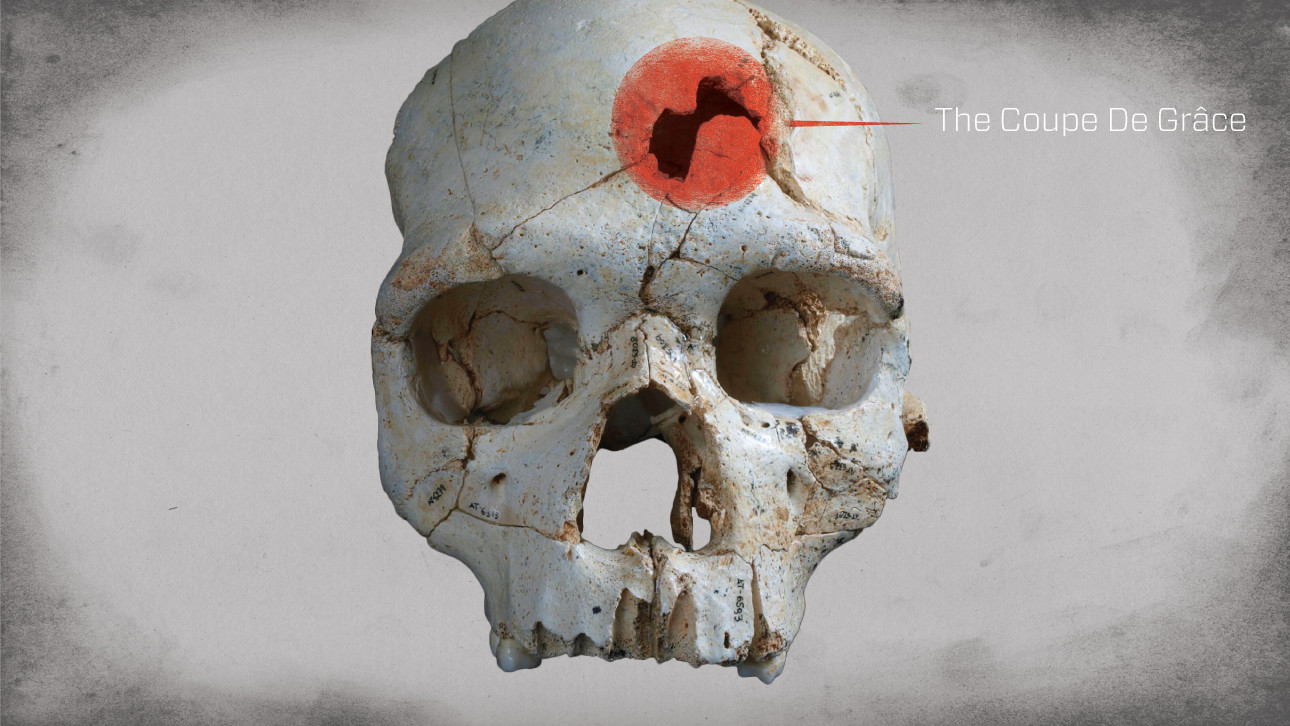 Two blunt traumas above the eye suggest this skull was smashed by man — (Photo: Javier Trueba / Madrid Scientific Films, Photo Illustration: Robert A. Di Ieso/Vocativ)
By Joshua A. Krisch
May 27, 2015 at 2:03 PM ET

In Northern Spain, the crumbling skeletons of 28 early humans who died approximately 430,000 years ago sit in an underground cave system. Their cause of death—and how they ended up in a pile at the bottom of a 50-foot vertical shaft—remains a mystery. But according to a new study published in PLoS, involving some true detective work, gashes on one of the skulls suggest that at least one poor hominin was likely murdered with a blunt weapon. The findings suggest that interpersonal violence and its tragic outcomes may be almost half a million years old.

Early humans seem to have hit each other on the head quite often (finally lending some scientific credence to our Flintsones-fueled obsession with cavemen and clubs). Signs of head trauma on ancient human fossils are actually “relatively common,” says Nohemi Sala, co-author on the study and professor at Complutense University in Spain. “Most cases show signs of healing, indicating survival of the individual,” she adds. But one skull at the bottom of that shaft, dubbed Cranium 17, was different. “It would seem to represent a case of lethal interpersonal violence,” Sala says. Murder.

The unfortunate owner of Cranium 17 seems to have been bludgeoned above the left eye twice. By applying modern forensic techniques to the ancient skull, Sala and her team determined that both fractures occurred while the early human was still alive, and appear to have been caused by two separate swings of the same blunt weapon. Trajectory and contour analysis confirmed that the blows were unlikely to have been an accident, from a fall or a mammoth hunt gone terribly wrong. Cranium 17, the authors conclude, likely represents the earliest case of murder in human history.

So it was the butler (early hominin), with a candlestick (analogous, blunt object) in the library (50-foot deep shaft). But how did the bodies end up in a pile underground? Here the authors suggest a controversial, but fascinating, explanation—the early humans put them there, in what would be easily the earliest case of ritual burial ever documented. If confirmed, there may be a silver lining at the bottom of that dark, ancient shaft. Humans may have been killing each other since time immemorial, but perhaps they’ve also been caring for the dead, in a display of sentimentality that prior studies suggest began no earlier than 100,000 years ago.

“We have documented that the intentional interpersonal violence is a behavior that accompanies humans since at least 430,000 years ago, but so does the care of sick or even the care of the dead,” Sala says. “After all, we have not changed much in the last half million years.” Clubs don’t kill people. People kill people.