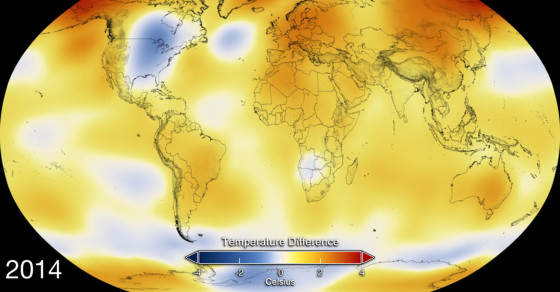 Watch This Time-Lapse NASA Video Of Us Turning Earth Into An Oven
By Joshua A. Krisch

*This story has been updated to reflect a clarification from the Associated Press. Please see our note, below.

This past year was chillier than usual in the eastern United States. But everywhere else on Earth, it was hot. Hotter, in fact, than it has been in the 134 years since scientists started keeping track of average global temperatures.

Earlier this morning, NASA confirmed that 2014 broke all global warming records since 1880. The National Climatic Data Center compiled the data and posted a full report online. The embedded video below is what some of that data looks like—an incredible (and colorful) time-lapse of the planet transitioning from cold to hot.

This news certainly will not silence climate deniers (if John Oliver couldn’t do it, nobody can). John R. Christy, a well-known climate skeptic, told The New York Times this morning that 2014 broke warming records by only “a few hundredths of a degree, well within the error margin of global temperature measurements.” Christy failed to mention that, according to a data analysis conducted by John Grego at the University of South Carolina, the 10 hottest years since 1880 have all occurred in the past 20 years.

The odds of that happening at random are 650 million to 1.

It is important to note that 2014 was not supposed to be this hot. The warmest years typically coincide with El Niño, an oscillating weather pattern that occasionally dumps heat into the atmosphere. The time-lapse visualization from NASA (above) shows just how much the planet has warmed since 1880.

NOTE: The Associated Press recently clarified that “650 million to 1” is a somewhat suspect figure, statistically speaking. This article from the WSJ elaborates further. AP’s official statement:

WASHINGTON (AP) — In a story Jan. 16, The Associated Press reported that the odds that nine of the 10 hottest years have occurred since 2000 are about 650 million to one. These calculations, as the story noted, treated as equal the possibility of any given year in the records being one of the hottest. The story should have included the fact that substantial warming in the years just prior to this century could make it more likely that the years since were warmer, because high temperatures tend to persist.

The story also reported that 2014 was the hottest year on record, according to the National Oceanic and Atmospheric Administration and NASA, but did not include the caveat that other recent years had average temperatures that were almost as high — and they all fall within a margin of error that lessens the certainty that any one of the years was the hottest.

An earlier version of the story quoted Rutgers University climate scientist Jennifer Francis as noting that the margin of error makes it uncertain whether 2014 was warmest, or the second, third or sixth warmest year. She said that regardless, the trend shows a “clear, consistent and incontrovertible” warming of Earth. That reference to the margin of error was dropped in later versions.