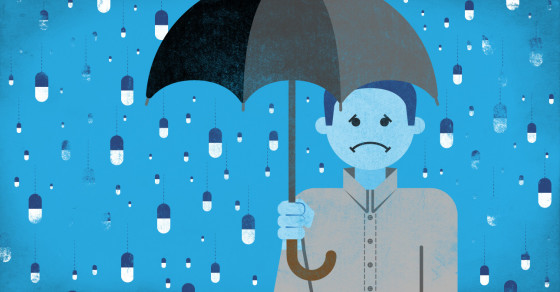 Prozac. Zoloft. Paxil. Selective serotonin reuptake inhibitors, or SSRIs, are some of the most pervasive drugs in modern medicine, with roughly 10 percent of Americans taking them for depression. (Among middle-aged women, that figure is closer to 25 percent.) But according to a new editorial in The British Medical Journal, there is scant scientific evidence that SSRIs—or for that matter, serotonin—play a major role in depression.

“In the 1990s, no academic could sell a message about lowered serotonin. There was no correlation between serotonin reuptake inhibiting potency and antidepressant efficacy. No one knew if SSRIs raised or lowered serotonin levels; they still don’t know,” writes David Healy, a psychiatrist and professor at the University of Bangor in the U.K. and author of the editorial. “There was no evidence that treatment corrected anything.”

More How The Sugar Industry Gamed The Government

Healy goes on to describe a veritable scramble within the ranks of major drug companies to find some use—any use—for serotonin medications. SSRIs easily beat out the competition, tricyclic antidepressants, and gave rise to prominent brand names like Prozac, which have become cultural icons. Meanwhile, Healy writes, the evidence lagged behind the marketing strategy.

This isn’t Healy’s first time writing in opposition to SSRIs. Back in 2005, he published a controversial study that suggested SSRIs doubled a depressed person’s lifetime risk of suicide. Although more recent studies have called some of Healy’s conclusions into question, exactly how much evidence we have that SSRIs help with depression remains unanswered. In any case, many scientists are now pushing for a combined therapeutic approach to depression—one that involves personalized psychotherapy, along with traditional medications.

But experts are quick to point out that we need more research, both in psychotherapy and SSRIs.

“Some patients respond better to psychotherapy than medication—and vice versa—or prefer one type of treatment over another,” writes Richard A. Friedman, a professor of clinical psychiatry at Cornell University, in a recent article in The New York Times. “We need to learn much more about how various types of psychotherapy compare with medications clinically as well as at the level of the brain.”

Is the Link Between Depression and Serotonin a Myth? (TIME)