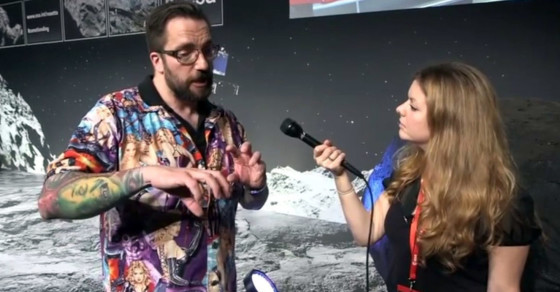 It was the shirt seen round the world.

When British physicist Matt Taylor and his co-workers succeeded in landing a tiny probe on a comet as part of the European Space Agency’s Rosetta project early last month, TV cameras were there to capture the celebration. But when a news crew interviewed Taylor, some viewers were more astonished by his choice of clothing than the impressive scientific feat: a loud bowling shirt, covered in scantily clad pinup girls hoisting guns.

A shitstorm, or rather “shirtstorm,” ensued, with women calling the button-up pornographic and demeaning, eventually forcing Taylor to publicly apologize. The shirt, they claimed, served as a blatant reminder of how unwelcoming the STEM (science, technology, engineering, mathematics)  fields are to women, echoing a study released this summer that found two-thirds of women in those fields reported being sexually harassed.

But now there’s a new shirt in town. By channeling her anger into something constructive, Elly Zupko, a writer and artist from Baltimore, decided to give Taylor a new look by photoshopping pictures of notable women from STEM fields all over his chest and then tweeting it out the world. Her image was retweeted thousands of times and eventually became known as #TheOtherShirt.

“I wanted to make the point that you can celebrate women you admire through your apparel,” Zupko says of her image. “But in the context of a great scientific achievement, how about celebrating women who have made great achievements of their own?”

With a recently launched Kickstarter, she’s trying to make that idea a tangible, wearable reality. The proposed shirt will feature the faces of over 50 successful STEM women in black-and-white, ranging from Mae Jemison, the first African-American woman to travel to space, to Barbara McClintock, who received a Nobel Prize for her discoveries in the field of genetics. And if you donate at the $500 level, a female scientist, engineer, or mathematician of your own choosing will be added to the collage, as long as she made significant achievements in her career.

Go ahead and wear some badass women on your sleeves.

The final product will be pricey at $75, but all of the proceeds left over after production will go to the National Girls Collaborative Project, which works to get young women involved in the STEM fields.

“This is a nonprofit endeavor,” Zupko says. “The point is education, awareness and inspiration for all people who want to see advancement in science, technology, engineering and mathematics through closing the gender gap.”