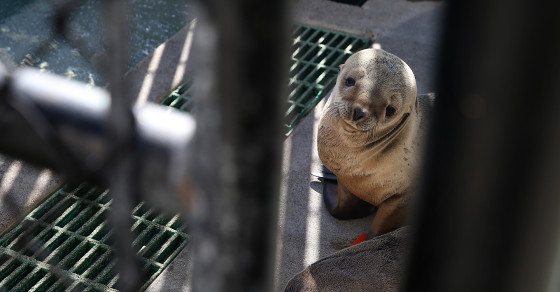 Thousands of Baby Sea Lions Are Stranded In California

More than 1,800 sea lion pups have been stranded on Southern California beaches this year–up by a magnitude of 20 since 2014. The numbers of pup “strandings”—when a marine animal floats onto the shore and becomes stuck—was 20 times higher for the months of January and February in 2015 than California’s monthly average, according to the National Oceanic and Atmospheric Administration.

The NOAA contends that the large number of helpless pups is most likely due to sea lion prey becoming less available–sardine spawning grounds have shifted further offshore in the past few years. Experts believe the pups’ food supply is shifting out of reach because climate change is warming local, inshore waters by five to seven degrees above average. NOAA have also said that they have declared the onset of an El Niño pattern in March of 2015, and while they predict it’ll be weak, it still adds to the localized warming.

More Extreme Snow Is A Symptom Of Climate Change

Local care facilities are trying to save has many of the creatures as they can, taking in more stranded pups this year than all the years between 2004 and 2012 combined, KTLA reports. Sea World has also stepped up, taking a break in their sea otter shows to help rescuers care for 500 pups. All these facilities have been strained to their breaking points.

Regardless of these efforts, many of the pups are found in weak condition, with the weakest among them having to be euthanized.

The high number of strandings and deaths hasn’t yet affected the overall California population, most of which is healthy and doing well thanks in part to the federal 1972 Marine Mammal Protection Act, under which sea lions are protected.