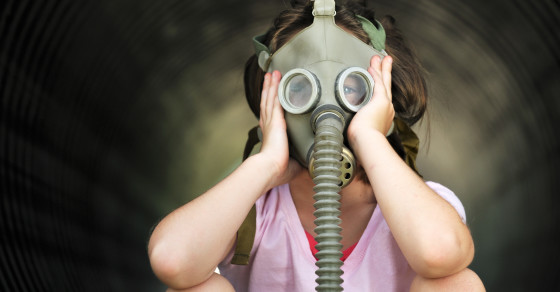 Common air pollutants may have a detrimental effect on a child’s developing brain, according to a recent study in JAMA Psychiatry. The findings are the first to correlate long-term exposure to dyes, plastics and pesticides with MRI results that suggest these airborne chemicals may damage the surface of the brain, potentially contributing to ADHD and other behavioral problems.

More Report: Air Pollution Might Cause Alzheimer’s in Children

Scientists from Columbia University and Children’s Hospital Los Angeles followed 40 children from low-income minority communities in New York City (where air pollution levels are especially high), and periodically collected MRIs of their brains from before they were born until they were about nine years old. When the researchers tested each of the children for polycyclic aromatic hydrocarbon exposure (PAHs) at age five, they found a correlation between exposure to air pollution and abnormalities in the parts of the brain responsible for intelligence and concentration. In 2012, a study conducted by the same team found similar correlations between PAHs and developmental delays.

Air pollution is ubiquitous, especially in cities and low-income neighborhoods, and so this study could have important public health implications. However, the researchers only examined one minority population. And although they conducted intelligence tests as well as MRIs over the course of many years, with such a small number of participants it is virtually impossible to draw any meaningful conclusions.

The researchers are now in the midst of a much larger study, which may shed more light on the potential dangers of airborne pollutants, especially for developing brains.