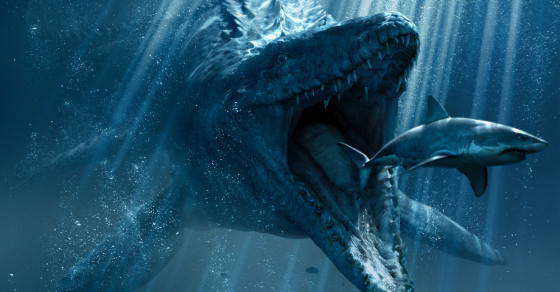 Here’s The Real Science Behind Jurassic World
By Joshua A. Krisch 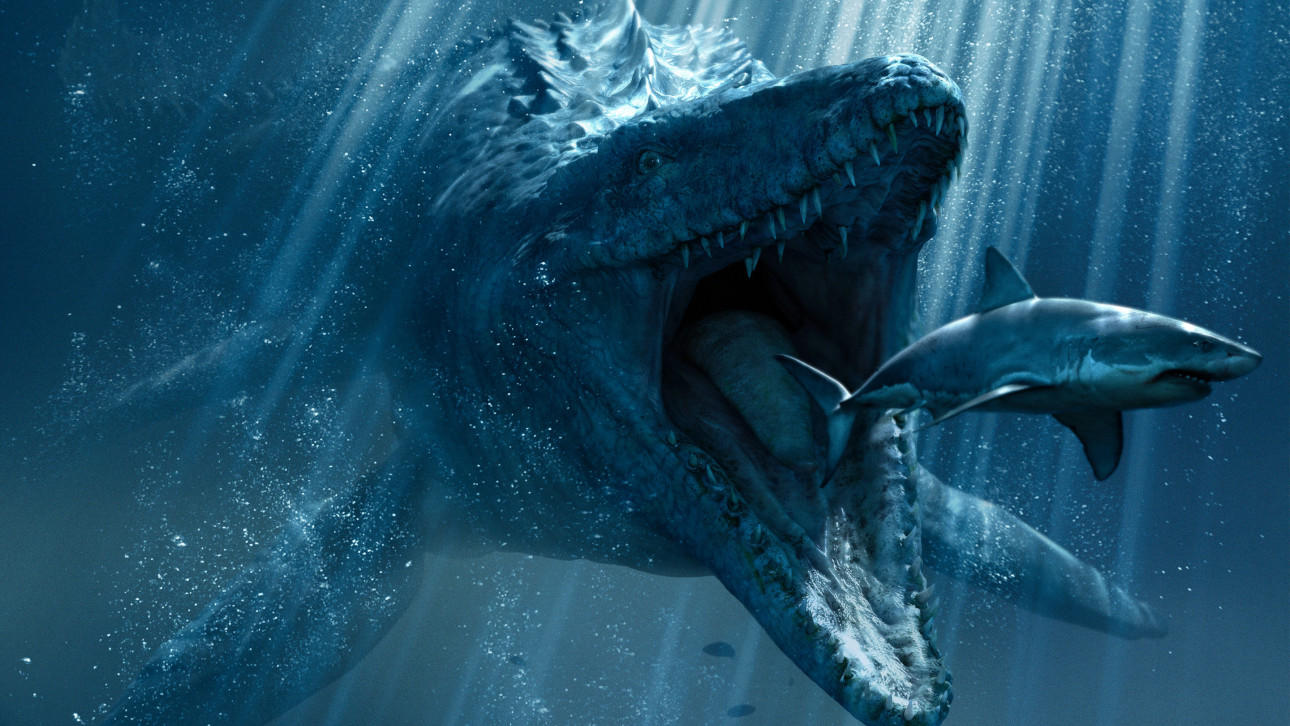 Jurassic World isn’t real. There, we said it. But Jurassic World’s undisputed status as fiction hasn’t stopped armchair scientists from declaring war on director Colin Trevorrow for completely ignoring the fact that real dinosaurs had feathers. Just like in Jurassic Park, the dinosaurs in the movie don’t have feathers (presumably because real dinosaurs looked stupid).

But nobody’s talking about the rest of the science. Can we clone dinosaurs? Would ankylosaurus smack down an Indominus Rex? Were pteranodons always scarier than Hitchcock’s birds? What the heck was a Mosasaur, and can I have one? To find out more about the science behind Jurassic World, we spoke with Daniel Barta, a PhD student in paleontology at The American Museum of Natural History.

Did Any Of The Dinosaurs Look Right, Or Did Jurassic World Ruin Everything?

"Get off, me Colin, for the love of God, I'm gonna miss my damn train again."

Barta admits that the feather debacle was a downer, but says that many of the dinosaurs didn’t turn out so bad. “A lot of the herbivorous dinosaurs looked OK, particularly apatosaurus,” he says. “One thing they did get right was that all of the baby dinosaurs in the petting zoo looked very different from adult dinosaurs.” Baby dinosaurs went through drastic changes, even to their skeletal structures, before maturing into grown-up prehistoric beasts. For instance, “triceratops horns pointed backwards, and as they grew up they turned forwards,” said Barta. At least in that regard, the movie got it right.

Tell Us Everything About Velociraptors

Method actor Christ Pratt hung out with real raptors to prepare for this role.

In Jurassic World, raptors hunt together, communicate in weird raptor voices, catch scents like reptilian bloodhounds and imprint, or take on the traits of their “alpha” (played by equally featherless human Chris Pratt) . Surprisingly, Barta says there’s a scientific basis for a lot of those decisions. “Imprinting is analogous to what some birds will do, and since we know birds are dinosaurs, imprinting is a plausible behavior,” he says. Following the same logic, it makes sense that if birds can communicate vocally, dinosaurs may have had that same ability. As for hunting in packs, fossil evidence suggests carnivorous dinosaurs lived in groups, although claims that they hunted together are based largely on a single fossil find in Montana, where scientists discovered several raptor fossils surrounding their last meal. Alas, Barta says, “whether they were working together cooperatively to hunt this dinosaur, we may never know for sure.”

Could I Outrun A Tyrannosaurus Rex?

If you were a real human you'd be dead by now.

In the film, velociraptors can run up to 40-50 mph when hungry, but somehow the humans always get away. What gives? “We do know they were able to run, and some may have reached speeds of 20-30 mph,” Barta says. “But most carnivorous dinosaurs would have been going slower. Recent biomechanical modeling studies have suggested that T-Rex was probably not as fast as the Jurassic Park movie suggests.” So in the first film, when T-Rex chased a jeep, that was a big, prehistoric, Hollywood stretch.

What The Heck Was A Mosasaur?

Mosasaur. Not that big in reality, but delicious seared with some wasabi & avocado.

The best dinosaur in Jurassic World was clearly the mosasaur, the giant underwater lizard that ate sharks for breakfast. Unfortunately, it wasn’t a dinosaur. “Mosasaurs are actually most closely related to lizards and snakes,” Barta says. “They’re essentially big, seagoing lizards.” Fine, but that’s a technicality. They were still enormous, shark-eating nightmares, right? Wrong. “One thing the movie definitely got wrong is that mosasaurs were much smaller than that,” Barta says. “In the movie, it looked about whale-sized. In reality, the largest mosasaurs were probably 40 feet in length.” So mosasaur, the coolest, biggest, baddest dinosaur in the whole movie wasn’t even a dinosaur and wasn’t all that big. Fortunately, Jurassic World got something right about mosasaurs: “Mosasaurs really did have these strange teeth on the roof of their mouths,” Barta says. “And in the film, when it opens its mouth wide, you can see the teeth in there. As for whether they leapt out of the water to attack dinosaurs…it’s hard to frame a testable hypothesis.”

Could Pteranodons Pluck Humans Out Of The Water?

Pteranodons. As dangerous to humans as Amazon delivery drones.

OK, first the bad news: they’re also not dinosaurs. Those flying reptiles were pterosaurs, close evolutionary cousins of dinosaurs, but from a slightly different genetic line. Now for the good news: they couldn’t pick you out of a swimming pool. “One thing the movie got wrong is that pteranodons were not able to pick up people and carry them,” Barta says. “Their feet could not grasp things, like birds’ feet.” But, after three films erroneously sold us toothy pterosaurs, Jurassic World finally got it right—pteranodons lacked teeth. As for their hunting habits in the film, Barta is less enthusiastic. “They were definitely ocean-feeders, and with a toothless beak they were likely eating fish,” Barta says. “But to figure out how far they would have dived under water to get fish, more study is needed.”

The Herbivores Seem So Gentle. Is That Realistic?

In the film (as in the Flintstones), triceratops and apatosaurs are the most gentle creatures in the park. But just because they wouldn’t have eaten you doesn’t mean they wouldn’t have tried to kill you. “One of the most dangerous animals in Africa is the hippopotamus, a herbivore,” Barta points out. “Elephants and rhinos are also incredibly dangerous when threatened, but if you leave them alone they’re fairly docile. Like most large animals today, herbivorous dinosaurs could probably turn violent, especially when defending their babies.” Some of the herbivores were likely suited for battle. Ankylosaurus, who stands its ground against Indominus Rex in the movie, probably fought just as valiantly in real life. “People have speculated about the function of ankylosaurus armor for a long time, but it seems plausible it was for protection. And that large club on its tail, to my mind, would have made a fairly good defensive weapon.” Lesson learned: pet the herbivores all you want, but stay away from their babies.

Can We Clone Dinosaurs? Are We Even Close?

"How come you can make a goddamn dinosaur but not a good cup of coffee, Katashi?"

“We are actually a very long way from cloning extinct dinosaurs,” Barta says. It’s not that the science of cloning hasn’t come a long way since Jurassic Park first captured our imaginations with mosquitos in amber. But to clone a dinosaur you’d need dinosaur DNA, which simply can’t last 65 million years—in amber, or otherwise. “It’s highly unlikely we’ll ever be able to recover enough DNA from something like a tyrannosaurus to ever make a complete clone of it. There’s the potential that someday we may recover fragments, but not really enough to clone an animal.” Ironically, Barta explains, it’s more likely that scientists could engineer a hybrid maniac dinosaur like Indominus Rex than recreate an original dinosaur in all its glory. “If you can clone dinosaurs, you can also do gene splicing,” he says. “The major barrier is cloning them in the first place.”