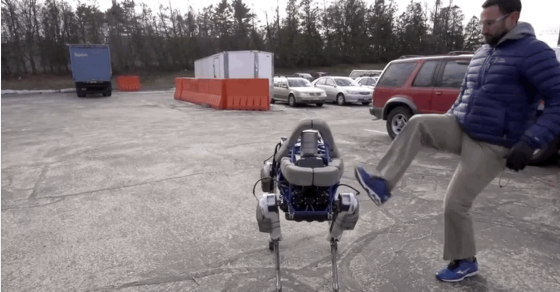 Robot Ethicist: Chill Out About The Guy Who Kicked The Robot Dog
By Eric Markowitz

Robot Ethicist: Chill Out About The Guy Who Kicked The Robot Dog

Everyone knows that it’s not OK to kick a real dog, but how about an android dog? According to Kate Darling, a roboethicist at MIT, this very question is becoming a hot discussion in the world of roboethics.

On one hand, letting humans have at their robot animals might be harmful, because it could lead to real violence. On the flip side, it could also be the other way around, where “people relieve their violent tendencies by taking it out on robots,” she says. There just isn’t enough evidence just yet to answer this question conclusively.

Over the last couple of days, thousands of people have commented on the unusual video of an engineer at Boston Dynamics booting the company’s hyperrealistic new robot dog, Spot, in a parking lot to demonstrate its sturdiness. Some said they were confused. Others said it was inappropriate. Even PETA issued a statement.

But Darling says not to rush to get all sentimental for Spot. Darling is actually excited that this video exists—it’s bringing so much attention to her nascent field, which looks at how humans interact with robots. But it’s way too early to start circulating a “Humans Against Cruelty to Robots” petition. “I take the stance that it is wrong as soon as it leads to a desensitization of the population,” Darling says.

I can't help but feel like it's wrong to kick a robot https://t.co/dawdiZMMDG pic.twitter.com/h44AL41fBz

In other words, there’s just no research to prove there’s actually anything unethical or potentially damaging about this sort of behavior.

Darling is a young pioneer in robot ethics, a growing field of inquiry that analyzes how we, as humans, design robots to have emotions, as well as the ethics of treating (or mistreating) robots. After all, there’s no doubt that more robots will be introduced into our lives over the next decade. So it’s only natural that we start thinking about how we should or should not treat them.

I also reached out to Boston Dynamics, the company that created Spot and released the video. In an email, I asked if the company followed any sort of guidelines when testing out the robots and producing the promotional material. “The only purpose of kicking the robot is to show the effectiveness of the balance mechanism that makes it possible for the robot to walk on rough terrain,” the spokeswoman wrote to me.

She didn’t mention if she personally felt bad for Spot.