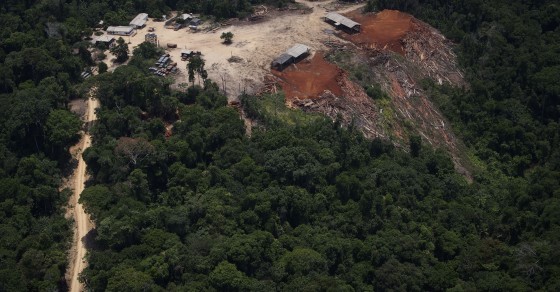 A recently released analysis of satellite images taken over the past 25 years has found that the world’s tropical rainforests are being cut down faster with each passing year. The findings contradict a previous U.N. assessment that reported a 25 percent slowdown in deforestation over the same period.

Using 5,000 photos taken with NASA’s Landsat mapping satellites, researchers from the University of Maryland and the American Geophysical Union found that the rate of deforestation climbed 62 percent between 1990 and 2010. That’s a jump from 15,000 square miles of forest cleared annually to 25,000 square miles burned or cut every year. To put that in other terms, we are destroying an area of virgin forest roughly the size of West Virginia every 12 months and one the size of New Mexico every five years, with no end or slowing in sight.

Total Square Miles of Forest Lost (And Not Gained Back)

The most noticeable loss was in Brazil where the Amazon Rainforest has been at the center of the debate. From the 1990s to the 2000s, losses in that country accelerated by 33 percent. Overall, Brazil has lost approximately 27,000 square miles in the last 25 years—an area as large as Ireland or roughly three times the size of New Jersey.