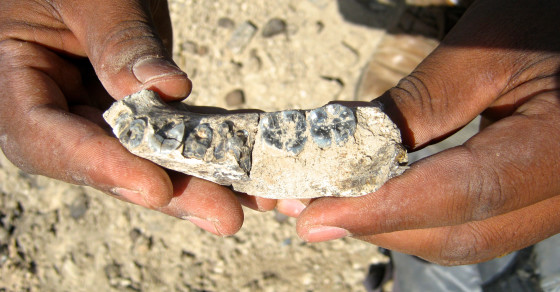 Oldest Human Fossil Discovered In Ethiopia
By Joshua A. Krisch

This 2.8 million-year-old jawbone may be the oldest human fossil in existence, according to two papers published simultaneously in Science. Researchers now suspect that Homo (the genus that includes modern humans) dates back at least 400,000 years earlier than previously thought.

For decades scientists have been scouring Africa for ancient human remains. Archaeologists think Homo habilis, the first truly “human-like” primate, lived about 2.5 million years ago, and Lucy, the human-ape mashup who is perhaps our most famous ancestor, lived about 3.2 million years ago.

But this particular fossil, found in the Afar region of Ethiopia and temporarily named LD 350-1, appears to be a new type of Homo that falls right between Lucy and Homo habilis. The fossil’s slim molars and proportionate jaw are hallmarks of habilis, for instance, but its primitive chin looks a lot more like Lucy’s. For now, the researchers are calling their discovery “Homo species indeterminate,” as they still aren’t exactly sure what it is.

Most 2.8 million-year-old fossils are too ancient to date by conventional means, so the researchers sampled volcanic ash above and below the jawbone and then used argon40 dating to determine the age of the eruption that formed each sample. The results give us the youngest and oldest dates that the hominin who owned LD 350-1 could have lived—2.5 and 2.8 million years ago, respectively.

Scientists also discovered prehistoric antelope, elephant, hippopotamus and crocodile remains nearby, and several members of the international team behind LD 350-1 analyzed these fossils to learn more about the ecosystem in which our newest addition to Homo existed. Based on the nearby wildlife, researchers think early Homo lived in an open grassland environment—a stark contrast to Lucy’s forested habitat. But whether mass climate change 3 million years ago encouraged this shift from the forest to the prairie (and, by extension, from ape to modern human), still remains to be seen.

A virtual reconstruction of the 1.8 million-year-old Homo habilis jawbone.

In a related paper published in Nature, scientists digitally reconstructed the deformed jawbone of a 1.8 million-year-old Homo habilis specimen. This new model suggests habilis had a surprisingly primitive jaw, and so may have originated earlier than once thought. These findings also strengthen the notion that LD 350-1 represents a bridge between ape-like Lucy and our modern human ancestors.