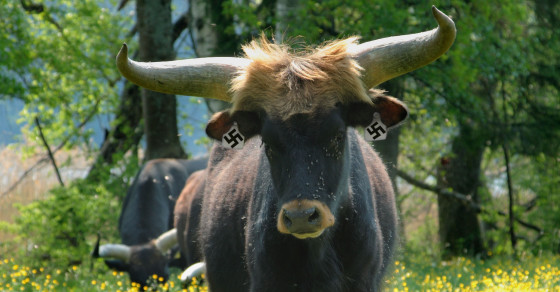 Heil Heifer! This Farmer Is Raising Killer Cows First Bred By Hitler
By Joshua A. Krisch 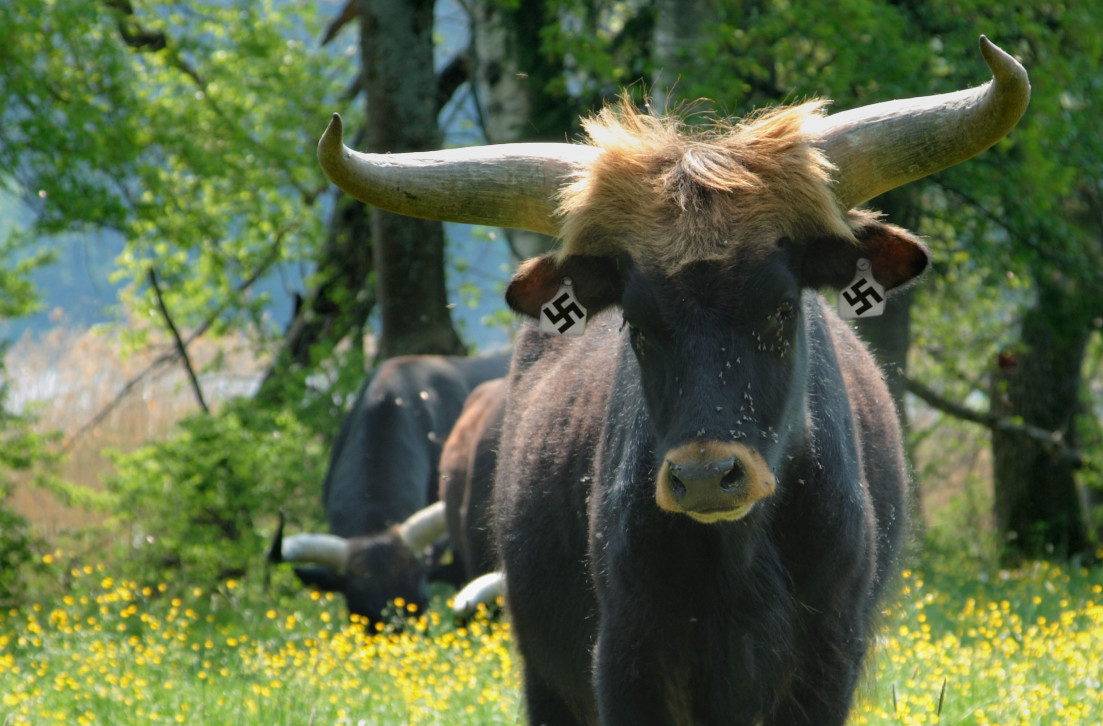 Fear the mighty aurochs! Julius Caesar described them as beasts the size of elephants. The knights of German lore were said to have drunk from their gilded horns. Archaeologists believe that these enormous wild cows are the same ox-like creatures depicted in many prehistoric cave paintings.

By the mid-1600s, the aurochs had gone extinct. Then Nazi eugenicists came along. Determined to create a master race of cattle (to be hunted, naturally, by a master race of humans), Third Reich scientists bred the largest and most aggressive cattle they could find—cows they believed were descendents of the aurochs. Their efforts produced a terrifying new species known as Heck Cattle.

Today herds of aurochs wannabes are still grazing in nature preserves across Europe. But only one farmer is brave (or crazy) enough to host a herd of wild Nazi cattle on his private land. Derek Gow, 49, owns a farm in the southern British county of Devon, where he keeps nearly 1,000 sheep and 100 beef cows. But Gow also raises a number of exotic—and very aggressive—mammals, including rare breeds of otter, wild boar and, until recently, about 20 Heck Cattle.

Derek Gow on his farm with a European water vole.

Gow wants to prevent these unusual species from vanishing entirely. But the Nazi-bred Heck Cattle are just too scary to keep around. Gow says he can’t even enter the cow enclosure on foot. He is perhaps the only farmer in the world who has to drive a car through his grassy pastures for his own safety.

Over the past year, Gow has been forced to cull the Heck herd down to six—getting rid of the most ferocious of the lot—simply to avoid being gored by ferocious Nazi cattle every time he steps onto his own land. We caught up with Gow to find out what it’s like to be stalked every day by huge, murderous cows.

Heck Cattle sound pretty awful. Why would you want to own killer Nazi cows in the first place?

There’s nobody else in Britain who has them, and we felt that there would be some demand over time for nature conservation purposes or film work, so we made an effort to obtain a small herd. But our main interest is in the story. In the 21st century, we consider cattle storybook animals that exist on farms, eat grass, give us milk and are called Daisy. That’s how we perceive their existence. But long before we started to domesticate cattle, wild cattle and horses were very, very common animals. The reason these animals are in cave paintings in such significant numbers (much greater than other species like deer) is because they were super abundant and people hunted them. It’s a story about these animals, and that’s, in part, why we wanted them here.

The Heck Cow has a roar that's pretty far from a moo.

Why did the Nazis try to revive the killer cattle?

Senior Nazis, like Hermann Göering and Heinrich Himmler, had been very keen to see these animals in hunting preserves, and they wanted these animals to be very fierce, because in old legends the big German hunters would kill these animals to take their horns as trophies. They didn’t want dairy cows; they wanted something pretty wild. They tried to recreate the aurochs through the process of de-domestication, selecting for wild characteristics and colors, until they resembled wild cattle. They also put Spanish fighting bulls into the mix.

That was one part of it. Another, more deeply sinister part of their support for this project was that this breeding program was developed at a time when people believed in the concept of eugenics. That is, by selectively breeding something, you could create something that was more elemental and more primeval. If you think that’s ludicrous for humans and horses, bear in mind that Himmler was very keen on doing this to humans as well. In that sense, there’s a really dark side to this story. It’s not all about a jolly hunting trip.

Are all of your Heck Cattle dangerous?

No. Some of the cows that we got were perfectly fine, just like domestic cattle. Calm, manageable. But other individuals were absolutely hopeless and very aggressive. You couldn’t walk through the fields where these animals were grazing, or they’d come out from the other end of the field and try to kill you. We eventually had to travel through the field in Land Rovers.

Have you ever had a near-miss with a Nazi cow?

We had one cow that was particularly wild, but we kept her for several years because she was a really good-looking animal, like something out of a painting. But she was an absolute killer. Nervous, shy and clever. Eventually, we decided that we couldn’t keep her anymore, and we tried to get her into a trailer. But she didn’t want to do that—she was too smart. The only way was to get one of the younger guys who works on the farm to stand on top of the trailer. When she charged him to try to kill him, he fell off the top of the trailer and she ran through to get him. It wasn’t the kind of normal experience you’d have with domestic cattle.

And now you are getting rid of some of the cows?

We’ve actually been making a concerted effort to do so over the past year. We just couldn’t work with animals that were this dangerous. We made a real effort. Now we simply sent them out to butchers, to be made into pies and whatever else. They taste like a cross between beef and venison, and in the future we are looking to develop a high-quality product. But right now we aren’t interested in branding—we are interested in getting rid of them as quickly as possible. They’re just too much of a pain in the ass…literally!