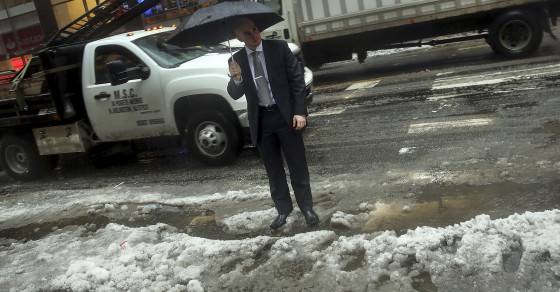 The National Weather Service Seems To Be Low-Balling This Storm

After forecasters took a hammering last week for incorrectly heralding the blizzard that never happened in New York City, it appears at first glance that the National Weather Service is issuing much more conservative winter storm predictions.

Here’s a prediction chart for Wednesday’s snowfall in Omaha, Nebraska. The green line represents the National Weather Service’s forecast—way lower than the ones from other weather prediction computer systems.

Now look at the prediction graph for the snow accumulation before last week’s East Coast blizzard (below). The green line is in a very different place. The NWS predicted 22 inches of snow for Newark, New Jersey, while other models predicted as little as 4 inches. New York City prepared for the worst, shutting schools and ending subway services based on the most alarmist data available (which just so happened to come from the NWS this time). The city received a little over 6 inches of snow despite the forecasts for up to 3 feet. It appears the storm shifted slightly east, meaning New York City was spared the worst of the conditions.

The reality is that models shift dramatically from storm to storm in relation to one another. Storms are volatile by nature and change trajectory as conditions evolve, and the correct forecast often lies somewhere in the middle of all available predictions. Chris Vaccaro, director of communications for the NWS, maintains that the NWS delivered the most accurate storm forecast for last week’s blizzard. “East of Manhattan, across Long Island and northward across southern New England, the forecasts of 1 to as much as 3 feet of snow were spot on,” he said.

Check out one final image from Gary Koble’s Twitter feed, which shows you how various prediction models (showing temperature this time) trade places over time in relation to one another. The first shall be last, and the last shall be first. Carry an umbrella.