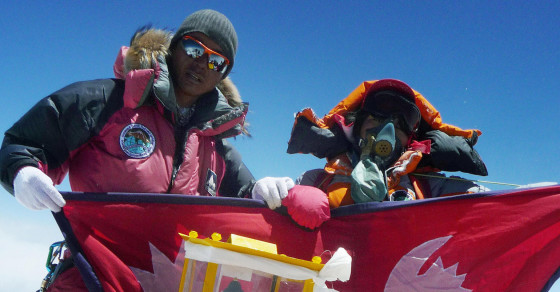 Cultural Baggage May Cause Mountain Climbing Disasters
By Joshua A. Krisch

Cultures that emphasize hierarchy and respect for authority tend to produce alpinists who either succeed wildly or fail miserably, according to a paper published Monday in PNAS.

Researchers reviewed more than 5,000 Himalayan expeditions and, after controlling for adverse conditions on the mountain, found that climbers from countries that champion social order, like China, were likely to make it to the top of the mountain or die trying. But countries like Austria, which have more liberal hierarchies, tend to summit (and die) less frequently.

“Hierarchy led groups to have the best and worst possible outcomes,” says Eric M. Anicich, a doctoral student at Columbia University and coauthor of the paper. “They were more likely to summit, but they were also more likely to die.”

Although Anicich specifically studied mountain climbers, he says that the results likely have implications for other high-risk team efforts. In the book Outliers: The Story of Success, author Malcolm Gladwell applies similar reasoning to explain why Korean and Colombian airlines have relatively high rates of plane crashes. From a New York Times Book Review:

Gladwell raises the notion that cultural traditions may play a role in plane crashes, that the 1990 crash of Avianca Flight 52 over Long Island, New York, might have had something to do with the pilots’ being Colombian. He quotes Suren Ratwatte, a veteran pilot involved in ‘human factors’ research, saying that ‘no American pilot would put up with’ being held up by air traffic control several times on its way to New York for more than an hour if he or she were running short of fuel.

More Why Birds Keep Crashing Into Cars And Planes

In the coming months, Anicich and his team will continue to study cultural biases and explore their effects, both positive and negative, on high-risk team efforts. “People’s culture travels with them and informs their view of the world,” he says. “Now we’re finding ways to maximize the benefits of hierarchy while minimizing the drawbacks.”