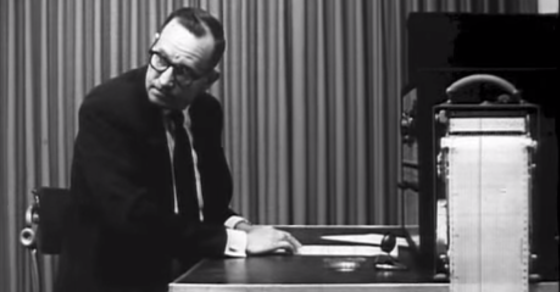 It’s easily the most disturbing study in modern psychology. Stanley Milgram invited students into his laboratory, where they were told to press a button that delivered increasingly painful electric shocks to a man in an adjacent room. The students did not know the man was an actor, yet despite his desperate pleas—”My heart’s starting to bother me… Let me out!!”—65 percent of them continued to crank up the voltage. Milgram concluded the average person is capable of extraordinary evil, especially when encouraged by a superior.

Now 50 years later, a new study has replicated Milgram’s infamous experiment and it calls this central conclusion into question.

Alexander Haslam, psychologist at University of Queensland and coauthor on the study, looked through Milgram’s notes and found that many of his subjects felt gratified and even happy to have contributed to the gruesome experiment. Milgram had effectively radicalized the students. “Obedience is not an ineluctable proclivity, but a choice,” Haslam wrote in 2011. “People do not deliver electric shocks because they are ignorant of the effects, but because they believe in the nobility of the scientific enterprise.”

Haslam had been itching to test this theory for some time, but re-creating the study as it was originally done would have put him on ethically shaky ground. Instead Haslem employed Immersive Digital Realism, a technique that involves training actors to immerse so deeply into character that a psychologist can actually draw conclusions from how the characters respond to adversity.

Under similar conditions to the original Milgram experiment, Haslam found the majority of his actor-subjects were willing to administer high voltage shocks; he also found that subjects who identified more strongly with the experimenter often delivered the most punishing voltages. And when the experimenter tried to force one subject to deliver a shock (“I’m sorry, Lana, you don’t have a choice”), she adamantly refused to continue.

The results suggest that perpetrators of great evil, from Nazis to modern terrorists, are unlikely to be soldiers mindlessly following orders, but rather participants in a cause they feel is just. Haslem concludes: “We should be wary not of zombies, but of zealous followers of an ignoble cause.”