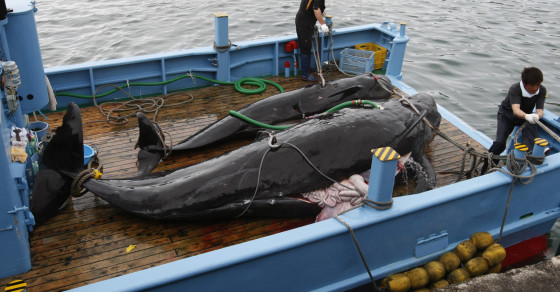 Japan is to minke whales as Hannibal Lecter is to humans, and it doesn’t seem that relationship is going to change any time soon. In an unusual rebuke, a group of experts who advise the International Whaling Commission have rejected Japan’s justification for resuming its whale hunts. Japan says it needs to hunt whales for scientific research, but an International Court of Justice last year found that it had hunted thousands of minke whales for commercial purposes.

In response to the ICJ finding, Japan last year agreed to a hiatus on its whale hunts, but said it would resume them this year. It also promised at the time to reduce the number of whales it hunts. For 27 years, Japan had been harpooning minke whales in the Antarctic in the name of “scientific whaling,” killing roughly 10,000 of them.

The proclamation issued by the International Whaling Commission experts is nonbinding, and Japan plans to ignore it.

We Killed Nearly 3 Million Whales in the Last Century (vocativ.com)