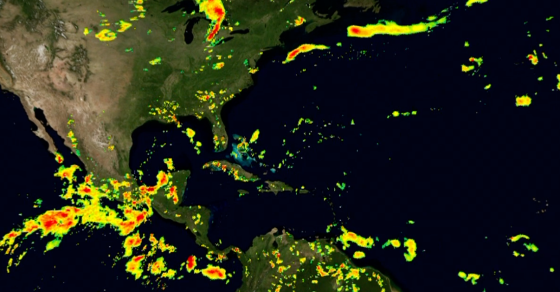 Here’s NASA’s First Global Map of Rainfall and Snowfall
By Joshua A. Krisch

NASA has just released its first map of rainfall and snowfall around the entire planet. The new data covers more of Earth’s precipitation than ever before and should help scientists better visualize (and predict) how rain and snow storms migrate across the surface of the earth. NASA coordinated with the Japan Aerospace Exploration Agency to compile data from a network of 12 satellites, and record results at three hour intervals over the course of one year.

Here’s a visualization of Earth’s past year in rainfall:

The findings were released to celebrate what NASA calls its biggest one-year increase in scientific research in more than a decade. Over the past 12 months, NASA has been collecting data on precipitation, carbon dioxide levels, ocean winds and particles in the atmosphere–shifting the agency’s focus from distant worlds to a our own planet, which we still know surprising little about.