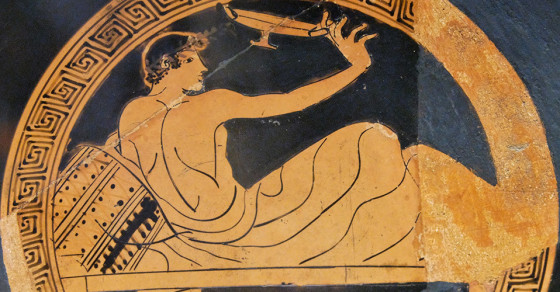 Here’s How The Ancient Greeks Played Beer Pong
By Joshua A. Krisch

We always knew the ancient Greeks liked to party, but now we have the lowdown on their favorite drinking game.

At their version of frat parties (called symposia), Greeks tossed back a few shots of spiced wine, reclined on the couch and played a game known as kottabos. It involved hitting targets by flicking dregs of wine from earthenware Solo cups called kylixes for prizes like pastries and sex. Heather Sharpe, an associate professor of art history at West Chester University in Pennsylvania, recently used a 3D printer to recreate the kylixes and tried her hand at an authentic round of kottabos.

More The FBI Is Battling With States Over Powdered Alcohol

She found that an overhand throw worked better than a sidearm flick, but she also noticed that the game could get quite messy. “You’d imagine that, by the end of the symposium, you’d be drenched in wine, and your fellow symposiasts would be drenched in wine, too,” Sharpe told LiveScience. In ancient Greece, slaves were forced to handle the cleanup.

For more info on her study, see her presentation to the annual meeting of the Archaeological Institute of America.