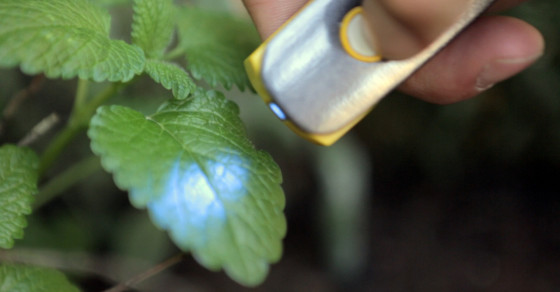 What Exactly Is in Your Food? The New Device Promises to Tell You
By Assaf Uni

What Exactly Is in Your Food? The New Device Promises to Tell You 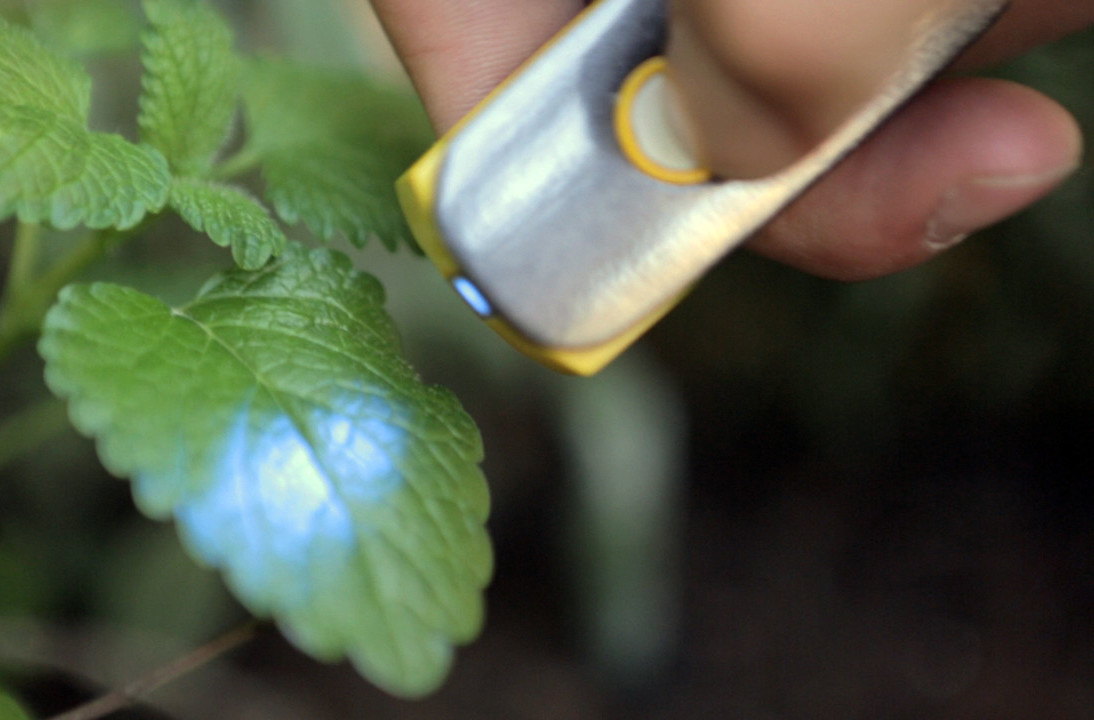 It’s close to midnight, and Dror Sharon is holding a ripe tomato in one hand and his smartphone on the other. He picks up a small, USB-looking device, and points it toward the vegetable. A flash of light appears, and Sharon holds up his phone to show that this particular tomato has 21 calories and 14 carbs.

Next comes a red apple: 86 calories, 24 carbs. Sharon then directs the device toward a slice of cheese. Now the app recognizes the fat content as well, in grams. Sharon eats the slice of cheese. “It’s been a very busy 24 hours,” he says cheerfully. “I only slept two hours, outside of our office, in my car.”

What happened 24 hours earlier was that Consumer Physics, the Israeli startup that Sharon heads, launched a Kickstarter campaign to help fund SCIO, which it calls “a pocket molecular sensor for all.” It’s a small device that can tell the composition of certain objects, mainly foods for now, but hopefully at some point lots of other things, too. The gadget, which connects to smartphones and has been in development for the past three years, became a sensation in Israel within hours.

The project has received almost $500,000 in pledges, more than double its original goal, and backers have come from various parts of the world.
Some Israeli bloggers have referred to it as a “device that will change the world,” with others noting the close resemblance to one of Star Trek’s most well-known objects. “Has anyone mentioned that the SCIO plus smartphone is pretty much similar to the Tricorder from Star Trek?” a user named Chris wrote on the fundraising page.

The team at Consumer Physics, which includes physicists, chemists, electrical engineers, food engineers and algorithm experts, managed to reduce the size of a normal spectrometer, which works by analyzing the properties of light passing through different molecular structures, and to connect it to a “spectral database” of samples via an app.

The company estimates it will deliver the device by year-end, and says that for now, it will focus on uses related to food and drugs: allowing diabetics to check how much sugar there is in a certain food, for example, or letting people vet the chemicals in a certain pill. It is also developing a SCIO app for plants, measuring if they need water, and how much.

But Sharon, 39, says the possibilities are endless, speaking last night after a product demo via Skype. “Cosmetics, diamonds, who knows how it can be used?” he says.

Spectrometers, often big and expensive, have been around for decades. Two years ago, another company, Public Lab, launched a Kickstarter that raised over $100,000 for a chemical spectrometer.

Consumer Physics has gotten fair amount of attention because it has shrunk the size of the device, reduced the price point significantly, and made it work with a smartphone. In short, it’s trying to come out with a device that is much more consumer-oriented than the typical spectrometer.

One challenge in doing that is that developers first need to create the backend code to “understand” each of the materials that’s being scanned, which is laborious. Consumer Physics has programmed its scanner to work with certain items, which include the foods that Sharon demoed for me. It is working on expanding the database by scanning other things, and hopes that the first round of users will help with that. Meanwhile, developers who want to build apps on top of the platform will need to buy the $399 developer kit.

Potential users have peppered the Consumer Physics team with questions. On the Kickstarter campaign site, one user promised to buy the product if it helps his grandfather measure how much sodium there is in his food; another asked whether it could differentiate among fabrics; and another user wondered whether he will be able to use the app when he goes collecting mushrooms, to tell the good fungi from poisonous ones.

The answer to that last question is similar to that of the often-asked question about spotting pesticides on produce: It will be difficult. The team wrote that the SCIO is designed to detect materials in concentrations of more than 1%, and many pesticides or poisons are usually lower than that. The company plans to develop apps for each field, some of them costing extra (people who buy the devices via Kickstarter may get this extra functionality for free for two years). It promises that “the food apps will include nutritional values, as well as quality measures (sweetness, ripeness); in medicines, you will be able to scan pills and identify them.”

Spectrographs are already being used in the food and drug fields, among other areas, but so far the uses are mainly the companies producing the items and the regulators, not the consumers.

The company has already raised “several million dollars” from Khosla Ventures, Israeli startup investor Dov Moran, the crowdsourcing fund  “OurCrowd” and others. Sharon is an electrical engineer who studied business at MIT and has been in senior roles in VC funds and startup companies. The Kickstarter campaign, he says, is less about raising money to fund the product, and more about getting a group of early adopters excited about it. “They are all there on Kickstarter,” he says.

A similar project, from a Canadian company called TellSpec, ran a successful crowdfunding campaign on Indiegogo last November. The company raised $386,000, and its CEO told backers recently that it is aiming to ship the first unit by June.

Sharon says he came up with the idea in 2010, while having dinner with his friend (and Consumer Physics’ CTO) Damian Goldring. “We talked about this scanner, and I was sure it had already been developed. Usually, if have an idea, I can assume somebody else already had it. I thought I will just go on Amazon and buy one for $50. But there was nothing there.”

“Three years later,” he says, as he lifts the device, “I am sitting here holding the product that we developed.”