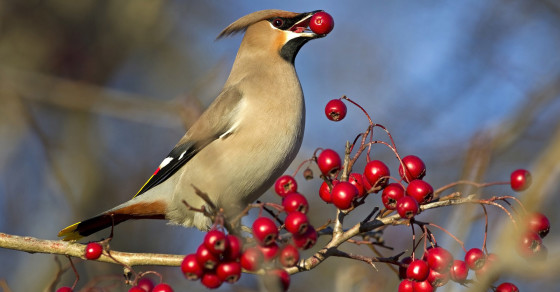 The cold weather has arrived, and with it comes the promise of comfort food-induced weight gain. This also holds true for the animal kingdom, with Canadian birds going to town on mountain ash berries ahead of the harsh winter.

But there’s a problem. These berries have started to ferment, and some of the birds in Yukon are getting, well, a little loaded.

A Bohemian waxwing getting its drank on.

“What happens around this time of year is that after the frost, the berries will ferment, and so the birds actually can get a little intoxicated from eating these berries, and they do in fact get drunk,” Meghan Larivee of Environment Yukon’s animal health unit told CBC.

And while that sounds pretty adorable, it can be lethal for the birds, who risk losing coordination. “So they’re flying around, but they’re not as good at avoiding obstacles,” added Larivee. “Hitting windows is not uncommon.”

To avoid the airborne FUIs, Environment Yukon has created drunk tanks out of hamster cages to treat birds they see flying under the influence.

Larivee tells Vocativ that they rely on the public to bring in any birds they see behaving strangely. Three Bohemian waxwings were brought in last week; two died from their injuries, but the third recovered and was later set free.