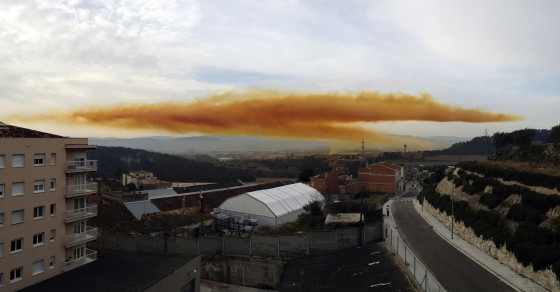 Officials have announced an all clear after an explosion in the Spanish town of Igualada, just outside the city of Barcelona, injured three people and sent a bright orange cloud into the sky. The blast happened at a chemical distribution company when loads from two different trucks were accidentally mixed, according to local newspaper La Vanguardia. Authorities closed sections of the nearby highway and railroad.

As the cloud loomed over the city, Catalonian emergency services urged parents not to attempt to try and pick up their children. They tweeted for people to remain calm, stay indoors and resist venturing outside to take pictures. Some residents ignored the warnings and took to the streets.

The emergency orders have since been lifted. An Igualada town spokesperson said the cloud has now cleared and things are returning back to normal, reported The Local. Children, pregnant woman, people with respiratory illnesses and the elderly are still being asked to stay in their homes.