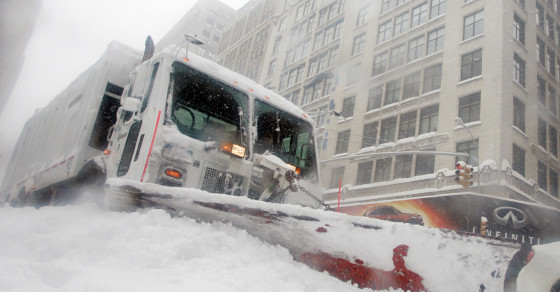 Extreme Snow Is A Symptom Of Climate Change
By Sarah Kaufman

Extreme Snow Is A Symptom Of Climate Change

Blizzards like today’s East Coast behemoth are directly linked to climate change, and they could become part of the normal pattern of how we experience snow. Many scientists hold that while the warming global temperatures may eventually reduce how much snow we see, blizzards and winter storms are likely to be more intense.

Here’s how it works: A warmer world means warmer air, which can carry more moisture. When that moisture meets air cold enough to produce snow, it has the potential to make huge amounts of it. According to Mark Serreze, director of the National Snow and Ice Data Center, speaking in 2013:

Strong snowstorms thrive on the ragged edge of temperature—warm enough for the air to hold lots of moisture, meaning lots of precipitation, but just cold enough for it to fall as snow.

But because temperatures are, on average, getting warmer, storms will hit that magic snow point less often, and we’ll see less snowfall in general. A 2014 study by MIT professor Paul O’Gorman found that snowfall overall would decrease by a whopping 65 percent by the end of the 21st century. The same study showed that extreme snowfall events would decrease by only 8 percent, however. So when blizzards do occur, you’re more likely to see the kind of forecasts the East Coast is preparing for right now, and because other forms of gradual snowfall will become less common, snowstorms will be how many of us get our snow, more often than not.