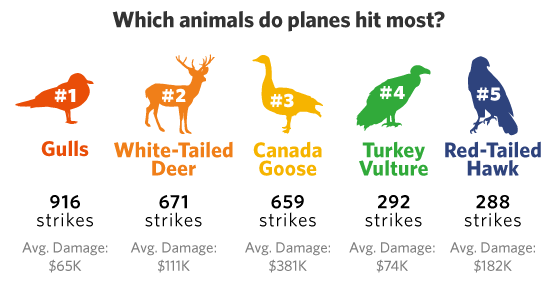 The Birds (And Deer) Behind Thousands Of Airplane Emergencies
By Joshua A. Krisch

The Birds (And Deer) Behind Thousands Of Airplane Emergencies 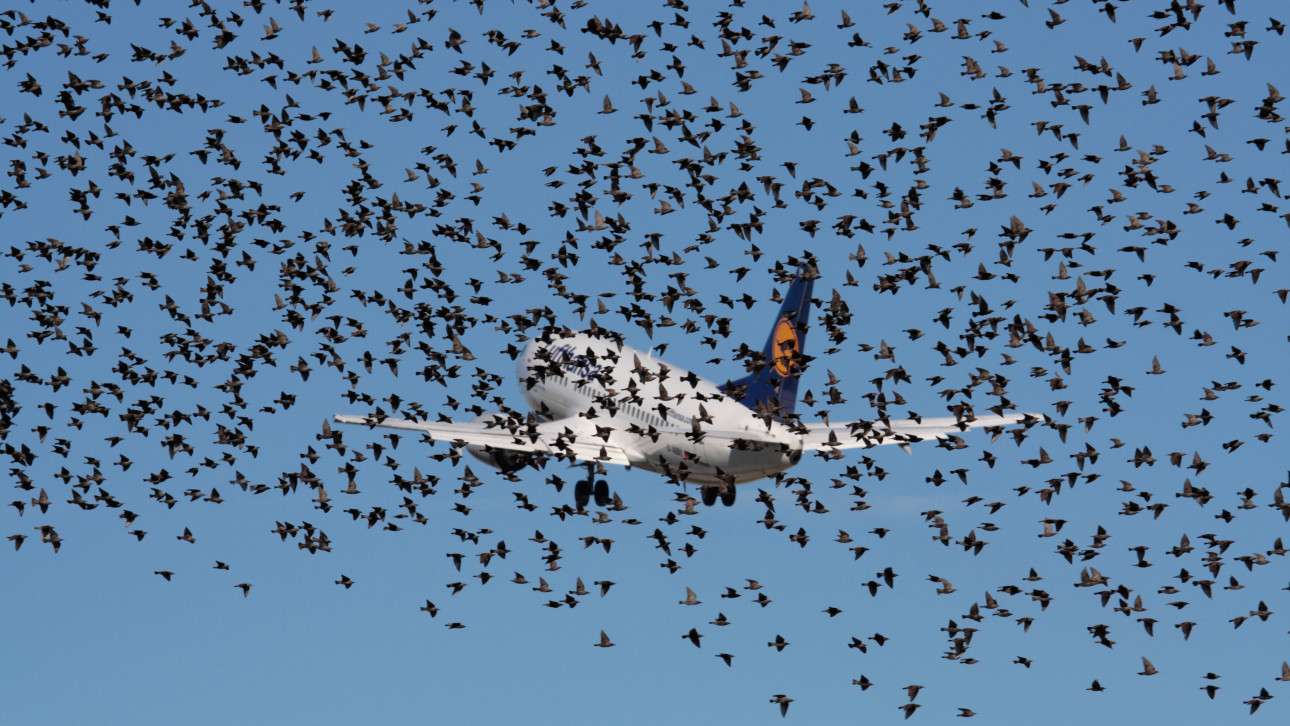 More than 11,000 birds smashed into airplanes in 2013 alone, and bird strikes in the air have killed at least 255 people since 1988. Sure, birds also suffer their share of collisions with cars, trains and small children on roller coasters, but when beak meets windshield on the road, the driver usually has time to pull over and survey the damage. In the air, things aren’t so simple.

More Why Birds Keep Crashing Into Cars And Planes

Vocativ analyzed 13,000 entries in the FAA’s Wildlife Strike database, reaching back to 1990, to identify which birds (and other animals) felled airplanes throughout the past quarter century. Strangely, white-tailed deer ran afoul of aircraft more often than most bird species. They also caused a ridiculous amount of damage—airplane repairs after a deer strike tend to cost $111,000, on average. 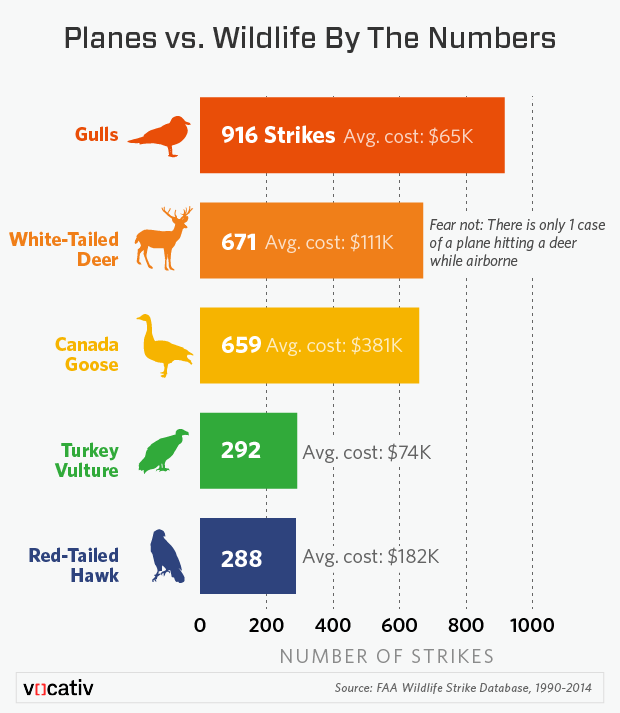 Overall, wildlife strikes have cost the industry about $483,000,000 in damages since 1990, but some airlines have been hit harder than others. Among major companies, American Airlines seems to bear the brunt of these costs—its jets collided with more than 1,000 animals over the past 25 years. Private aircraft, from business Learjets to tiny, single-engine propellor planes, hit 943 animals during that same period. 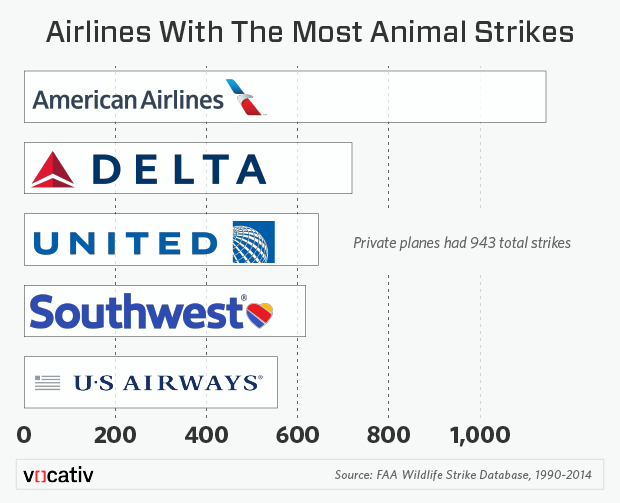 When these birds fly into engines—at least 3,519 birds have been sucked into airplane engines since 1990—the results aren’t pretty. Earlier this year, one such bird strike on Southwest Airlines forced the crew to land after flames began shooting out of the engine. And it was a Canada goose to the engine that forced US Airways Flight 1549 to land on the Hudson River, back in 2009. 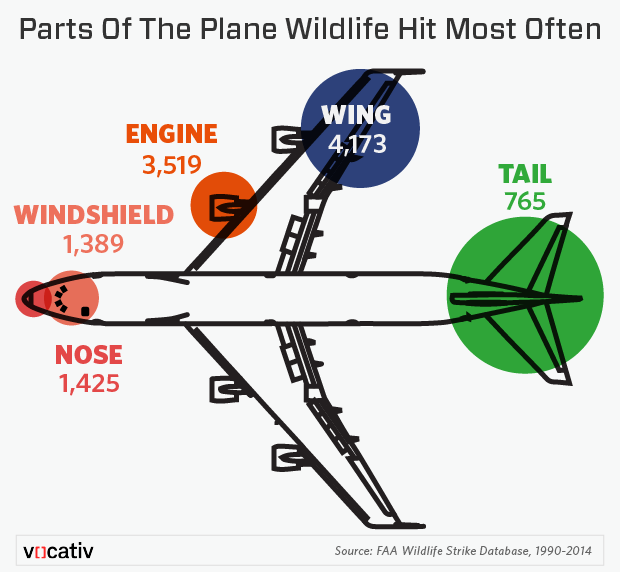 One of the most interesting aspects of the database is the “Remarks” section, which includes the sordid details of each wildlife strike. For instance, here’s what the database has about an airplane that somehow managed to hit one hapless deer while it was still in the air:

As pilot was accelerating to 55 MPH he noticed 2 deer entering RWY. He tried to fly over them but A/C struck the deer 3-4′ above the ground. A/C descended to RWY…& slid to a stop. Damage was substantial. Pilot had minor injuries.

Or this particularly horrific bird strike on a helicopter, which resulted in eight fatalities and one critical injury:

Both pilots and six of seven passengers on board were killed…wildlife biologists assisted the NTSB team in collecting biological DNA and feather samples from the windshield, which was sent to the Smithsonian feather ID lab. The windshield has several ring-shaped fractures. Analysis of the sounds on the cockpit voice records reveal a sudden, loud bang followed by an intense rush of wind…Lawsuit pending.

Scientists say these disasters occur because many birds gauge their risk of collision by distance, not speed. In a recent study of cowbirds, researchers found that the birds begin to flee only when an approaching vehicle is about 100 feet away—no matter how fast it is traveling. For evading predatory hawks, that’s fast enough; for dodging a 747, not so much.

Installing pulsating lights on airplane wingtips may help alert incoming animals from afar, scientists say. And in general, pilots would be well-advised to bypass flying over areas rich with wildlife. “Avoid areas such as marshlands and landfills because birds like to congregate near them,” writes the Aircraft Owners and Pilots Association. “Also, avoid flying beneath a flock of birds. When birds sense danger in the air ,they have a tendency to dive.” 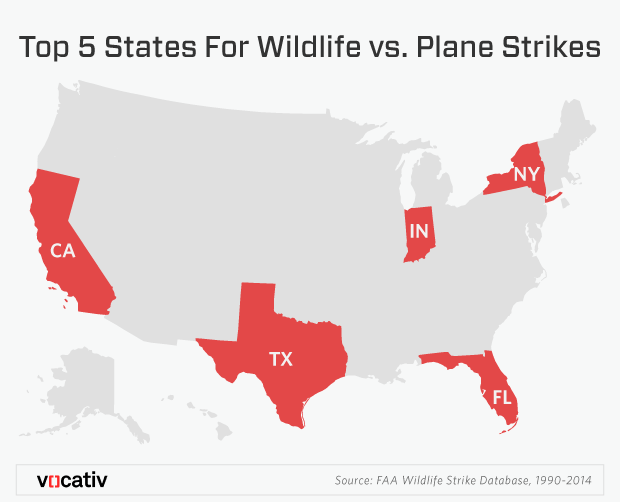