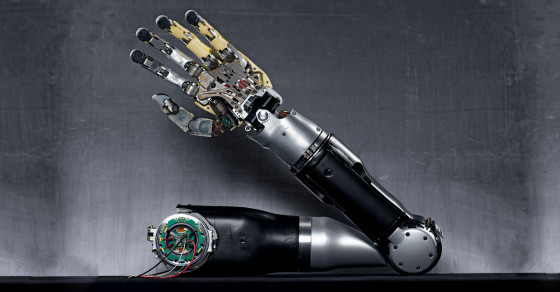 Bionic Arms Just Got A Huge Breakthrough
By Joshua A. Krisch

Bionic hands are plentiful. Problem is, most injury victims can’t use them. But an innovative surgical procedure could change all that, according to a new study.

Even three years ago, we had at least one mind-controlled robotic arm that could ostensibly grip with the speed and skill of a human hand. But bionic arms rely on strong electrical signals sent from healthy nerves. And many people who need prosthetics—like victims of crushing injuries during industrial or motor vehicle accidents—have irreversible nerve damage.

The new study involved three Austrian men whose nerves were mangled in motorcycle accidents that rendered their hands swollen, rubbery and useless—exactly the kind of people who can’t use conventional prosthetics. In an attempt to boost the signals coming from their nerves, surgeons transplanted healthy muscle from each man’s thigh into his arm. Over the course of several months, the men learned to activate those muscles to control a robotic hand that was splinted onto their arms. Ultimately, each chose to amputate his injured hand and replaced it with a fully functional robotic version. Here’s a video of the progression from useless hand to badass bot:

Three months after the amputation, the patients are recovering nicely. For the first time in 17 years, one man was able to pour himself a cup of apple juice and button his own shirt. These results are particularly promising for the tens of thousands of people who are unable to use their hands because of serious injuries, and unable to operate prostheses because of damaged nerves.