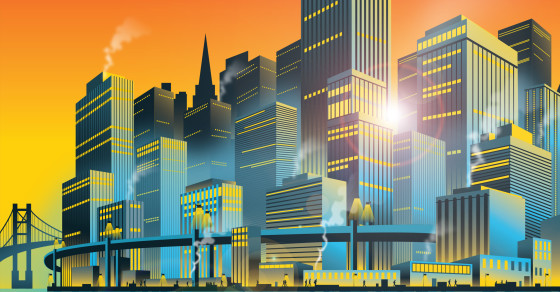 Ancient Civilizations Held The Key To Gotham’s Growth
By Joshua A. Krisch

New Yorkers long ago traded pyramids for skyscrapers and ditched human sacrifice in favor of lunch from a food truck. But modern cities actually develop in much the same way as ancient civilizations, according to a new study. Mathematical formulas may be able to capture how all cities grow, the scientists say, by examining the balance between the benefits of working with others versus the costs of moving around.

Anthropologists have long understood that all successful modern cities develop via a sort of supply-and-demand phenomenon known as urban scaling. Food production, for instance, typically outpaces population growth, while population growth often outpaces the number of buildings to live in (sound familiar?). But after examining archaeological data from Mexico, including thousands of ancient temples and houses, the researchers were surprised to find that the rules of modern cities almost perfectly matched those of ancient settlements.

One of the major findings was that the massive pyramids and palaces of the Aztecs conformed to the same mathematical rules that govern modern skyscrapers and monuments. In both societies, you can figure out approximately how long it will take to build a certain structure by calculating its size and comparing that with the number of people living in that area.

Here’s that math (only for the brave):

Average public monument construction rates should be proportional to the population of subject settlements to the 7/6 power, or more formally, Y = G N2 /An ∼ N2 /N5/6 ∼ N7/6

In a nutshell, the more densely populated the city, the faster it builds, even when it comes to less-than-functional structures like pyramids, monuments and some skyscrapers. This equation allows us predict just how quickly any building will shoot up, based on how many people surround the site. Here’s how that looks: 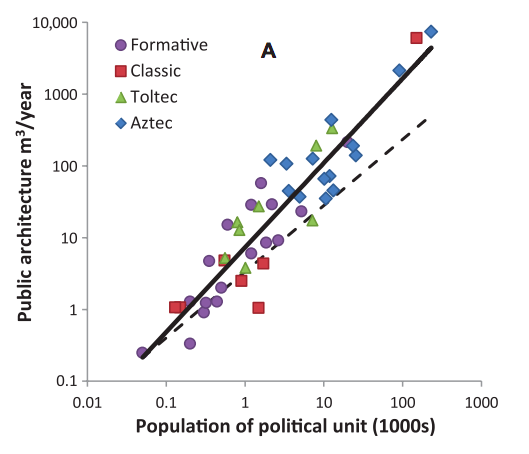 The results imply that future cities will follow similar patterns of growth. It remains to be seen, however, whether or not the Internet’s social networks and digital cities will ultimately challenge that time-honored dynamic.

“It was shocking and unbelievable,” Scott Ortman, an anthropologist at University of Colorado, Boulder, and co-author on the study said in a prepared statement. “We were raised on a steady diet telling us that, thanks to capitalism, industrialization and democracy, the modern world is radically different from worlds of the past.” Apparently not.