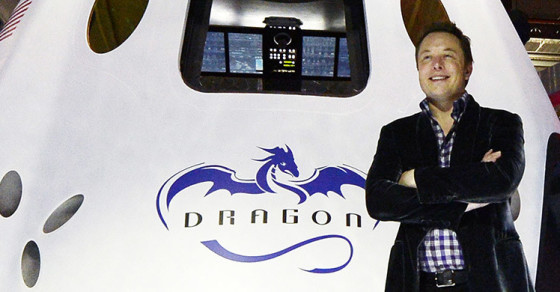 Elon Musk’s private space company was hoping to make aerospace history this morning by gently landing a 14-story rocket on a barge in the middle of the Atlantic Ocean. Typically, the $54 million rockets are a one-shot deal. This SpaceX mission is crucial to proving that it’s possible to reuse rockets from flight to flight, just like we do with airplanes. That would go a long way toward making space tourism more economically viable.

But only a few hours before the planned liftoff, the mission was scrubbed because of technical concerns. SpaceX will take another stab at the launch on Friday. Last night, undaunted by the big launch, Musk took to Reddit to answer a few questions about private space travel, artificial intelligence and, yes, video games. Here are a few of the highlights from his official AMA.

“Our spacesuit design is finally coming together and will also be unveiled later this year. We are putting a lot of effort into design esthetics, not just utility. It needs to both look like a 21st century spacesuit and work well.”

Humans won’t be able to get very far without better spacesuits. Most of NASA’s current models are expensive, bulky outfits that are built for only low-Earth orbit and have no place outside of a spacecraft. Those few models that are built to withstand a proper space walk are, according to one recent report, often “less of a garment than a multimillion-dollar spaceship packed with liquid-cooled plumbing.”

Of course, it’s not just about quality—it’s also about style. In an initial contract with Orbital Outfitters, SpaceX explicitly stipulated that the new spacesuits must look “badass.” Currently, spacesuits are very far from looking “badass.” But some companies, like Final Frontier Design, are off to a good start.

On a Private Mission to Mars

“Goal is 100 metric tons of useful payload to the surface of Mars. This obviously requires a very big spaceship and booster system.”

Musk has been talking about human exploration and settlement of Mars since 2007, but details have been slow to materialize. For a while now, our only real lead has been the Mars Colonial Transporter, a relatively vague SpaceX project that aims to put human beings on Mars by 2026. Elon Musk will be 54 years old by then, but at least he’ll beat NASA to the punch—the space agency does not plan to put a human on Mars until the mid-2030s.

Now we finally have some concrete specs for the mysterious MCT: 100 metric tons is an impressive payload, especially since NASA has so far managed to land only 1 metric ton at a time on the surface of Mars. Still, a long-term mission would likely require at least 200 metric tons. As for passengers, Musk has boasted in the past that his transporter will eventually be able to carry up to 100 Mars tourists to the Red Planet in a single trip. That’s enough space for a decent-sized wedding party.

On the Rise of the Machines

“The timeframe is not immediate, but we should be concerned. There needs to be a lot more work on AI safety.”

Back in October, Elon Musk discussed his views on computer singularity at an MIT symposium, reigniting fears of SkyNet. His concern, that artificial intelligence could ultimately outpace (and outgun) humanity, might just be science-fiction. Still, Musk’s predictions, from that same symposium, are terrifying:

“I think we should be very careful about artificial intelligence. If I had to guess at what our biggest existential threat is, it’s probably that…I’m increasingly inclined to think that there should be some regulatory oversight, maybe at the national and international level, just to make sure that we don’t do something very foolish. …With artificial intelligence we are summoning the demon. In all those stories where there’s the guy with the pentagram and the holy water, it’s like—yeah, he’s sure he can control the demon. Doesn’t work out.”

On the Tesla Model 3

When he’s not revolutionizing private space travel, Musk designs electric cars. In 2008, his company released the Tesla Roadster, the first fully electric sports car. Since then, we’ve seen the Tesla Model S and Model X, both unique and exciting rides that are popping up on streets wherever moneyed influencers drive.

But right now, though, all the hype is around the Model 3. Tesla Motors has been tight-lipped regarding the new electric car. What we do know is that it should cost between $30,000 and $40,000, that it’ll go 200 miles on a single charge, and that it will be about 20 percent smaller than the Model S. Oh, and as the man says, it won’t look like other cars.

“I pretty much made that up. I have no idea.”