Santa Gets Circumcised in Turkey
By Elcin Poyrazlar

Santa Gets Circumcised in Turkey 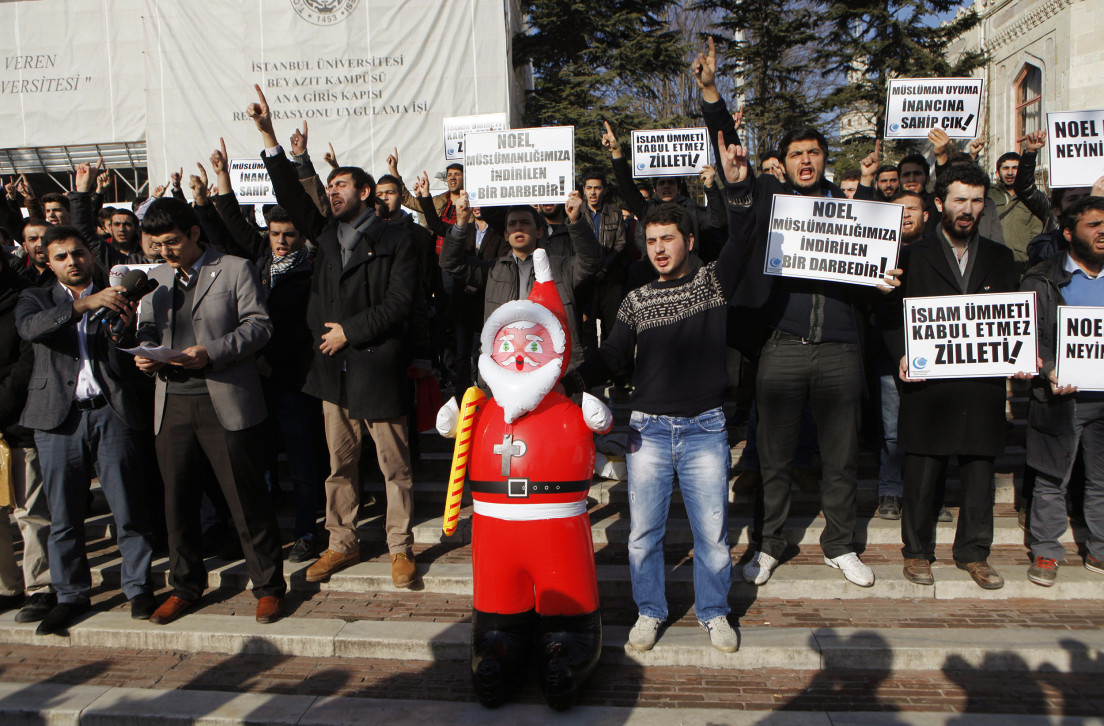 The year 2013 can’t end fast enough for Turkey.  Mass anti-government demonstrations in June, a jaw-dropping corruption scandal snaring some of the nation’s top officials, and now a brewing war against Christmas and New Year’s that has resulted in Santa getting an involuntary circumcision. OK, it was a blow-up Santa, but still. Ouch.

Fueling this season’s unfriendly greetings is a band of Muslim youths now voicing a more radical message amid the political turmoil in Turkey.

Just a day after Christmas, the Islamist whippersnappers took to the streets of Istanbul with an inflatable Santa Claus to protest against Christmas and New Year’s celebrations in Turkey. One of the protesters took a blade to the doll’s genital region and stabbed it multiple times. Prior to the knifing, demonstrators placed empty beer cans and a syringe in front of Santa, supposedly as a warning about the dangers of celebrating Christmas.

The demonstrators were reportedly members of the Anatolian Youth Association, a branch of an Islamist political party called the Felicity Party, although that group has denied any involvement in stabbing Santa. The same band of young radicals invited people to a protest last week featuring a poster depicting a Muslim man punching Santa in the face. The poster read “No to Christmas and New Year’s Celebrations.” The group plastered similar posters on billboards in the city, including one with a devious-looking Santa smoking weed. “Christmas is a blow to our Muslimhood,” was scrawled across the sign.

Santa, aka Saint Nicholas, was a Greek Christian bishop who called Turkey home in the fourth century.

The circumcision of Santa Claus was a huge topic on Twitter:

And hewas circumcized n stabbed in the21stcentury“@TurkEmbCairo: #SantaClaus was a real person and lived in the early 4thcentury in#Turkey."

Turkish vandals have stabbed Santa Claus. What a fucking idiot country we live in

I woke up feeling like I got stabbed by Santa Claus

The translation for this last one reads: “Santa, who first was circumcised and converted to Islam, was later stabbed by his Muslim brothers.”

“I don’t want to breathe the same air as those guys!! Santa Claus stabbed,” reads the above tweet. 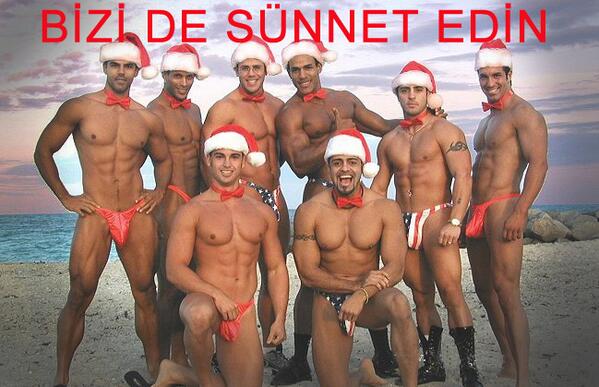 Apart from the tiny number of Christians in Turkey, people in the Muslim-majority country do not observe Christmas. However, celebrating the new year is a big deal, and it’s quite common for Turks to mark the occasion with a tree and gifts for loved ones. Although the extremist Islamic Great Eastern Raiders Front exploded a bomb in Istanbul’s central Taksim Square on Dec. 31, 2000, Islamist groups have generally kept their anger about New Year’s celebrations to themselves. But the attack on Father Christmas has increased their visibility once again.

“These are demonstrations by small militant Islamic groups—I don’t think this represents the majority of the Turkish population,” says Rober Koptaş, editor-in-chief of Agos, a weekly newspaper in Istanbul. But he agrees that the trend can be worrisome for Christians and other religious minorities living in the country.

“The act is tragicomical, and it is a show of violence. And I think it could be insulting for some people. Imagine what Muslims would do if the same act was done to an Islamic figure,” Koptaş says.

Even though a marginal Islamist group maimed Santa, xenophobia runs rampant within religious conservative circles in Turkey. In a large district on the Istanbul coast called Kadikoy, a sermon was posted on the facade of a mosque on Christmas Day advising Muslims to not be friends with Christians or Jews.