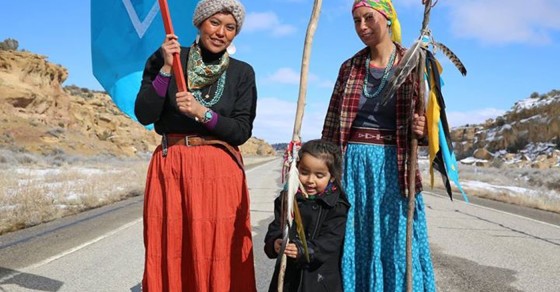 Since January, over 70 Navajo people have joined a prayer walk across the American Southwest protesting a fracking oil pipeline in New Mexico. The walk aims to galvanize Native American communities to demand more from oil companies that profit from the reservations’ natural resources.

The participants started with a crowdfunding campaign that raised almost $6,000 to support their year-long journey. Over the past few months, the Nihígáál Bee iina group has used digital media to share their spiritual traditions, connecting Navajo communities across the country.

They are chronicling their journey on a Facebook page: “Despite being at the forefront of energy extraction, our people do not see its benefits; approximately 25% of our people today live without electricity and running water on the Navajo Nation, while our economy functions at an unemployment rate of about 60%.”

The group calls this 1,000-mile protest their Journey for Existence, commemorating the 150th anniversary of “The Long Walk,” where thousands of Diné (Navajo people) were marched at gunpoint for hundreds of miles into Bosque Redondo, a concentration camp where they would stay for four years.