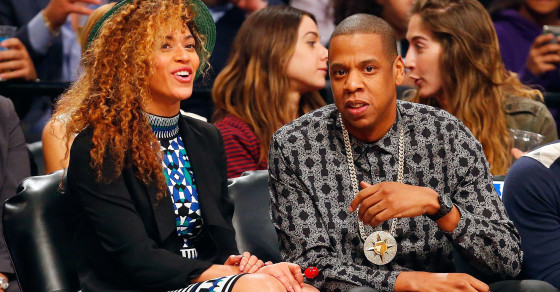 Why Did Islam Disappear From Hip-Hop?
By Adam K Raymond

Why Did Islam Disappear From Hip-Hop? 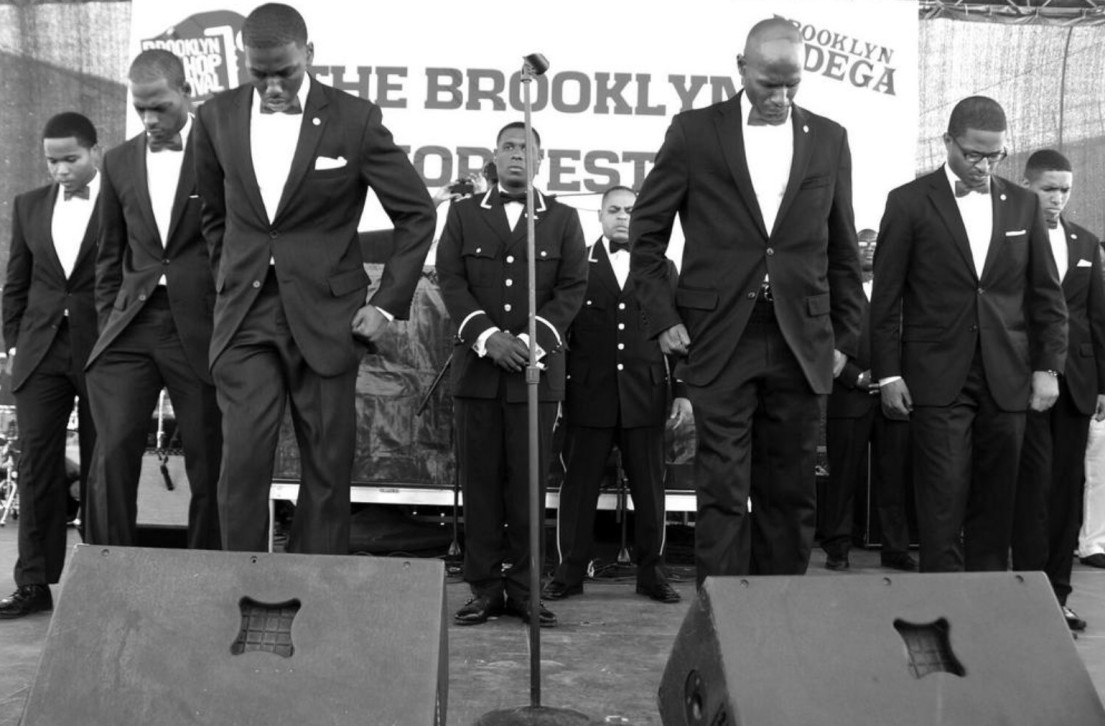 Back in July, reclusive Roc Nation rapper Jay Electronica emerged from self-imposed exile to the Brooklyn Hip-Hop Festival, playing a raucous, cameo-filled set that ended with his mentor Jay Z conferring a righteous honor upon him. Flanked by besuited members of the Nation of Islam’s Fruit of Islam wing, Jay Z removed a glistening Five Percent Nation medallion from his neck and placed it over the head of his enigmatic charge. For a fleeting moment, hip-hop appeared as it once did: powerful, black and Islamic.

That moment quickly passed. With rare exception, the Fruit of Islam, Jay Electronica’s Nation of Islam uniform and Jay Z’s Five Percent Nation necklace were not mentioned in the festival coverage that followed. That shouldn’t be a surprise. Once as common in rap videos as Timberlands, Nation of Islam imagery and broader Islamic references have all but disappeared from hip-hop in recent years. Often called “hip-hop’s unofficial religion,” Islam is now a negligible force in rap. What happened?

Jay Z performs with Jay Electronica at the Brooklyn Hip-Hop Festival, flanked by members of the Fruit of Islam.

To find the answer, let’s go back to 1998. Hip-hop was at a crossroads: firmly entrenched as a dominant commercial force but reeling from the deaths of its two biggest stars. There was a vacancy atop the rap game, and plenty of people were trying to fill it. Jay Z broke out in 1998 and landed his first number one album, DMX grunted his way to two number one albums, and Outkast released its twice-platinum masterpiece Aquemini. But for our purposes, 1998 was significant because it was the first year since hip-hop entered the mainstream that Islam fell out of favor. Replacing it? Christianity.

We know this thanks to Rap Stats, a tool from Genius.com that plots “the frequency of words appearing in rap songs from 1988 through the present day.” Here’s a chart showing that starting in 1990 (“the year that rap exploded,” according to Billboard editor Paul Grein), rappers’ use of the word “Muslim” rocketed past their use of the word “Christian.”

As you can see, the trend continues today, with the use of “Christian” at an all-time high and “Muslim” near its lowest ever. But those are just two words. Let’s dig deeper.

In the battle of God versus Allah, at least as it relates to hip-hop, God wins. Don’t focus on the frequency here—rappers have always used the word “God” more than “Allah”—but the trajectory. The use of “God,” which, granted, is a much more general term than “Allah,” is increasing, and in 2014 it’s being used in hip-hop more than ever. Conversely, the use of “Allah” is decreasing and at its lowest now, in 2014. The same is true for the holy books of Islam and Christianity. The word “bible” is being used more than ever, and the word “Quran” less than every year measured except 1988.

That’s not all. The use of “Islam” is near an all-time low, and “Mecca,” which spiked in the early ’90s, is barely used now. Same goes for “mosque.”

Meanwhile, rappers used the word “church” more this year than any other except 2010, and “amen” more than ever.

That leaves one last comparison: “Jesus” versus “Muhammad.” From 1988 to 1992, the pair of prophets were mentioned by rappers with nearly the same frequency. Today, the difference is greater than ever.

What’s behind the change in hip-hop’s religious preference? A change in the people making the music, for starters. The late ’80s and early ’90s were rife with Muslim rappers and others who identified with the Nation of Islam and the Five Percent Nation, two groups that are rooted in Islamic teachings though their members may not consider themselves Muslim. Even rappers outside those groups were using Islamic language that infiltrated mainstream hip-hop. In a paper outlining the relationship between hip-hop and Islam, University of Arkansas anthropologist Ted Swedenburg writes that many Five Percent Nation terms “such as ‘droppin’ science,’ ‘sup G?’ and ‘let me break it down for ya’ have achieved such common currency within the hip-hop community that they have lost their original resonance, at least for fans who know nothing of Islam in rap.”

The best known rappers affiliated with the Nation of Islam, the Five Percent Nation and more traditional Islam include Brand Nubian, Nas, Rakim, Gang Starr, Mobb Deep, Poor Righteous Teachers and several members of the Wu-Tang Clan. Many are still recording and performing in their 40s, but they don’t hold much relevance to hip-hop’s young fan base. Islamic and Islamic-sympathizing rappers are older, less prolific and, in the case of Ice Cube, too busy making bad family movies to preach the gospel of Muhammad or Farrakhan. In their place is a generation of rappers who grew up during a time when the influence of the Nation of Islam and Five Percent Nation was on the wane. They also grew up in a time when hip-hop wasn’t confined to the inner cities where those groups were strongest, meaning religious views in hip-hop have begun to better reflect those of America at large.

The generational and geographic shift explains much of hip-hop’s move away from Islam, but not all of it. It’s a safe bet 9/11 played its part, too. Unlike Gen-X rappers such as Mos Def, Q-Tip and Freeway, who converted to Islam in their teens and 20s, millennial rappers who weren’t born into the religion grew up in an era when Islam was regularly equated with evil. In the decade after 9/11, America’s views toward Islam plummeted. Meanwhile, devout Muslim rappers who came of age after 9/11 embraced “a more assertive Muslim identity,” Naeem Mohaiemen writes in his piece “Fear of a Muslim Planet: The Islamic Roots of Hip-Hop.” He continues, “Unlike the 5 Percenters’ fluid definitions, they adhere to a more traditional Islamic view and multiracial identity. In their lyrics, many of the concerns are about being Muslim in the West and the current civil liberties environment.” Mohaiemen names more than a dozen rappers he calls “Generation M,” and you haven’t heard of any of them.

It isn’t a surprise that explicit Islamic imagery would have a more difficult time breaking into the mainstream than the insidery Five Percent Nation language used by rappers like Method Man. A recent Zogby poll found American favorability of Muslim-Americans to be at a paltry 27 percent. Meanwhile, Christianity is viewed much more positively than Islam. Simply put, Jesus is a much easier sell than Muhammad.

For proof, look no further than the chest of your favorite rapper. Odds are the messiah is hanging in the form of a gaudy, diamond-encrusted pendant called a Jesus piece, first worn by Ghostface Killah in 1994—or at least that’s what he says. Biggie was the Jesus piece’s biggest fan until Kanye made the pendants really popular by releasing his own line in 2004. The Game gave the movement another push in 2012 when he named his album Jesus Piece and declared there was nothing wrong with smoking weed, going to strip clubs, eating fried chicken and still believing in God.

The Jesus piece has appeared on everyone over the past two years, from hipster-deity Tyler the Creator to radio staple J Cole; from old fat boring guy Rick Ross to the young skinny weirdos in Migos. Earlier this summer, Trill rapper Lil Boosie showed just how far hip-hop’s Jesus obsession has come when he was photographed wearing a piece that reportedly weighed 10 pounds and cost $200,000 dollars. Conspicuous consumption has never been so ironic.

So why has hip-hop been so pious lately? D.C.-based rapper Wale provided the simple answer in his Jesus piece-bashing song “Golden Salvation”: “Religion is a style, if not then why this shit a quarter mil?”