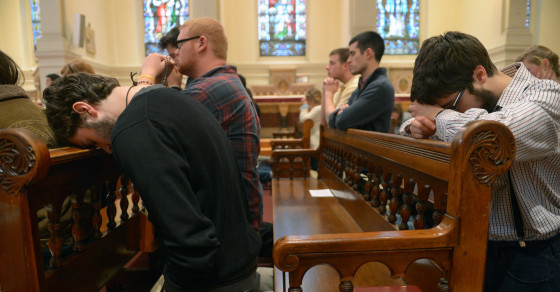 America’s Class of 2018 cares less about religious identity than any other group of college freshman in the last 40 years, newly released research shows.

An annual survey of college freshman found that students across the U.S. are continuing to distance themselves from religion in record numbers. “The American Freshman” study—which also tracks new students’ political leanings and attitudes, as well as their alcohol and tobacco use—shows that nearly 28 percent of those who began college in the fall of 2014 say they do not identify with any particular faith, bringing religious affiliation on campus to an all-time low.

In 1971, the first year that UCLA’s Higher Education Research Institute published its survey, 16 percent of freshmen said they did not subscribe to a particular religion. This year’s study included responses from 153,000 freshman at 227 schools nationwide.

Religious universities are by no means immune from this downward trend, the study found. Almost 15 percent of freshmen now attending Catholic colleges did not identify with any religion, up from just 10.6 percent a decade ago. Over the last 10 years, those who have no religious preference at other faith-based universities nearly doubled, from 9.3 percent to 17.4 percent.