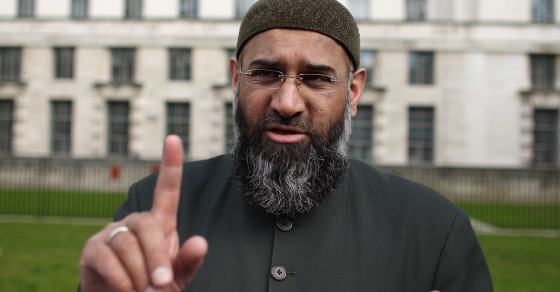 Not long after masked gunmen stormed the offices of a French satirical newspaper in Paris, killing a dozen people, Anjem Choudary, a prominent activist and arguably Britain’s leading propagandist for ISIS, began to tweet his support for the attacks.

Freedom of expression does not extend to insulting the Prophets of Allah, whatever your views on the events in Paris today! #ParisShooting

If freedom of expression can be sacrificed for criminalising incitement & hatred, Why not for insulting the Prophet of Allah? #ParisShooting

The paper, called Charlie Hebdo, ran a cover that featured a caricature of novelist Michel Houellebecq, who has written a novel that imagines a France led by Muslims.

Counterterrorism officials say Choudary has helped indoctrinate hordes of homegrown terrorists and prompted thousands of Europeans to head for the war zones of Iraq and Syria. He’s also linked to numerous terrorist attacks in the United Kingdom.

On the bright side, there are mainstream imams who are speaking out against the attacks in Paris. Mufti Ismail Menk, for instance, has over a million followers on Facebook and is a powerful influencer.

There is also Omar Suleiman, who has over half a million Facebook followers.

Both men are important counterweights to the message Choudary is spreading.

Correction: In an earlier version of this story, Vocativ wrongly identified Anjem Choudary as an “imam.” We apologize for the mistake.