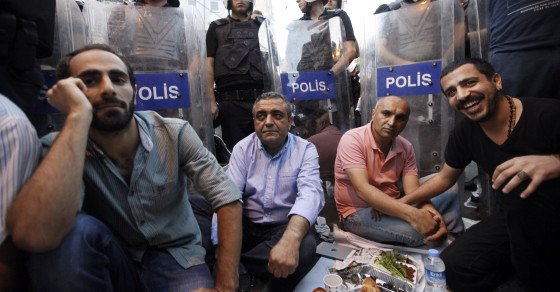 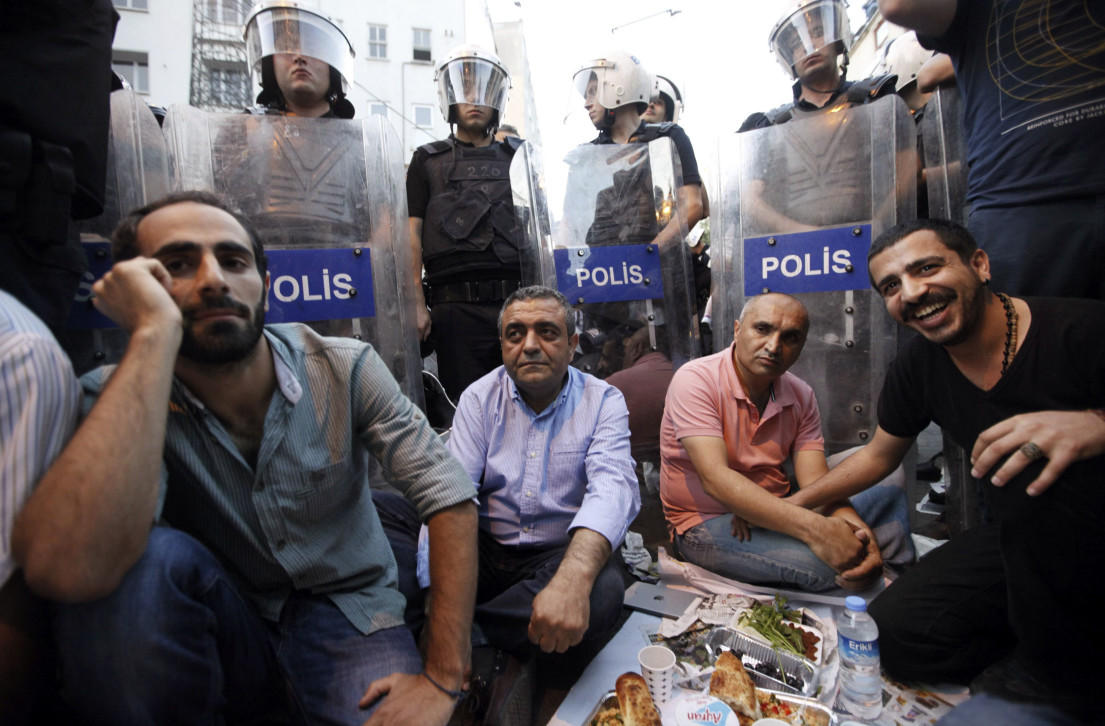 That’s what atheists in strictly adherent Muslim countries do to conceal their beliefs, or lack thereof, and guarantee their own safety. Threats of arrest or punishment for blasphemy force non-believers to give the impression that they’re fasting just as hard as all those around them, or in some cases, to totally adopt the Ramadan fast for fear of being found out and persecuted. The situation is nearly impossible to bear, argue a growing number of atheists in the Muslim world.

People prepare to break their fast on the first day of the holy month of Ramadan in front of police officers .

Ramadan–a holy month in Islam–prohibits eating, drinking, sex and other pleasures from dusk till dawn for a period of 30 days. The ritual is marked by the world’s 1.6 billion Muslims, and the fast is broken at sundown with large communal feasts during the holy month.

But in the Middle East and elsewhere in the Muslim world, going against the grain, renouncing God and declaring oneself openly atheist can have very grave consequences. And it’s never more obvious than during Ramadan.

While a person can abstain from taking part in prayers or certain rituals without drawing unwanted attention, declaring oneself an all-out non-believer during Ramadan is as simple as grabbing an iced coffee. Such a basic act can mean alienating family and friends at best, and attract harsh punishment in the worst cases–including threats of execution from state authorities.

Vocativ identified two influential members of the online atheist community in the Middle East. In an exclusive interview with a vocal but anonymous atheist based in Jeddah, Saudi Arabia (tweeting as @mol7d_Arabi), the interviewee told Vocativ of his fear of being found out by the authorities for refusing to observe the Ramadan fast.

“The constant threat of being caught not fasting, which carries severe punishment of lashings and up to a year in prison, makes one vigilant and worried. Ramadan is like Christmas but you are forced to go to Mass and say your prayers, by law”.

Kashmiri Muslims perform prayers inside the shrine of Sufi Saint Khawaja Naqashband during the holy month of Ramadan.

He adds that while Ramadan “as a cultural event is somewhat pleasant–there is a great feeling of festivity with family gatherings and lots of food, after sunset of course–the negative aspect [for atheists] is the enforcement of fasting and the feeling of self-loathing of having to perform religious rituals when one utterly does not believe in them”.

“I feel stifled, religion is the only way of life here. It controls every aspect of society. From the laws to the behavior of people, to the way people see and evaluate morality, culture and relationships”, he says.

“You have to be careful of every word you will say and every action with anybody”, says another atheist activist based in one of the Gulf States who runs the popular “Arab Atheists Broadcasting Center” website, which produces pro-atheism YouTube clips.

Asking to be referred to by the alias of “John Silver”, another man says he secretly rebels against the fast.

“I stay at work without food but every now and then I go to the bathroom to drink water, and when I’m going in the morning to work I go to a hidden place in the car and take a small sandwich.”

A man drinks water as he breaks his fast by the river Buriganga during the holy month of Ramadan.

Should he ever be found out, the consequences would likely be harsh.

“I will lose my job and maybe they will arrest me and put me in jail or they will throw me out of the country. I’m originally from Syria”, says Silver.

Furious and frustrated, these activists are joined by many others who are defying conventions and legislation by taking a more public stance online–a trend which began to emerge in mid-2000s and has since been boosted by the Arab Spring which began in 2011.

Through organisations like Arab Atheist Broadcasting and groups of youtube channels, Arab atheists gather online to translate relevant books (like Richard Dawkins’ The God Delusion) and documentaries into Arabic. The feelings they have stretch far beyond an animosity towards the enforced hunger of Ramadan.

“I feel it is my humanistic duty to inform, educate and breakdown the myths and superstitions of religion and the damage they cause our societies”, adds the anonymous Jeddah-based activist.

In at least seven nations–including Afghanistan, Iran, Pakistan, Sudan, the Maldives, Mauritania and Saudi Arabia–an atheist can be charged with the death penalty for his or her lack of beliefs, notes a 2012 study by the International Humanist and Ethical Union (IHEU), though no such cases have recently come to light.

Earlier this year, Saudi Arabia issued a new series of laws that declared being an atheist akin to being a terrorist.

Elsewhere, in countries including Egypt, Jordan, Indonesia, Bangladesh and Kuwait, declaring or promoting atheist views is restricted or completely prohibited by laws which define this as “blasphemy”, the same report notes.