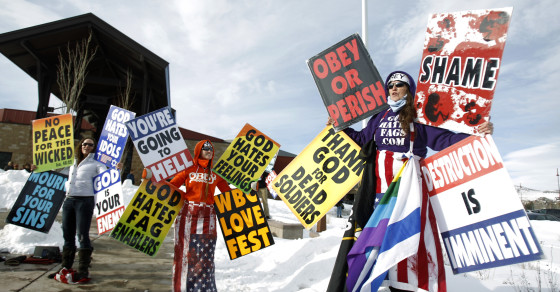 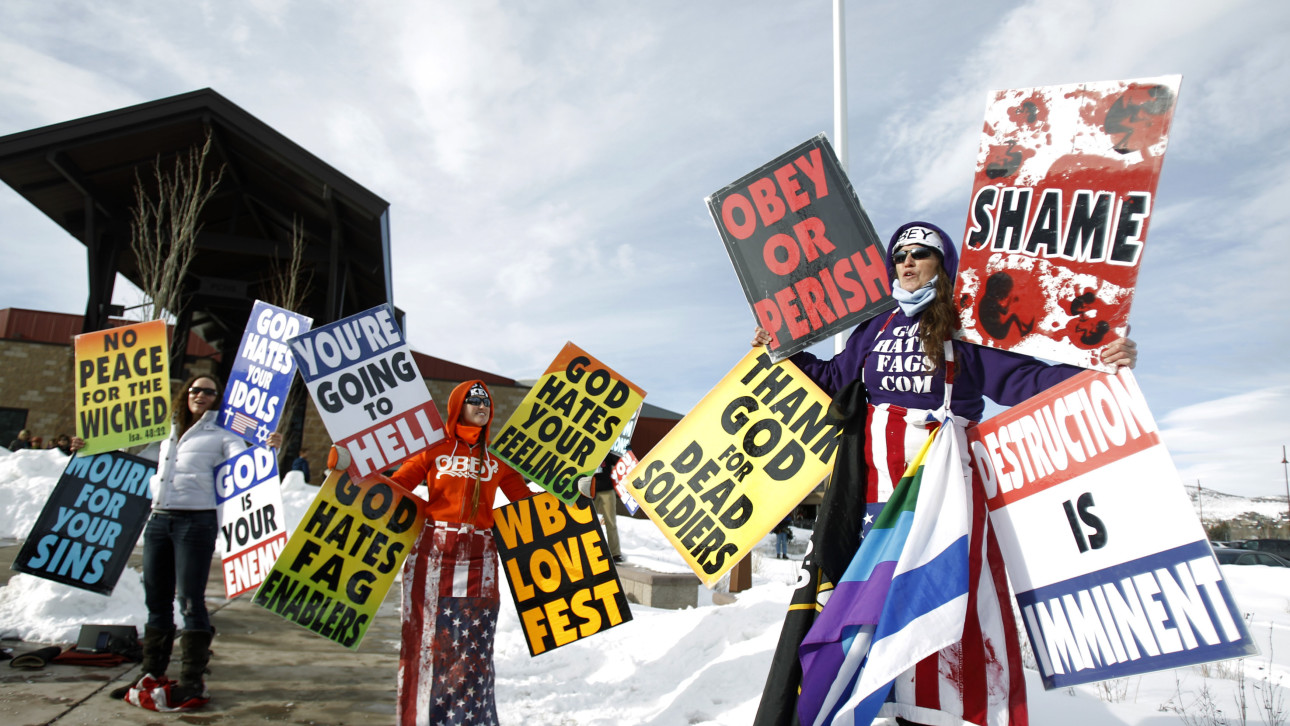 Reports that Rev. Fred Phelps Sr., the de facto leader of the fanatical Westboro Baptist Church, is on his deathbed mean one of two things for the rabidly anti-gay sect: His passing will mark the group’s decline into obscurity or result in a power void ready to be filled by an eager follower.

Phelps’ estranged son Nate, who was the first to ready the death knell by acknowledging his father’s failing health on Facebook, believes it’ll be the latter. “Originally, my thought was he’s the engine that powers it, it’s his drive that keeps the message and the effort alive. So I said early on it can’t continue to exist,” he told the Topeka Capital-Journal, adding that recent interactions with church members have led to a change of opinion. “The rhetoric and the intensity is there in several of them that matches my father or is close to it.”

The church first courted international attention following the gay hate-crime murder of Matthew Shepard in 1998, picketing his funeral with signs that read “Matt in Hell” and “AIDS cures fags.” They further made a name for themselves by demonstrating at the services of fallen U.S. soldiers, 9/11 memorials, and a botched attempt at the funeral of a child killed during the Sandy Hook Elementary School shootings; upcoming pickets, however, tend toward celebrity with planned rallies outside Miley Cyrus, Lorde and Kathy Griffin concerts.

Church spokesperson Steve Drain has confirmed that Phelps Sr. is at a care facility, believed to be Midland Hospice house in Topeka, Kansas, but would not verify the severity of his condition. However, Drain’s daughter Lauren, author of Banished: Surviving My Years in the Westboro Baptist Church, responded to our request for an interview with a tacit acknowledgment that his death is imminent. “Given the current circumstances around Fred Phelp’s health,” she writes. “I do not think it is appropriate to take any interview requests while a man, any man, is on his deathbed.”

The demise of their most prominent member poses two main problems for the group. The first hinges on the belief that, as their colorful signs suggest, death is a judgment from God. As a result, they believe they are impervious to death and that Jesus will return to save them; a small problem now that time is running out on their most senior member. Rumors have surfaced that Phelps was excommunicated last year and replaced by a board of all-male elders, creating a convenient loophole for what would otherwise be a substantial ideological hurdle.

The second, and perhaps more pressing, concern is what will happen to the church when he dies. Punching above their weight in terms of visibility versus numbers, membership estimates range between 15 and 40, with ranks almost exclusively comprised of the extended Phelps and Drain families. Prior to the reported formation of the eight-strong board, the personality-driven sect thrived under the reign of the vitriolic Phelps, its bigoted public face. Does the death of their leader spell the end for the reviled group, or is there an heir ready to seize control?

We take a look at the most likely candidates for America’s next top bigot.

Jonathan Phelps 10:1
The seventh of Fred Sr.’s 13 children, and one of three remaining sons who haven’t defected or been banished from the church, Jonathan is a contender because of gender alone—the family is staunchly patriarchal. However, he remains an outlier because of the fact that he briefly left the church in the late ’80s when his wife refused to grant him joint custody of their son following a divorce. He is now back in the fold, but is said to be regarded with distrust for once turning his back on the family.

Fred Phelps Jr. 8:1
The oldest of the Phelps spawn, Fred Jr. has flown largely under the radar compared to his more outspoken siblings. Again gender places him in contention, and his seniority and commitment to the church put him in good standing. He has remained steadfast in his faith, despite the fact that his daughter Libby and son Timmy both left, the former becoming an outspoken advocate for gay rights.

Steve Drain 5:1
The spokesperson of the group and the man responsible for forging a connection between the Phelpses and Drains, Steve has spent much of his adult life preaching the church’s message of intolerance. Though he is likely to make a grab for power, the fact that he is not a Phelps and thus an outsider is a major obstacle. “I don’t think it’ll ever happen, I don’t think they’ll follow him,” says Lisa Pulitzer, co-author of Lauren Drain’s book.

Shirley Phelps-Roper 5:1
If she were a man Shirley would be a lock to take control of Westboro. Aside from her father, Fred Sr.’s fifth child is the group’s most public face—regularly appearing on TV and radio to defend their position. Even though she is a woman, and therefore subjugated by the family’s men, she knows how to play the media, which could be enough to overcome her handicap. On the other hand, it’s worth noting that she has receded from the spotlight lately following the defection of her daughters, Megan and Grace.

Timothy Phelps 2:1
Timothy, the family’s youngest son, has been quietly taking a position of prominence in recent years. His willingness to speak to left-leaning outlets in the past signals his readiness to usher in a comparatively less confrontational era for the church, strengthening the possibility that it will survive Fred Sr.’s death. His older brother Nate says that Timothy has “shown the fire” and is most likely to take the top spot going forward.