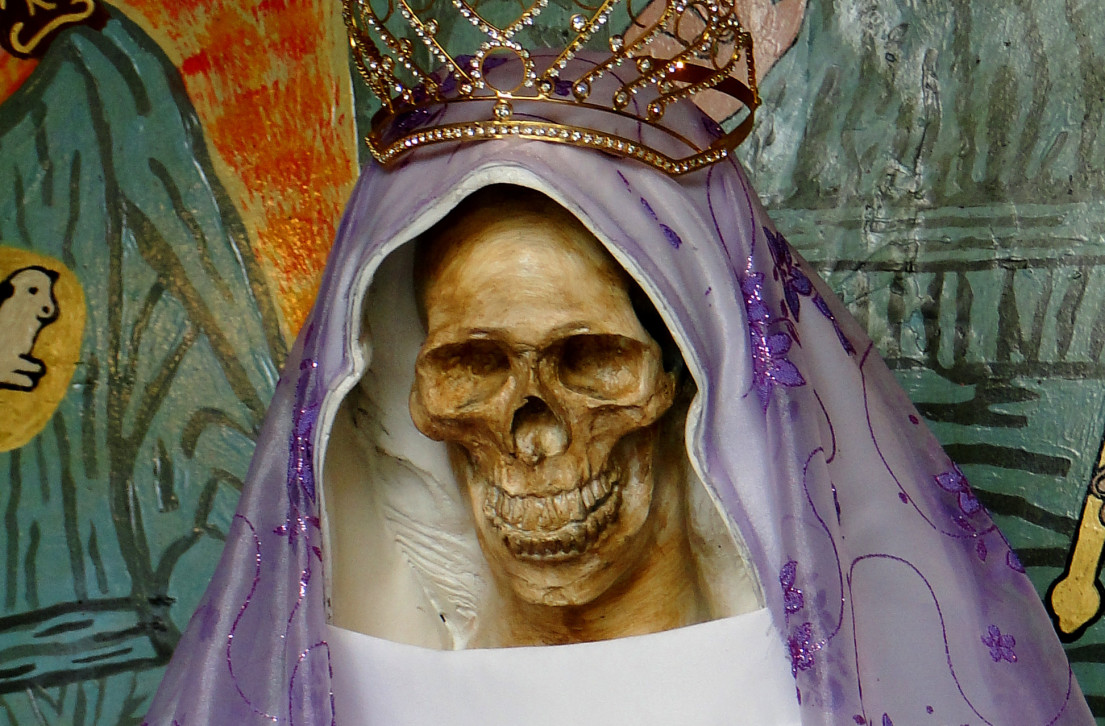 MEXICO CITY—The woman and her daughter approach the glass in silence. They light a cigarette and place it next to a candle. The girl rings a bell. They kneel softly, close their eyes and whisper. The space around them becomes quiet, almost eerie. “Holiest death,” the mother mumbles, “give my family strength and prosperity.” A tear rolls down her cheek. Behind the glass, a skeletal statue in a white wedding dress stares back, grinning.

Though traditional Roman Catholicism is still by far the dominant religion in Mexico, the Santa Muerte is the fastest growing belief system in the country. It boasts between 5 million and 10 million followers, and even more if you count Mexican immigrants in the United States. The Santa Muerte has become so popular that Holy Death paraphernalia now outsell those of the Virgin of Guadalupe, Mexico’s traditional Catholic patron saint.

But not everyone is happy about the rise of Holy Death. Even though most followers see themselves as Catholics, the Santa Muerte is a controversial figure. The Catholic Church condemns belief in her as a Satanic cult, a morbid personalization of how values have declined in country plagued by brutal drug-related violence.

“The cult of the Holy Death is destructive,” said father Hugo Valdemar, spokesman for the archdiocese of Mexico City, in an interview earlier this year. “It is blasphemous, it is diabolical and obviously it is anticultural.”

The origins of the Santa Muerte can be traced back to Mictlantecuhtli, the Aztec lord of the underworld, and the Christian depictions of the Angel of Death.

To her worshippers, the Santa Muerte has become the personification of Good Death, a protector of sorts who grants favors to whoever shows devotion and brings gifts such as tequila and water (being a skeleton, she suffers from an unquenchable thirst).

The shrine in Tepito, considered the principal sanctuary of Holy Death, was founded 12 years ago by Enriqueta Romero, a kind, elderly woman who is always dressed in an apron and never wanders far from the sanctuary. “Holy Death is our savior, our light. It’s very difficult to explain what she means to us,” she says. “She protects those no one else will protect.”

Not everyone is happy about all this protection. In recent years, Catholic priests claim that exorcisms are sharply on the rise in Mexico due to the “satanic” cult of Santa Muerte. Officially sanctioned exorcists complain they can barely handle the number of demonic possessions. Several years ago in Soriano, a town just north of Mexico City, local priests even inaugurated a chapel specifically aimed at banishing dark forces.

Accusing Holy Death of being satanic may be an exaggeration (Romero’s shrine and others are completely devoid of any references to devil). There is, however, a certain link between Mexico’s violent drug cartels and Holy Death. Altars devoted to her have frequently been found in the houses of drug smugglers and hit men, who pray to her for success. Not being an official religion (the Mexican government prohibited Holy Death churches from being consecrated in 2005), the cult of the Santa Muerte has no official moral guidelines. Apparently she does not discriminate against anyone who shows devotion.

That can’t be said for the Catholic Church, says Romero: “The Catholic Church has lost touch with its followers. The average Mexican does not feel the church is acting in his best interests, and then there are the scandals of child abuse. Holy Death fills a spiritual void. She listens to us and she truly loves us. That’s why more and more people ask her for help.”