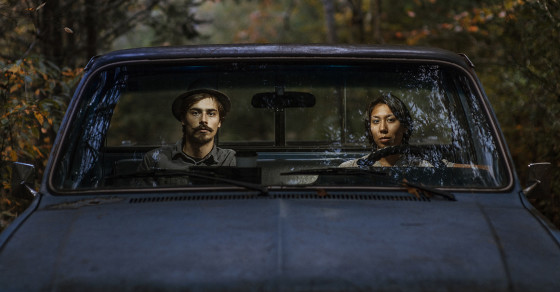 Primitivism: A Modern Take on Taking an Axe to Modernity
By Mike Belleme

Primitivism: A Modern Take on Taking an Axe to Modernity 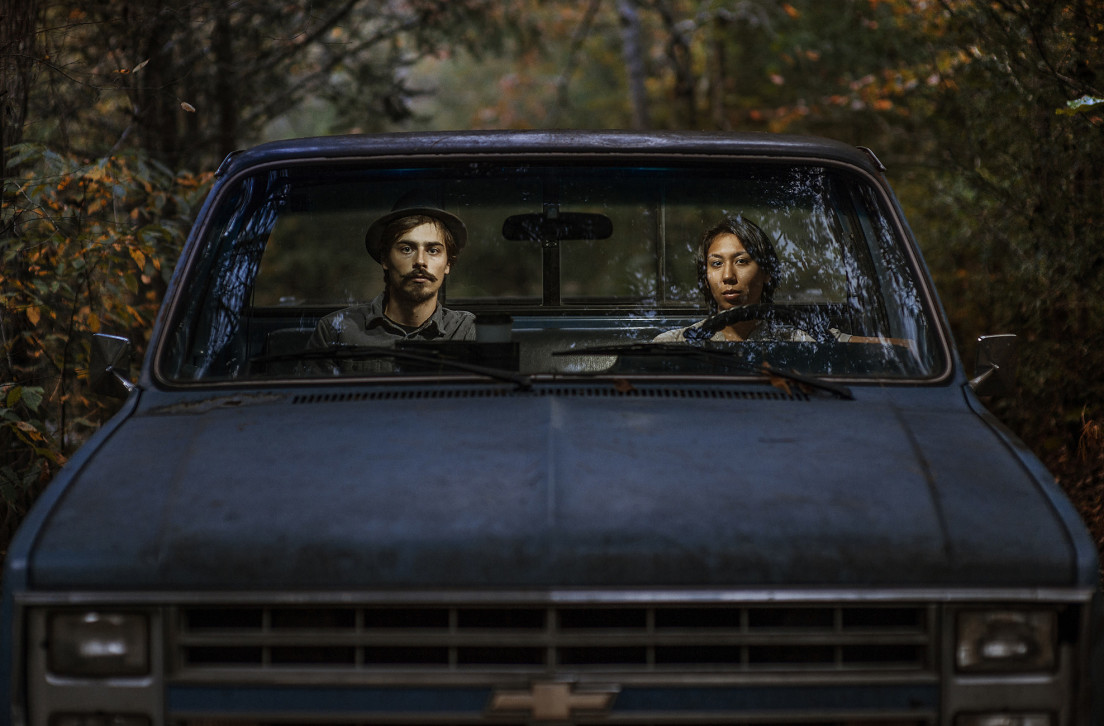 I write to you from a world that would seem very foreign to the vast majority of people in our country. My home, the treehouse, is nestled deep in the woods in the mountains of western North Carolina, and is accessed by a long, winding trail along the river.

For the past two years, I’ve been living a rustic lifestyle. We cut, chop and stockpile enough firewood to heat us for the entire winter. I’ve learned the ins and outs of a composting toilet, and I grow my own food, all while maintaining a career in the fast-paced world of editorial photography.

A self-portrait of my girlfriend, Kristen Molina Nauert, and I in the truck that we got for hauling firewood and other tasks.

These seemingly incongruous lifestyles converged through a sequence of story leads, some amazing mentors, and a newfound longing to create some distance from the hyper-connected, progress-obsessed society that we live in.

Misha pulls a full bag of bagels from a dumpster at Bruegger's Bagels in Asheville, North Carolina. Wildroots members can easily fill the entire truck bed with the food they find in an afternoon's dumpster-diving.

About five years ago, while working on a project called “One Man’s Trash,” which focused on people who were finding uses for discarded objects and food, I heard about a primitivist community living in the woods. I figured out where it was, and soon I began my journey into the world of primitivism and my new project about Wildroots.

Members of the Wildroots community gather in 2010 for breakfast in the Bark Lodge. At Wildroots there are no rules, per se, but lots of understandings. We all gather at the same time for meals so the fire doesn't have to burn for too long. No one is officially in charge, but Tod, seen here at center, is considered a leader.

This group of people have, for various reasons, chosen not to be members of modern society. They live in small wattle-and-daub huts nestled on hillsides in the woods, with no electricity, lighters or other modern conveniences.

A wattle-and-daub house built by Tod at Wildroots in 2011 for him and his partner, Talia. Tod is now considering starting over on his house because of water drainage issues.

I knew right away that the photographer-subject dynamic was going to be very different at Wildroots than it had been anywhere else I’d photographed. For starters, the camera itself was so painfully out of place and intrusive because it represented the very thing they were trying to escape. Each click of the shutter felt like I was dishonoring the serenity of this beautiful place. They allowed me to shoot there, despite the discomfort that it caused, because they wanted others to know that this lifestyle is possible.

John Krause, center, works with members of the Wildroots community to make cider at his home in Marshal, North Carolina, with a cider press that he made with a friend. Krause offers a cut of cider to anyone who brings apples to press and has a system for divvying it up. About 50 gallons was produced on this day in 2013.

The social dynamic in a communal living space like Wildroots is such that your worth as a member of the community is determined by the ratio of resourses used to resourses produced or harvested. For me to gain the trust of this community while living off of their resources for weeks at a time, I had to spend a whole lot more time working to provide for the community than shooting.

A member of the Wildroots community skins a roadkill raccoon. The pelt and meat were used. This was the first thing I saw walking up the driveway to Wildroots on my first visit, and the first photo I shot at Wildroots in 2010.

In my first 10-day stay at Wildroots, I shot about as much as I normally would in a one-hour shoot. I did, however, learn how to use a cross-cut saw, how to differentiate between several kinds of wood and trees, how to make repairs on a wattle-and-daub house, how to hand-hew boards to make a bed, how to identify edible wild plants and how to build a saw horse using only a hand drill and a knife (just to name a few). In my time between visits to Wildroots, I became more and more interested in applying these new skills in my daily life.

Rachel looks into the fire during dinner, the most social time at Wildroots. It usually follows a long, hard day of working on the land or cutting firewood, and songs and conversations around the fire are a nice way to end the day.

As a kid, I spent every day tromping through the woods and learning from nature. The experience at Wildroots reawakened something in me that yearned for that connection again. I started hearing about other people living this way and gatherings where people from all over the country were coming to share skills and knowledge.

Dancers move around the fire during a drum circle on the opening night of Firefly 2011 near Asheville, North Carolina.

This led me to the Firefly Gathering, held here in western North Carolina. The first time I went it was on assignment for a magazine, but I go back every year, and each time I go I spend more time seeking out new knowledge of homesteading and the natural world instead of shooting.

Natalie Bogwalker is the co-founder of Firefly Gathering and founder of her own earth skills school called Wild Abundance, which takes place on her land. Before starting Firefly, she lived at Wildroots for several years and built her own wattle-and-daub house. Here she wears a buckskin dress that she made.

Many of the teachers at Firefly live in the area, and I am able to spend time with them throughout the year and visit their amazing homesteads. The main organizer of Firefly, Natalie Bogwalker, used to live at Wildroots and now resides in a homesteading community about 10 minutes from my house.

A couple of years ago, my girlfriend and I were searching for a house to rent that was a bit outside of the city so we could start a shift toward this homesteading lifestyle. What we found was not what we expected, but too good to turn down. Living in the treehouse meant a lot of adjustments and the loss of some very basic comforts that most people take for granted, but that was a very welcome change for us.

A fisherman removes a hook from a small fish on the lake during Firefly Gathering in 2011.

All of the sudden, being warm didn’t mean switching on a dial, it meant planning ahead. It entailed getting a chainsaw, cutting wood, splitting it, knowing what wood was best for burning and finding a system for hauling wood to the house without any road access. Wildroots and Firefly had prepared me for this and other challenges, and I still take great joy in household projects and problem-solving.

Doug Elliot, a teacher at Firefly Gathering, poses for a portrait in his garden at his rural homestead in Rutherfordton, North Carolina. Doug is one of the most knowledgable naturalists in the country and is the author of several books ranging from plant identification to folklore to children's stories.

We do have electricity and Internet, albeit very slow Internet, so I am able to stay connected with clients and easily run out on a moment’s notice for a shoot. I try to find a good balance that works for me in terms of staying professional and on point with client relations, while holding steadfast to the ideals and quality of life that I need to be happy.

Todd Elliot, center, waltzes with a partner at the 2011 Firefly Gathering.

It’s a difficult thing to explain why I think this information and shift in lifestyle is valuable. It’s not very relevant or applicable in the world and times that we live in. I think the biggest part for me is understanding things in a holistic sense. For example, the tree that I live in is a tulip poplar. I’ve carved spoons out of tulip poplar and know its soft texture and how the color of the wood changes as it seasons. I’ve burned it in my fire, and know that it catches very fast and burns well, but gives off little heat.

A couple listens to a Raising Appalachia concert as the moon rises during the Firefly Gathering on the last night of the festival in 2013.

I can recognize it by smell alone, or out of the corner of my eye from a distance or just by the sound a small branch makes if you snap it in your hand. I feel a deep understanding and appreciation for the tree, and even though that knowledge can’t be monetized and means nothing to most people, to me it means enough to have to drive 20 minutes every day to get into town, and to work for my heating in the winter. To me that knowledge is worth having to shovel my own shit out of my composting toilet.