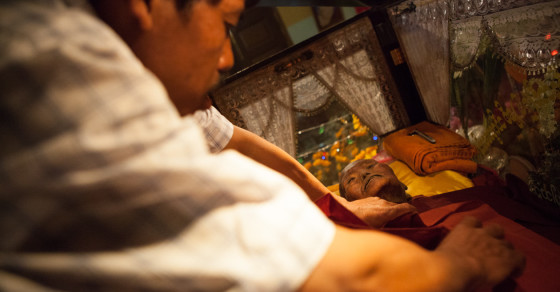 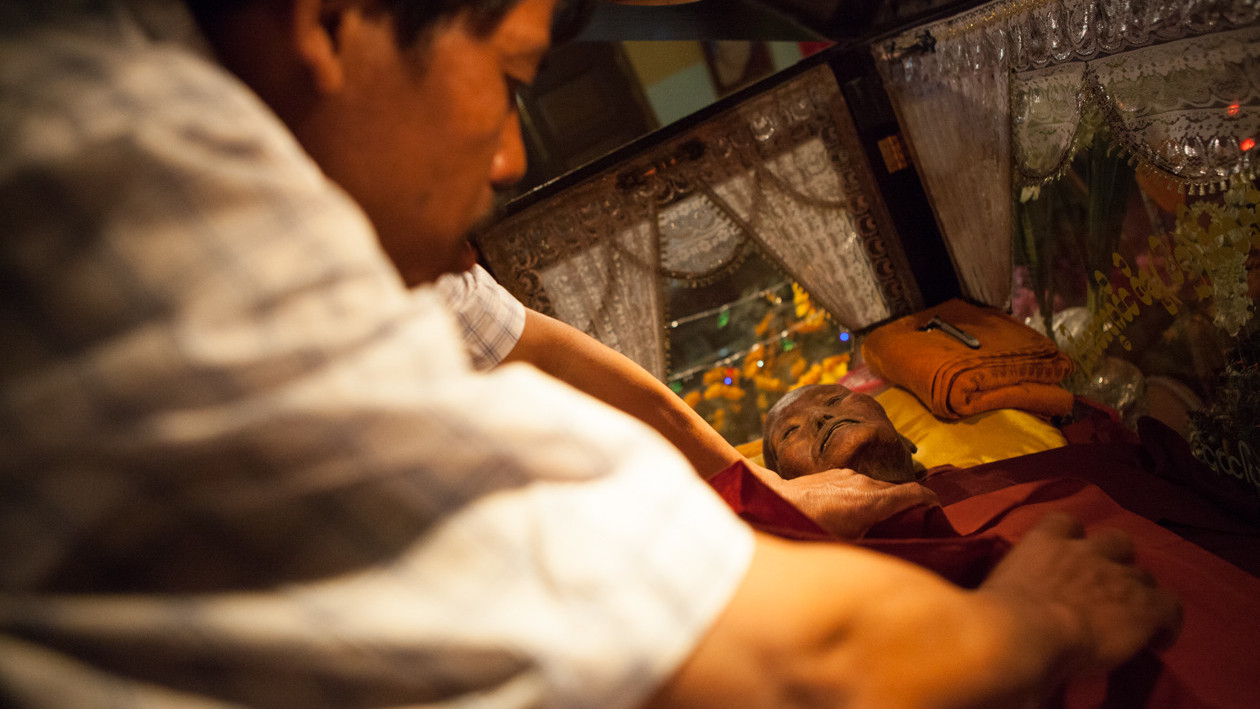 Before U Thay Zinaya passed away in 2004 at the age of 96, he made a peculiar request to his fellow monks: Instead of cremation, he wanted his body put on display.

One of the caretakers at Kone Lone Monastery helps change the robes on U Thay Zinaya’s body.
(Vocativ/Arthur Nazaryan)

The idea was that his followers would be reminded of their mortality and would be inspired to commit good deeds. His wish has been fulfilled, and his body is on display in a glass case in his native Kone Lone monastery in Burma.

Visitors kneel and pray before the body of U Thay Zinaya.
(Vocativ/Arthur Nazaryan)

Now busloads of Burmese tourists and religious pilgrims make their way down dusty dirt roads, through the rolling hills of northern Burma’s Shan state, to the monastery to see the monk, formally known as Kone Lone Saya Daw.

They pray, leave soy milk, fruit, money and other offerings, and snap pictures of the body, but Thay Zinaya is famous throughout the country for one simple fact: 10 years after his death, his body has hardly decayed.

A man holds his child outside the special building that was erected to house the body of U Thay Zinaya.
(Vocativ/Arthur Nazaryan)

The glass case in which he rests is opened extremely rarely—to change his robes, for example; U Kaw Wi Da, the head monk of Kone Lone Monastery, says the monk’s hair and fingernails are never trimmed.

U Kaw Wi Da, the head monk of Kone Lone monastery, sits in a chair nearby a wax sculpture of U Thay Zinaya.
(Vocativ/Arthur Nazaryan)

According to U Kaw Wi Da, who knew the monk when he was alive, it was his “loving heart” and remarkable devotion to Buddhist meditation that lent Thay Zinaya miraculous properties both in life and after death.

Inside Aung Mingalar cave, where U Thay Zinaya used to meditate for hours at a time.
(Vocativ/Arthur Nazaryan)

Thay Zinaya first joined the monkhood at age 12, and stayed with it for the rest of his life. By the time he was 45, he was a vegetarian who preferred solitude, says U Kaw Wi Da. He would often meditate in nearby Aung Mingalar cave, sometimes for 24 hours straight.

On occasion, he says, worshippers would see the vague image of a Buddhist Stuppah in the palm of his hands. Those who touched their head to his feet during worship reported a pleasant fragrance emanating from them.

A view from the cave-temple complex of Aung Mingalar, where a small handful of monks and nuns live.
(Vocativ/Arthur Nazaryan)

Thay Zinaya isn’t alone: There are a number of Buddhist monk bodies on display in Burma that are allegedly resistant to decay. Russia has one, too—his name is Dashi-Dorzho Itigilov. And it’s not just the Buddhists, of course. The Catholics have dozens of “incorruptible” saints throughout Europe.