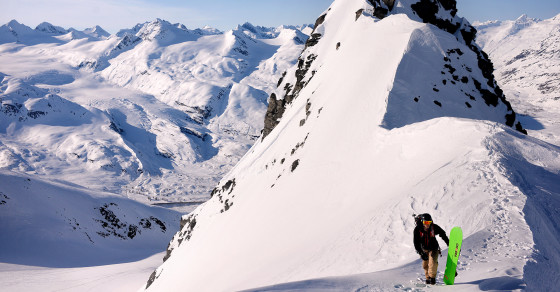 Chasing Powder: A Winter on the Road
By James Roh

Chasing Powder: A Winter on the Road 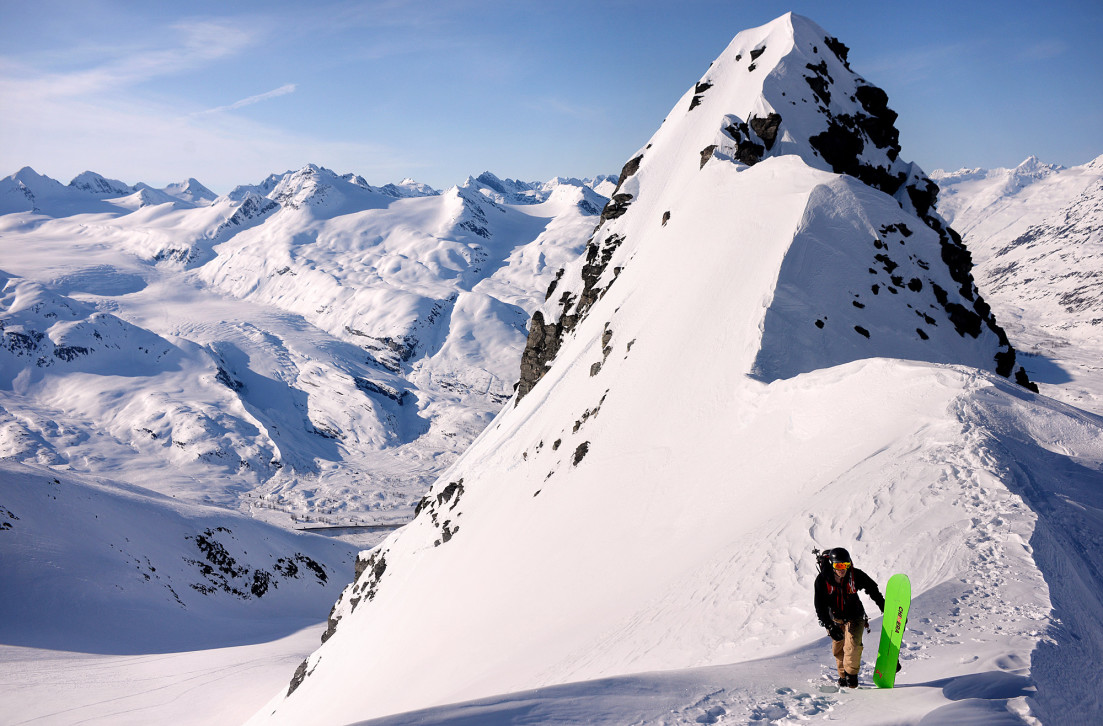 The mountains were caked in powder and bathed in a thick white fog. Visibility was basically nil, like having half ping-pong balls glued over your eyes. The forecast said it would burn off by the afternoon, but then again, in this part of Alaska, the mountains are rocky folds 7,000 feet above sea level, which creates a weather pattern with a mind of its own.

We stuffed granola bars into our packs and topped off our water bottles in preparation for the long day. Today’s mission was a series of steep north-facing ramps called “The Berlin Wall,” accessible by Thompson Pass near the small port town of Valdez, Alaska. A recent storm had deposited a fresh blanket of snow and conditions were borderline perfect. Five hours of climbing later, the sun had poked through and it was now time to drop.

Joey Howell slashes the snow during a tour on Teton Pass outside of Jackson, Wyoming, on Jan. 15. A storm dropped close to 4 feet of snow in a matter of days, offering up great riding conditions but dangerously high avalanche conditions.

Opting to go first, I let gravity do its thing. When I reached the glacier at the bottom of the wall, I knew I had just ridden the best run of my life. My partners followed, equally ecstatic. A barrage of fist bumps, hollers and rhetorical exclamations followed.

Celebrating a day of powder skiing at Whitewater Resort near Nelson, British Columbia, on Feb. 12, 2014. A storm pounded the area for two weeks straight, elevating avalanche risk. Roh and Howell splurged on a lift ticket to safely enjoy the new snow.

Back in the parking lot, we sipped on celebratory beers and smiled. Days like today were what validated my decision to take a step into the unknown in search of an idealistic lifestyle.

Joey Howell, left, and Harald Vedo Tveit, center, enjoy a camp fire with French skiers in Whitewater Resort, British Columbia, on Feb. 17—just some of the skiers and snowboarders they met while living in the resort's parking lot.

In September of 2012, my good friend Joey and I formed a vague plan to take a winter off from reality to dedicate ourselves to traveling, exploring the mountains, and riding our snowboards. This would include putting relationships on hold, stuffing our possessions in a friend’s basement, and perhaps the most daunting of all, quitting our jobs. Joey was a graphic designer for a firm in Salt Lake City, and I was a staff photographer for the Daily Herald newspaper in Provo.

James Roh and Joey Howell head north via the Stewart Cassiar Highway in the Yukon. The two spent the winter traveling north from Utah to Alaska, snowboarding different mountains along the way.

By January 2014, we had somehow pulled it all together and were on our way. We left our home of Salt Lake City in a fixed-up truck camper filled with snowboards, mountaineering equipment, and cameras, leaving little room for nonessentials.

Joey Howell, left, and Spenser Heaps make their way onto the Mint Glacier in the Talkeetna Mountains of Alaska on April 16.  This glacier was just one of several the group traveled on while completing the five-day hut-to-hut Bomber Traverse.

Our end goal was Alaska—the mecca of big-mountain snowboarding—but not without stopping in mountain towns throughout North America to sample the goods each area had to offer.

Joey Howell skinny-dips in a hot spring near the Yukon border on March 15. Howell and James Roh broke up the week-long drive north through Canada with a soak in the natural springs.

Along the way, we have partied with Scandinavian ski bums, skinny-dipped in an isolated hot spring near the Yukon border, played intense games of Bananagrams with new friends deep in the wilderness, ridden four to a snowmobile, drank straight from a glacier stream, gotten lost in a thick old growth forest in Montana, blasted shotguns with drunk Canadians, listened to sea otters munch on clams, stumbled through the streets of Seattle, and parked our mobile mansion in so many random locations it’s hard to recall them all.

Spenser Heaps, left, and Joey Howell, center, share a laugh with hut mates at the Snowbird Hut during the last night of the Bomber Traverse in the Talkeetna Mountains of Alaska on April 18.

But it hasn’t all been just high-fives and long powder runs. Our seemingly simplistic lifestyle has thrown us so many curve balls that last week’s $825 visit to the mechanic hardly surprised us.

Joey Howell digs in a dumpster for cardboard to help get the truck unstuck on March 24 in the port town of Valdez, Alaska.  Losing traction in an icy parking lot was one of the more minor mechanical issues on their journey.

In addition to mechanical issues, we have continually fought our way through subzero nights, infrequent showers, nasty storms and dangerous avalanche conditions. That last concern really hit home after a good friend found himself in the emergency room as a result of a violent avalanche in the Ruby Mountains of Nevada.

Joey Howell drives north to Alaska via the Stewart Cassiar Highway in the Yukon Territory on March 22 in the old Ford F-350 to which they attached a winterized truck camper as shelter for the journey.

Four months into our journey, it feels like cruel irony that we should become so accustomed to life on the road, now that the end is in sight. What do you mean not everybody sleeps in two sleeping bags every night or gets their water from a gas station faucet?

Ghislain De Laplante, Rosie Staes, Christina Delaney and Joey Howell, from left, make their way up a mountain during a tour near Keith's Hut in the Coastal Mountains of British Columbia on March 6. Overnight hut trips gave Joey Howell and James Roh an opportunity to meet and hang out with locals.

Nevertheless, “real life” is calling, and in early May we will leave this otherworldly land of craggy peaks, vast snowfields and unspoiled wilderness to head back to the lower 48. And like every other time we hit the road, we lament the fact that we didn’t experience nearly as much as we would have liked to.

Joey Howell clears snow off the top of the camper during a storm at Whitewater Resort near Nelson, British Columbia on Feb. 13. Howell and James Roh spent over a week parked in the lot, snowboarding the mountains in the canyon, and meeting visitors to the area.

There’s so much to explore in the mountains that you couldn’t possibly do it all in a single lifetime, even if you were hell-bent on it. Alaska is certainly no different and in many ways, it hurts more to leave here than anywhere else. We haven’t even seen a fraction of a percent of what this state has to offer, but quite frankly, that’s a good thing. What’s left will gnaw at me until I find myself dropping everything to scratch that itch again.