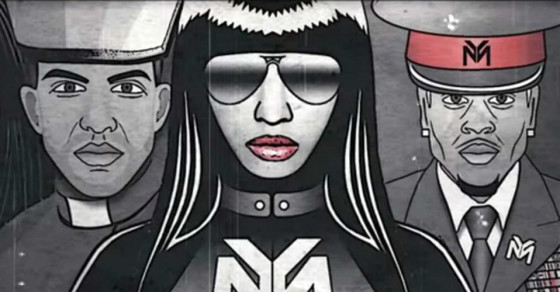 Did This Fan-Made Nazi Mashup Inspire Nicki Minaj’s “Only” Video?
By Molly Fitzpatrick

Did This Fan-Made Nazi Mashup Inspire Nicki Minaj’s “Only” Video?

Nicki Minaj set the Internet aflame this weekend with the release of a new animated music video for her single “Only,” which—vaguely? arguably? OK, unmistakably—exploits Nazi imagery. Minaj’s cartoon avatar is a dictator in command of a massive black-and-white army, wearing red armbands and parading under red banners emblazoned with a distinctly swastika-ish “YM” (short for Young Money, Minaj’s record label). As it turns out, people aren’t the hugest fans of Adolf Hitler and company. Who would have guessed?

More than anything else, the “Only” video apparently draws inspiration from Third Reich-anointed propaganda filmmaker Leni Riefenstahl and her nauseating Triumph of the Will, which rapturously documented the 1934 Nazi Party Convention in Nuremberg. In a bizarre Internet coincidence, YouTuber xpusnauyn produced an absurdist mashup of Minaj’s 2012 hit “Starships” and Riefenstahl’s work years before “Only” dropped: “Starship of the Will.”

You’ve got to give Minaj credit for her new video, if only because she has improbably managed to create something more offensive than a montage of beaming SS officers heil-ing to the beat.