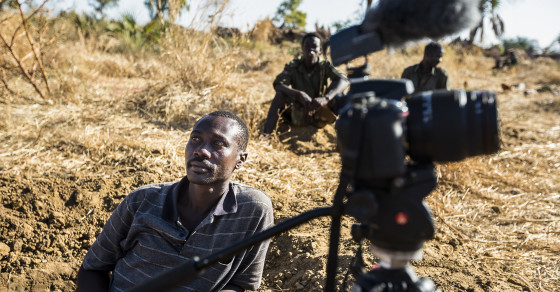 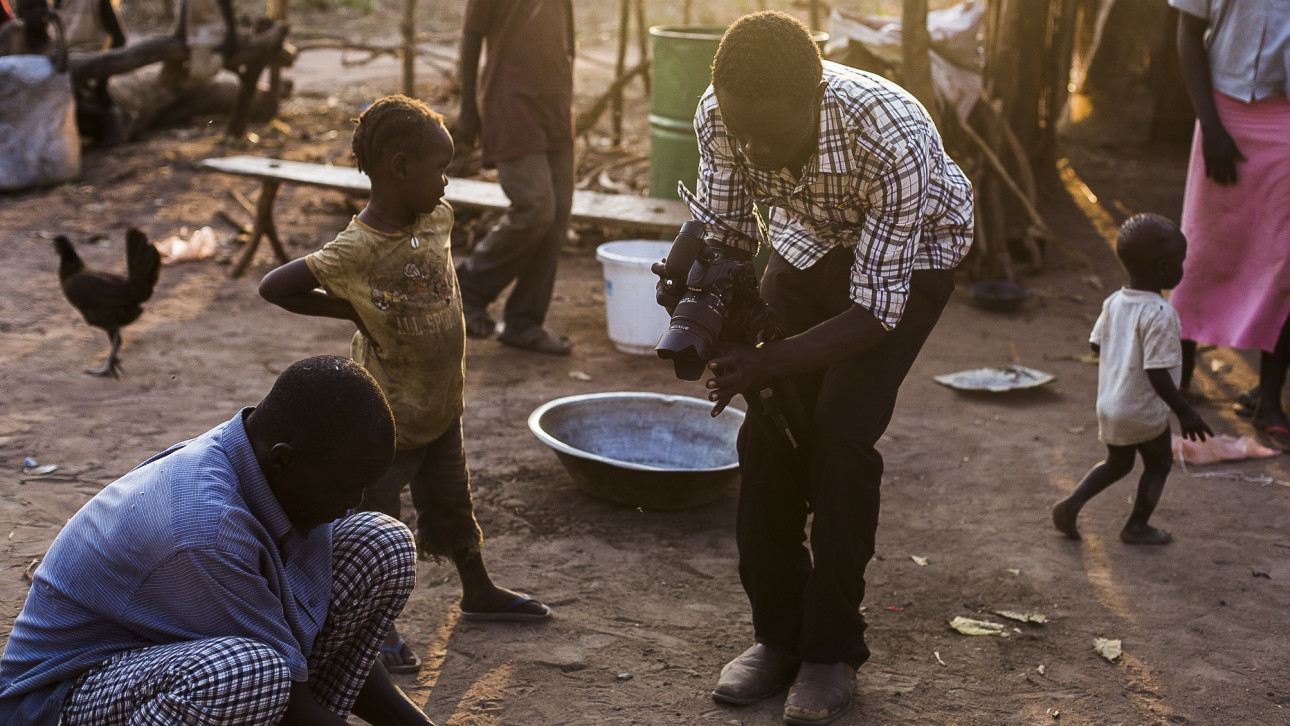 Hassan and his journalist cohorts are charged with reporting what the western press have largely been unable to. In May 2014, Sudan’s government bombed a hospital in the Nuba Mountains in South Kordofan, a small part of Sudan that hugs the border with South Sudan. The only footage of the episode was recorded by a Nuba Reports journalist.

“We’ve been reporting like five years, and there’s no difference,” Hassan told Vocativ in a Skype interview while he was in South Sudan. “They’re still bombing. People are being killed, people are being tortured.”

Sudanese journalists like Hassan began working for Nuba Reports, a local effort created by Ryan Boyette, a U.S. aid worker from Florida, who quit his job as a relief worker in the Nuba Mountains and launched a $45,000 KickStarter campaign to train Nuban journalists to report on the conflict themselves. With the help of private donations, Nuba Reports is now beginning to train a new set of journalists, most of them female, in Darfur and in Sudan’s capital, Khartoum.

Nuba Reports supplied journalists with cameras that have GPS-tagging capabilities. They gave them motorcycles to navigate the terrain. The staff provided safety equipment and war reporting training to nearly a dozen journalists who cover the front lines of the conflict in South Kordofan and in neighboring Blue Nile state. The reporters send their video, photos and field notes to the organization’s East African office where it’s edited and published for the world to see.

A season for bombs

In rural Africa, time is measured in seasons—planting season and harvest season, rainy season and dry. In South Kordofan, there is another: bombing season. It’s the period roughly between December and July when Khartoum sends troops, rockets and warplanes to attack civilians in their homes, markets and schools.

“The people of South Kordofan know that fighting season begins when the rainy season ends,” said Hassan. “The hot sun dries the muddy earth, easing the way for travel and troop movements.”

Hassan is a Nuban. He was born in Kauda, the capital of South Kordofan. Unlike the traditionally cattle-herding Arabs from which Sudan’s ruling National Congress Party (NCP) gets its constituency, the Nuba are farmers. Kauda’s family grows maize, millet and other crops. But unlike his father, Hassan walked away from the family trade and picked up a camera instead. He’d studied journalism at high school in Kenya, where he was sent to escape Sudan’s civil war. He returned in 2010, and a year later, he began documenting the relentless fighting.

Since 2011, Sudan’s military has been attacking civilians in the Nuba Mountains in retaliation for assaults by the Sudan People’s Liberation Army-North (SPLM-N)—a splinter of the rebel group that fought for South Sudan’s independence. Long disenfranchised by Sudan’s government in Khartoum and unable to share in the independence of their neighbor South Sudan, the Nuba have become casualties in a little-known war.

This week, Sudan’s President Omar al-Bashir, wanted by the Hague for crimes against humanity, eluded extradition after attending an African Union summit in South Africa. Despite appeals from the International Criminal Court, al-Bashir remains able to travel to other countries seemingly without fear of arrest.

In 2011 the man who was eventually elected governor of South Kordofan was an ally of the NCP and President al-Bashir. Al-Bashir saw that election as an opportunity:  He negated his responsibility under a peace agreement to integrate members of the SPLM-N into his own army, instead ordering them to disarm or to flee.

The rebels did neither. They began attacking oil production facilities and the outposts of the Sudanese military, whose soldiers responded by raiding Nuban villages and injuring and killing civilians there.

Tens of thousands of people have been displaced by the ensuing violence. As recently as this January, 3,000 additional Nuba fled to South Sudan to escape fighting, according to the United Nations.

When reporting a May 2014 attack, Hassan wrote: “Two Antonov warplanes circled that morning, dropping six bombs on the headquarters of the Nuba Relief, Rehabilitation and Development Organisation,” destroying offices and equipment. Hassan says this sort of attack is typical.

“The first thing when the government wants to attack a town they send a jet fighter, an Antonov, to fly over the town,” Hassan said. “And then you hear a rocket launch.”

The bombardment usually lasts three to six hours. “It isn’t soldiers who are suffering. It is only civilians,” he said. “Often time it’s kids who are being bombed.”

On one occasion it happened while Hassan was on his way from Kauda to the town of Heiban. “When I was almost there, like one kilometer away, we heard the Antonov circling,” he said. It was market day—the time of the week when thousands of people gather in one place. The headline on Hassan’s story for that day eventually read: “Five children killed as fighting seasons starts in the Nuba Mountains.”

“Those kids, two of them, they were taking showers, in the bathroom. When they heard the Antonov (they heard) people shouting to come out and hide,” he recalls. But it was too late. “The Antonov had already dropped the bomb.” Four of them were killed instantly, and a fifth died on her way to the hospital.

Hassan routinely follows up the aftermaths of these attacks, returning to record which of the injured survive and which did not. He says the wounds from these attacks remain long after the warplanes leave.

“If you go to Nuba now you will see many people who have lost parts of their body—no legs, no hands,” he said.

Some of Hassan and his colleagues’ most chilling images are not ones depicting the carnage, but rather the moments just before it occurs. A still from one video shows a Sudanese government Sukhoi jet fighter dropping a parachute bomb. The aircraft swoops in low and close, close enough, perhaps, for the pilot to make out the figures of civilians on the ground as they flee.

Sometimes the attacks are personal. Earlier in June, a bomb destroyed the home of Hassan’s uncle, injuring him to the point that his legs nearly required amputation. In 2012, Sudanese aircraft dropped six bombs on the then-house of Nuba Reports founder Ryan Boyette just two weeks after a government TV station aired a propaganda segment about him. Hassan is worried the same might happen to him.

“For me, as a journalist, it’s very dangerous because the government doesn’t want anything … [it] is doing to the people of Nuba to be reported,” Hassan said. “Because what it’s doing, is criminal things.”

People around the world are watching the conflict in Syria, Hassan says, but if 20 people are killed in one day in Nuba, no one notices.

“The world doesn’t know about the Nuba. We wanted to show about their plight,” Hassan said. “The war has continued for a long time. For me, the only solution is for the international community to be involved—for the world leaders to put pressure on Sudan.”

Sudan’s government has dropped 3,740 bombs on civilian targets here since 2012, according to Nuba Reports.

Just as Sudan’s government denied it was bombing civilians in Darfur from 2003 to 2005, the same regime insists it is not attacking civilians in the Nuba. Officials say they are only targeting armed rebels and those who harbor them.

“The civilians depend on agriculture. They don’t have money to give to the SPLA-N,” Hassan said.

The U.S. has provided some humanitarian assistance in South Kordofan, and American officials have met with political and military leaders from the region to try to resolve the crisis. But most humanitarian agencies, including the UN, have been unable to provide relief on the ground because of the intense fighting between Sudanese forces and rebels.

Western media outlets rarely cover the South Kordofan conflict, partly because of the graphic nature of the news, according to Ryan Boyette.

“Mainstream news organizations are in the impossible position of needing to show you important images but knowing you will turn away if it is too challenging,” the Nuba Reports founder wrote in a recent essay entitled, “When a Child Is Struck by a Missile, Do You Watch?”

“Each bomb has an impact. People are hurt and killed. Families are destroyed. Children like this are disfigured constantly,” Boyette writes. “We have no right to ignore this violence simply because we can’t stand it.”