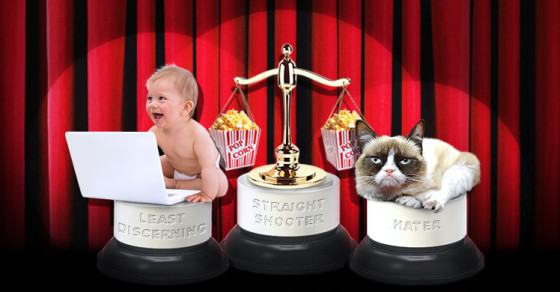 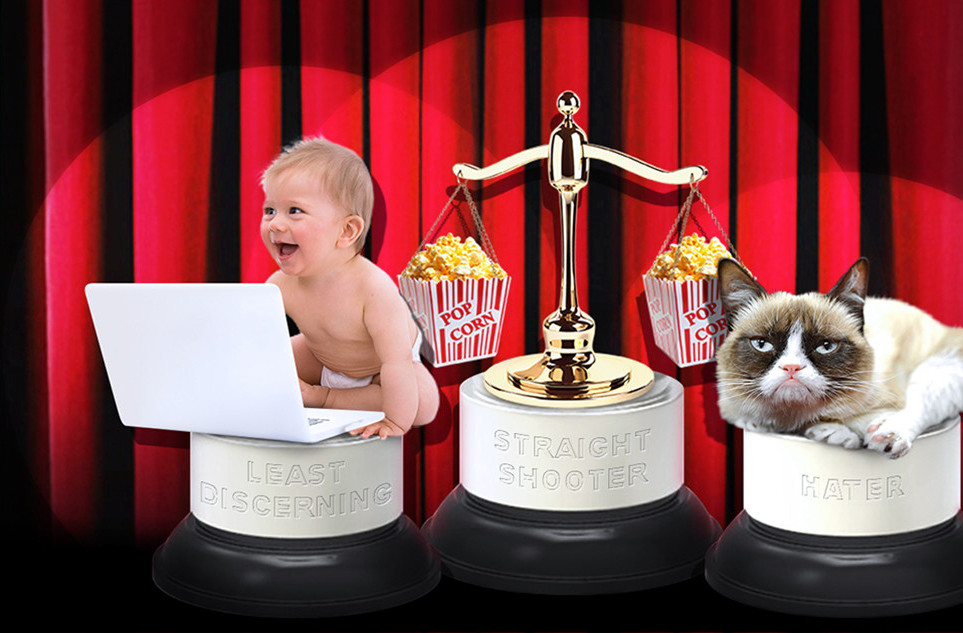 Eighteen months before he died, Roger Ebert told the The Onion’s AV Club that his appreciation for the “miracle” of filmmaking likely left him overrating movies. “I do suspect my star ratings average too high,” he said.

We did the math, and it turns out Ebert was right. Our exhaustive analysis of prominent film critics shows that the dearly departed cinephile tended to stick his thumbs up about 18% higher than his peers.

Because professional critics get paid to judge everyone else’s work, we thought it was high time someone flipped the script on them. Going purely by the numbers, who are the most shameless cheerleaders—and plain old hacks—who consistently give movies better reviews than the rest of the pack?  Who are the nastiest grouches who rarely seem to like anything (Spoiler: They’re exactly who you think they are), and who are the straight shooters who reliably deliver reviews in the critical dead center?

Using data from Metacritic, which converts every major reviewer’s scores to a universal scale of 0-100, we crunched the science to get a definitive look at how the country’s top 50 critics stack up against one another.

To ensure a statistically significant sample (and our sanity), we started with a list of the 200 highest-grossing movies of the last decade and concentrated on only those critics who had reviewed at least 40 of them, though for many, the sample was closer to 100 films. To narrow it down to the most influential critics, we considered factors like reach and reputation, the frequency of their reviews, and whether or not they’re still in the game, with a focus on those who write for newspapers, magazines and websites people actually read. We (reluctantly) left out certain notorious self-promoters like Fox 4 Kansas City’s Shawn Edwards, four-time winner of eFilmCritic’s annual quote whore award, who isn’t even in Metacritic’s database—likely because he’s more PR shill than critic.

We compared the top 50 critics’ average scores on the movies in our sample with the overall Metascore on the same individual set of films. For fun, we also took a look at how the critics’ average scores measured up to the “average user scores” on Rotten Tomatoes, which as everyone knows, are about as reliable as the scores you give pizza after a bong hit.

Because we didn’t include him on our list, we’ll use Roger Ebert as an example, which you can see in the annotation at right.

You’ll no doubt recognize some of the names at the top of our roster from movie advertisements, mostly because they’re routinely quoted praising movies that don’t really deserve it, with lines that seem to have been tailor-written for movie advertisements. These are the people who were behind 100-point scores for movies like Fever Pitch, Horrible Bosses and Lords of Dogtown.

Shockingly, Rolling Stone’s Peter Travers ranked rather respectably near the middle of the lot, despite his reputation for blurbability and hyperbolic exertions that frequently result in laughing ’til it hurts. Keep scrolling below the graphic for more. 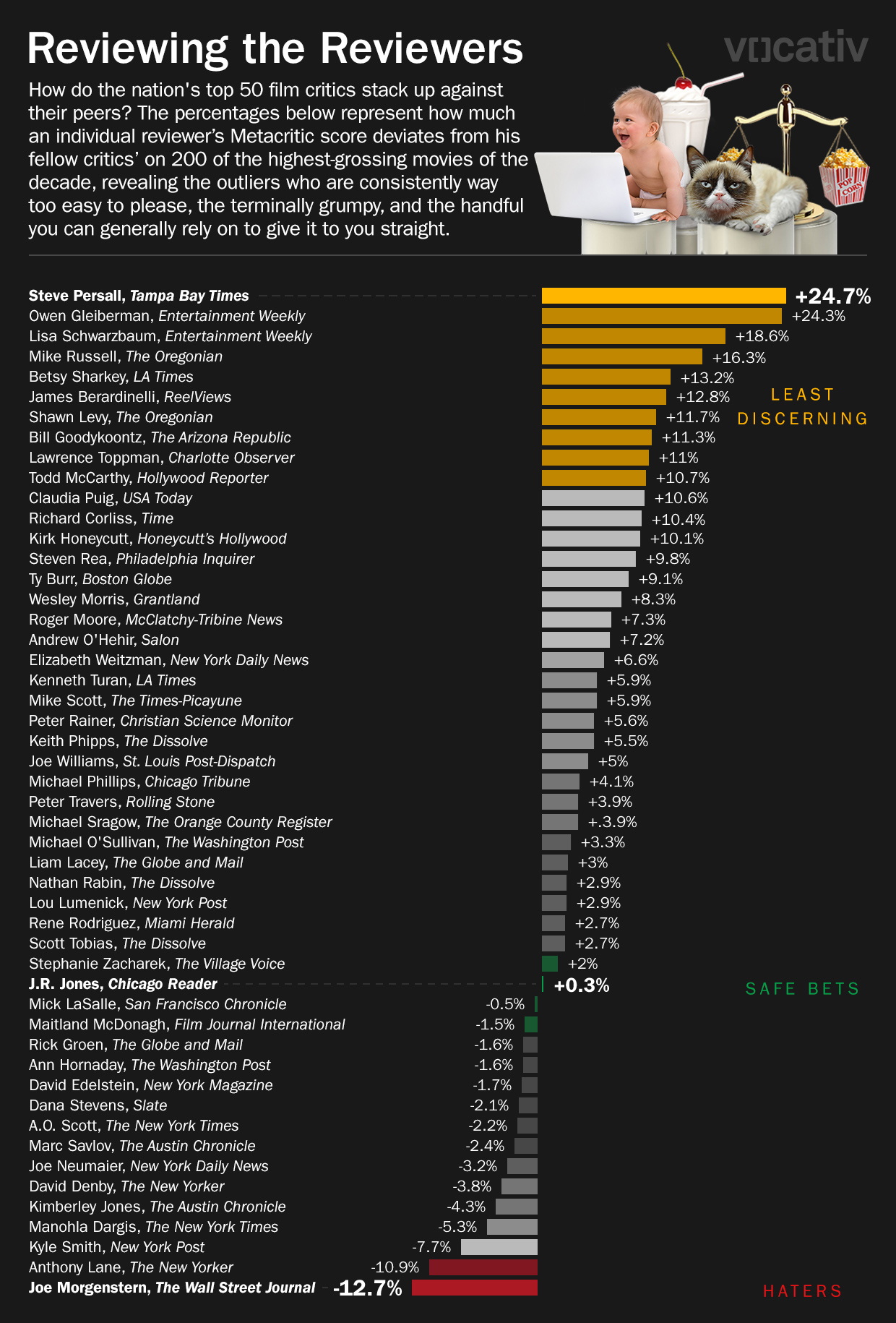 Because Hollywood loves awards, we’ve presented our winners with their very own trophies, unveiled with requisite ceremony below. The envelope, please! 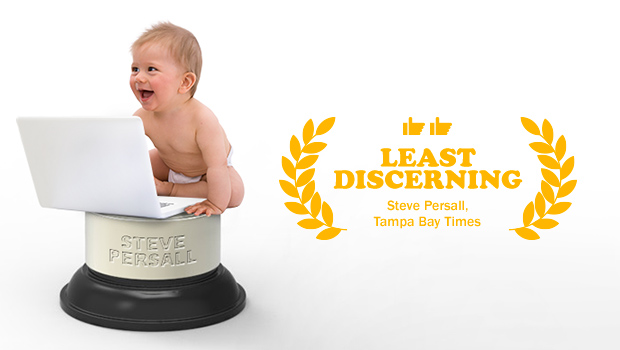 Steve Persall, The Tampa Bay Times
With an average Metacritic score of nearly 74, Persall rates movies 24.7% higher than every other critic and 7.8% higher than the average moviegoer, earning him the dubious distinction of Least Discerning Critic in America. Persall’s wide-eyed hackery is best illustrated through his unchecked raves for near-universally panned bombs like Gulliver’ Travels, The Tourist and The A-Team, the latter of which he described as “literally a blast” (get it?).  To Persall, Horrible Bosses was “an immediate classic” and Piranha 3D was “graphic, gratuitous and glorious.”

But the lack of discernment might not be his fault. To his credit, as Persall himself wrote in a review of Kevin James’ Zookeeper, he might simply love everything because he lives in Tampa, and “it’s just too hot outside for anything in air-conditioning to disappoint.”

Owen Gleiberman, Entertainment Weekly
Close call, Owen. EW’s erstwhile chief critic, laid off in early April after 24 years with the magazine, was barely bested (or is it worsted?) by Persall for the top spot on the list. We hate to kick a man when he’s down, but Gleiberman’s average score on the movies sampled was 73.09, or 24.3% higher than those of his fellow critics. Given his position at one of media’s blandest publications, Gleiberman’s fairly unadventurous tastes shouldn’t necessarily surprise. What does, however slightly, is that his scores are a full 9% higher than the average user reviews on the same movies, meaning he’s significantly less critical than pretty much every schmuck with a Rotten Tomatoes account. One particularly egregious highlight is his review of the Isla Fisher rom-com Confessions of a Shopaholic, which he awarded an A-minus despite acknowledging its lack of plot. “It’s just a moonstruck whirl of parties and buying sprees,” he gushed, “with a few very funny Shopaholics Anonymous meetings thrown in.” He gave it a higher grade than Goodfellas.

Lisa Schwarzbaum, Entertainment Weekly
Last February, when Schwarzbaum’s 22-year career at EW ended, Gleiberman lost the Siskel to his Ebert. Only at EW could Schwarzbaum qualify as a grump, with an average Metacritic score on sampled films of 68.83, which is nearly 19% higher than other critics on the same films. She even liked Crossroads, the 2002 teen flick shambles that was supposed to make Britney Spears a movie star. Schwarzbaum was “so impressed and even charmed…by the expertise with which Britney has been gently launched as a movie star,” that she gave it a B+, which translated rather forgivingly to an 83 on Metacritic. But that was still 56 points higher than the rest of her colleagues. Spears, of course, went on to gently launch a movie career that has consisted of no other movies.

Mike Russell, The Oregonian
One might expect a critic for Portland’s newspaper to maintain a detached elitism when reviewing Hollywood fare, presumably whilst wearing thick-framed glasses, but Russell is no hater. Our math shows that his average rating of 66.2, is 16% kinder than all other critics. He even liked The Fast and the Furious: Tokyo Drift, which “a friend” tells us is the worst entry in a horrid franchise.

Betsy Sharkey, Los Angeles Times
Unlike the four critics above her on this list, Sharkey deserves some credit for being slightly more critical than Joe Public, with an average score that’s 4.3% lower than the audience. That doesn’t mean she’s Jebediah Atkinson, however. Though she did describe Scream 4 as “brilliant,” Sharkey won her place on this list not so much by loving garbage movies, but by faintly praising them. For instance, in Garry Marshall’s Valentine’s Day, she saw actors who “mostly shine” and scenes that “mostly amuse,” while other critics saw a heart-shaped box of puke.

James Berardinelli, ReelViews
The godfather of online movie write-ups has been in the game for more than two decades, pounding out thousands of rosy reviews, with an average score on sampled films of 65.57, or 12.8% better than other critics. His three-star critique of the Diane Keaton, Mandy Moore comedy Because I Said So is literally the only positive take on the film, which has a Metascore of 26. That’s not a good look.

Shawn Levy, The Oregonian
Levy’s currently taking a break from the weekly review grind to write a book, so we don’t know his opinion on Tyler’s Perry’s latest abomination, The Single Moms Club. But we can guess. Of Levy’s 1,301 movie reviews on Metacritic, 82 of which fell into our sample and received grades 11.7% higher than other critics, only 66 are considered negative. 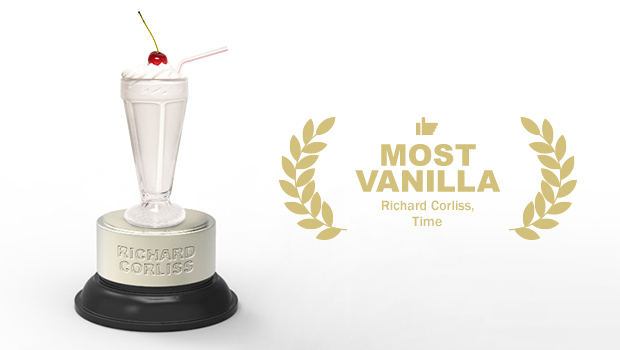 Richard Corliss, Time
Back in 2004, Stephen King wrote a piece for Entertainment Weekly bemoaning a trend toward “steady critical gradeflation—what could even be called four-star fever.” He called Corliss, along with several others, “formerly reliable critics who seem to have gone remarkably soft—not to say softhearted and sometimes softheaded.” Our research backs that up. Of all the critics we analyzed, Corliss’ scores fell closest to the public’s. So close, in fact, that they’re largely indistinguishable. Corliss’ average score on the 98 movies he reviewed in our sample is 71.53. The average audience score is 71.6. So think of reading Corliss as turning to any random stranger at the multiplex urinal and asking him what he thought. 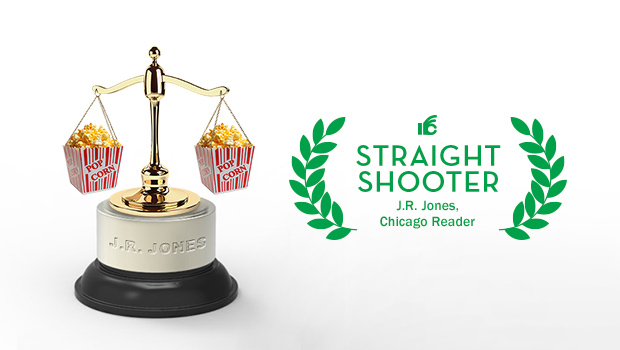 J.R. Jones, Chicago Reader
The scores Jones gave the films in our sample are nearly identical to their Metascores, at right around 59, which doesn’t actually mean he’s average in a middling kind of way. It means if you put all 50 of our critics in a room, he’s the one they’d agree with most—and probably the one you could trust most to size up a movie, if you had to pick just one. He’s the consensus critic who reliably finds the pragmatic center, who’s neither too soft nor too asshole. Think of him as the Justice Anthony Kennedy of film critics, right in the middle of the aisle. 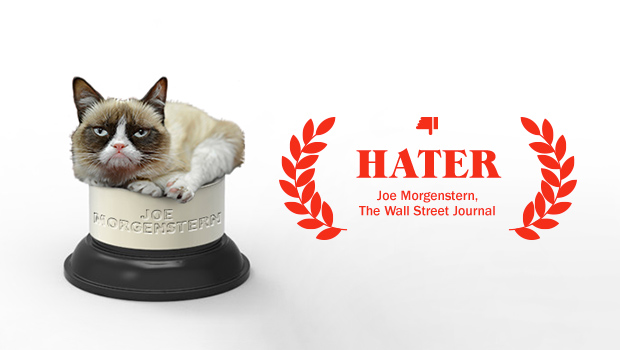 Joe Morgenstern, The Wall Street Journal
The grumpiest critic in the land, Morgenstern is an 81-year-old Pulitzer Prize winner who disagrees with his fellow critics—and average moviegoers—more than anyone else. His average score on 143 movies was 52.31, nearly 13% lower than his colleagues on the same movies. And the contrast between America’s biggest hater and America’s actual audiences is even starker. Morgenstern grades 22.9% lower than the public. Among those generally well-reviewed films that have felt his wrath were the Coen brothers’ best picture nominee A Serious Man and Quentin Tarantino’s Kill Bill, which Morgenstern wrote, “inflicts intolerable cruelty on its characters, and on its audience.”

Anthony Lane, The New Yorker
Since he’s British and writes for one of the country’s most intellectual magazines, it’s no surprise that Lane bottoms out on our list. His average score on sampled films is 56.81, a solid 10.9% below his colleagues and 19% below audiences. Still, this Negative Nancy retains the ability to surprise. Consider his uncommonly perky review of High School Musical 3: Senior Year, which he gave a score of 70. Same number he gave Pedro Almodóvar’s Volver and No Country for Old Men.

Infographics and Illustrations by Ben Buysse