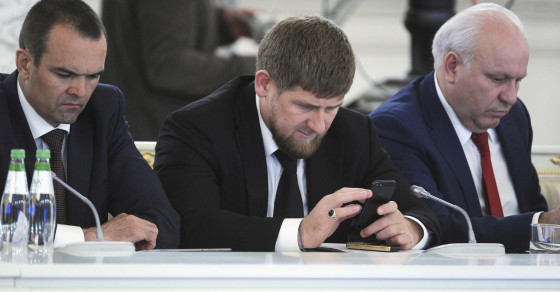 Ramzan Kadyrov, president of the Chechen Republic, is OBSESSED with Instagram. More so than pretty much any other world leader, Kadyrov loves sharing his political activity and personal life on the social network, garnering him 651,000 followers. A typical day on Kadyrov’s feed could feature him boxing or working out at the gym, heading to the mosque with friends or driving at high speed across the country.

A couple of days ago, however, Karydov was handed a Yotaphone 2. The Yotaphone is a new Russian phone built to target the Chinese market, and it appears that major political figures are part of the marketing assault. At the recent APEC summit, Russian President Vladimir Putin handed a Yotaphone2 to Chinese leader Xi Jinping. As well as its regular screen, the phone has a second screen on the back, powered by e-ink similar to that found in Amazon’s Kindle devices, which reduces power consumption.

The gift prompted an unusual rant from Kadyrov, in which he urged Chechens and Russians show their patriotism by purchasing the Yotaphone2 rather than the iPhone—and by avoiding American social media platforms. The message reads as follows:

“Good day my friends! I have great news! today I became the owner of a Yotaphone2! Earlier I said that I want to buy one, but Tina Kandelaki [Georgian-born celeb and a fellow Instagram power-user with nearly 700,000 followers] gave me a luxurious gift. This smartphone is exclusively made by Russia. Nothing compares to it, no other phone. Other than the HD screen, Yotaphone has another screen. YotaPhone has a second screen. This screen never turns off. using this screen it’s possible to read news and messages, and even to read books and write texts. It’s stylish and high-quality. I’m starting to enjoy YotaPhone! I am proud of our developers! And I suggest you to avoid buying iPhone, and support domestic manufactures, especially when they produce the best products. America calls Russia ‘enemy’, but our citizens are buying tens of millions of iPhone, thus financing the US military-industrial complex. I am sure that we are able to solve the problem of import substitution / find alternatives to import, so sanctions won’t force us to dance to their tune. Moreover, all Russians “reside [the original term he has used is “sit”] in American social network sites, helping their value increase. Our VK.ru isn’t worse. Let’s gradually move there! Patriotism, love of the motherland should be manifested in reality! Words alone are not enough!”

Patriotic fervor aside, the fact that Kadyrov posted a message urging his compatriots to ditch Western social media using Instagram—an American platform owned by Facebook, on which VKontakte is largely based—was not lost on his followers. The sarcastic backlash followed hot on the heels of his original post:

| |
Translation: “Using Instagram for iPhone Kadyrov called Russians to avoid the use of American social networks and gadgets. Great!”

You get the picture. The question is: Will Kadyrov follow through on his suggestion, delete his Instagram account and move wholesale to VKontakte, disappointing hundreds of thousands of fans, but perhaps becoming an even greater hero to his nation? Or is this just the agreed payback for getting a free phone from a beautiful Georgian celebrity?