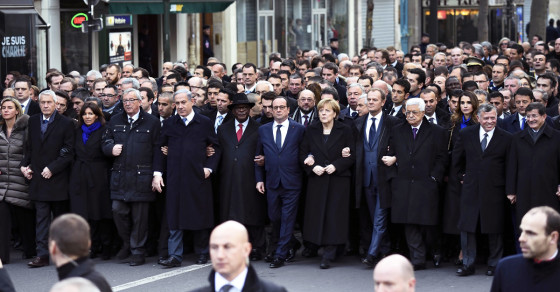 In a game akin to Where’s Waldo, a closer examination of this Hamevasser story has us asking: What happened to Angela Merkel?

Dozens of world leaders gathered in Paris Sunday in solidarity with the millions of marchers who came to commemorate the victims of last week’s Charlie Hebdo terror attack (top photo). Notably, both the Israeli prime minister, Benjamin Netanyahu, and Palestinian leader, Mahmoud Abbas, were in attendance. But in the version of the photo that ran in an issue of Hamevasser, an Orthodox Jewish newspaper (bottom), Merkel is missing, as is Paris Mayor Anne Hidalgo.

“The Israeli newspaper Hamevasser clears Merkel & Hidalgo in this photo: Women’s representation would be indecent.”

“With #Hamevasser, we realize that obscurantism knows no borders. Asshole, not a nationality.”

“What about before the unfathomable stupidity: the Israeli newspaper Hamevasser erases women from picture of the demo yesterday!”

However, this is par for the course for Hamevasser, which regularly censors content and advertisements to keep in line with Orthodox Jewish tradition, where women do not hold leadership roles. The paper “considers the representation of women as indecent,” so as a rule does not show them in pictures or give them bylines in the paper.