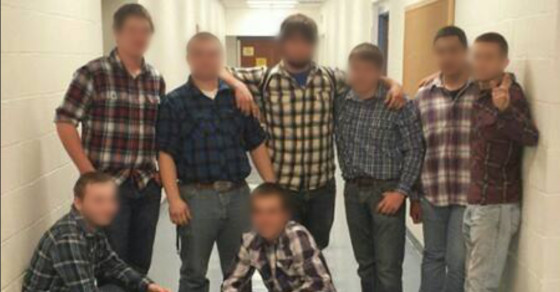 Every year, students around the country take part in a Day of Silence to raise attention around anti-LGBTQ bullying in schools. However, some kids at McGuffey High School in Pennsylvania took issue with the awareness effort and decided to host their own event the day before, calling it “Anti-Gay Day.”

Students were encouraged to wear flannel and write “anti-gay” on their hands to show their disdain for LGBTQ classmates. Some also hung posters on the lockers of out- or suspected-LGBTQ kids, and hassled them in the halls.

More Only 13 States Are Committed To Protecting Trans School Kids

But it didn’t stop there. The organizers decided to continue their harassment by wearing red or orange the next day, and have reportedly circulated a “lynch list” with the names of students to target; a string of events are also planned for this week. In the meantime, the school is trying to get to the bottom of it.

“Yesterday afternoon, April 16, 2015, allegations of harassment were brought to the attention of our administration,” reads a statement by superintendent, Dr. Erica Kolat. “McGuffey School District, along with school police officers, continue to investigate all allegations. We will follow our Student Code of Conduct, and file legal citations, as warranted. We resolve to ensure that all children can grow and learn in a safe, supportive environment free from discrimination.”

However, some students say not enough is being done to prevent the sustained discrimination, and many feel fearful about returning to school. “It’s sad to me. It’s a high school. We should feel safe here. We don’t, and it’s starting to get worse,” said one such student.