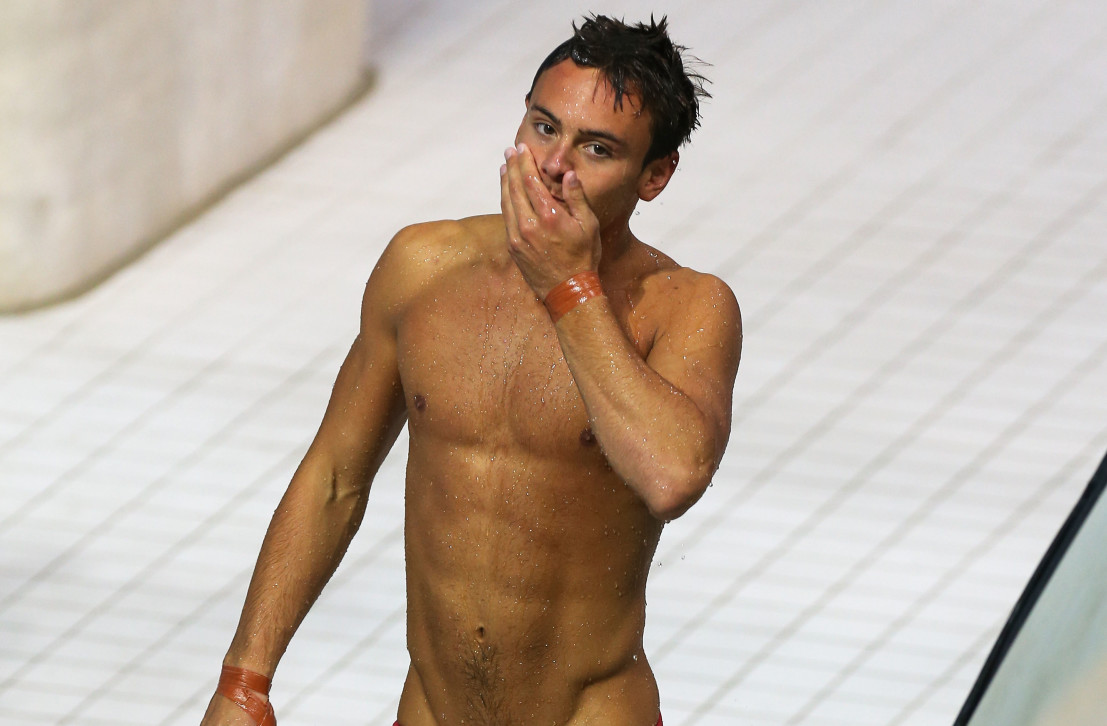 Today 19-year-old British Olympic diver Tom Daley posted a personal YouTube video where he talks about his happy life with his new partner: a man. It was surprising to few.

The video, posted 10 hours ago, already has nearly 1.5 million views.

Daley became a superstar at the 2012 London Olympics, where he won the bronze medal in the 10-meter men’s platform event.

He also became an international heartthrob after he was featured on TV with his swimsuit area covered by a smartly placed graphic, his head tilted back erotically, his hand wandering curiously down toward his nether regions:

His boyish good looks also made him a gay pin-up star, something he welcomed even before he came out as bisexual. On Sept. 9, BuzzFeed posted “34 Reasons It’s A True Tragedy Tom Daley Isn’t Gay.” Readers of gay U.K. magazine Attitude voted him the sexiest man in the world.

In his coming-out video, Daley says of his relationship: “It did take me by surprise a little bit…. Of course, I still fancy girls. But right now, I’m dating a guy, and I couldn’t be happier.” The Guardian wonders if all the “Tom Daley Comes Out as Gay” headlines mean that “being bisexual is still taboo.”

Regardless of bisexual vs. queer issues (definitely still a thing!), the response to Daley’s admission has been overwhelmingly positive. He’s a popular man: He has 2.5 million followers on Twitter, a considerable amount for someone whose sport only gets attention every four years. The world’s fastest man, track star Usain Bolt, by comparison, has 3.1 million followers. #RespectTom is trending internationally on Twitter today.

27-year-old Bolt's says "The most naturally gifted athlete the world has ever seen."

#humblebrag? He does have six gold medals, compared to Daley's one bronze.

Blake Skjellerup, a short-track speedskater who has become the face of Olympic LGBT athletes because of his plans to attend the 2014 Winter Olympics in decidedly anti-gay Sochi, Russia, had this to say regarding Daley’s announcement.

Skjellerup’s message is the same as many other athletes, celebrities and fans who are tweeting an outpouring of support to Daley.

Hot Olympic diver who everyone thought might be gay anyway says he's dating a dude? Alright. Drag queen in the annual Macy's Thanksgiving Day Parade? No thanks.

Despite a few homophobic tweets, the announcement hasn’t caused much controversy—a happy indicator, maybe, of how society is evolving. Daley’s news also invites comparisons to Olympic diver Greg Louganis, an out American who has written high-profile op-eds about boycotts and the Sochi Games (he supports LGBT athletes, but doesn’t support a boycott, which he thinks would do more harm than good).

Look I am not one to spread rumors, but Tom Daley will always be this young man from GB who can rip like no... https://t.co/QwHwJuMWhW

@TomDaley1994 Every gay teen can hold their head high today. Like @greglouganis you are both an icon and a hero. #RespectTom

I opened the second door on my advent calendar and Tom Daley came out. Seriously @TomDaley1994 congratulations. So happy for you.

Overwhelmed by all the support! Means the world! Thanks so much guys ❤️❤️❤️

He also earned a tweet from pop queen Kylie Minogue, which is kind of every gay-leaning boy’s dream.