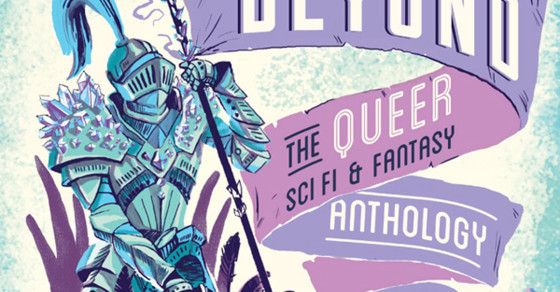 A Kickstarter campaign to fund an all-ages LGBT comic book attracted donations of almost $50,000 from over a thousand people. It took less than a day for “Beyond“, an anthology of 18 stories by 26 queer-identified contributors, to raise enough funds for a first print run.

On March 16, comics writer Sfé Monster and her assistant Taneka Stotts launched the Kickstarter campaign to fund the anthology of queer fantasy/sci-fi adventures. By March 17, they had hit $25,000, and the pledges kept rolling in. The 250-page collection will include stories across the spectrum of comic book genres, with queer heroes ranging from space pirates to dragon slayers. The two hope to release the anthology in September 2015.

“Beyond” is actually part of a larger a wave of queer sci-fi/fantasy media campaigns. Recent examples include the GlitterShip Podcast Zine and Lightspeed Magazine’s special issue, “Queers Destroy Science Fiction.” Though crowdfunding is a very 2015 wrinkle on the the category, collaborative LGBT science fiction writing is as old as the genre itself.

Long before the internet, LGBT writers and comic artists were forming their own communities around fantasy adventures and science fiction series. Some media critics believe that slash fan fiction—same-sex romance tales between famous characters such as Kirk and Spock from “Star Trek”—was one of the main forces that helped fan fiction grow from a niche hobby to a worldwide phenomena with multiple media powerhouses. Today, queer science fiction is now more profitable than ever before.

Here's a peek at the (work-in-progress) cover art I'm making for for The Beyond Anthology, which just surpassed its… pic.twitter.com/rMZU4yd1nV

The Beyond Kickstarter is UP! @Redribbonrobot and I made a comic for it about lady astronauts! https://t.co/pB508HkipD pic.twitter.com/mn5CihO8JJ