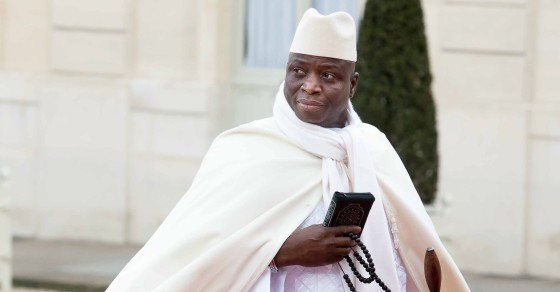 As AFP reports, a coup by Gambia’s presidential guards against the leader of the small West African nation, President Yahya Jammeh, failed on Tuesday. Jammeh offered an account of his own attempted overthrow in a statement on his Facebook page. There, he claims a group of men from Senegal invaded “in an attempt to overthrow [his] legitimate government.” He writes that four “insurgents” were killed and four captured. He goes on to accuse former Commanding Officer of the State Guards Lamin Sanneh of orchestrating the attack.

Some reports suggest Jammeh was in France when the shooting erupted overnight. Others say he was in Dubai. Local media reported prevailing calm on Tuesday after the attackers were defeated.

We assure world that Life is going on as normal, Civil Order is in place & Citizens are going on about day to day lives. #Gambia is in order

While it’s fortunate only a handful were harmed or killed in the incident, the outcome is perhaps regrettable. Not only is Jammeh widely considered one of the most repressive leaders in the world, but also possibly the most homophobic (or heterosexist).

The president has frequently offered toxic ideas about homosexuality and witchcraft on the local and world stages. For instance, Jammeh was quoted in February as saying, “We will fight these vermin called homosexuals or gays the same way we are fighting malaria-causing mosquitoes, if not more aggressively.”

The U.S. responded last week to Jammeh’s long history of institutional homophobia by excluding Gambia from the African Growth and Opportunities Act, something activists praised as a first step toward addressing LGBT human-rights abuses in the country. Gambia was exporting around $37 million in goods to the U.S. each year duty-free before the suspension placed on its ability to receive benefits from the act.

For his part, Jammeh defends Gambia’s Islamic beliefs to the point where he insists he will not make friends with nations if the friendship is contingent upon supporting LGBT rights.