In a 5-4 ruling, the Supreme Court decided on Wednesday that critical parts of the Defense of Marriage Act are unconstitutional and discriminatory, handing gay rights activists a huge victory.

Justice Kennedy, writing the opinion for the court, said the federal law, which passed in 1996, is “unconstitutional as a deprivation of the equal liberty of persons that is protected by the Fifth Amendment.”

The court also dismissed the appeal of Proposition 8, the 2008 California law that banned same-sex marriages in the Golden State.

Immediate reactions across social media were overwhelmingly positive, with Supreme Court and #equalityforall making it into worldwide trends on Twitter. Right after the decision was made public, there were 9,000 tweets per second on DOMA — compare that to the 2012 SuperBowl peak of 12,000 tweets per second. Even @BarackObama tweeted #loveislove.

Retweet if you believe everyone should be able to marry the person they love. #LoveIsLove pic.twitter.com/jGSProRoUN

Some people responded by mocking or disparaging former President Bill Clinton for signing DOMA into law in the first place, while others, who were excited about today’s rulings, still felt angry about yesterday’s ruling that overturned key portions of the Voting Rights Act.

Hours after the decision, many in New York and California appeared to be in full celebration mode: crowds are already gathering at the Stonewall Inn in downtown Manhattan, the site of historic riots in 1969 that spurred the gay rights movement, and openly gay California Congressman Mark Takano said he thinks the state will start issuing marriage licenses again today. Of about 500 tweets mentioning Prop 8 in the San Francisco area, multiple posts were from people expressing excitement that they could soon get married, while others in California, who had married before Prop 8 passed, celebrated the news.

But what about middle America?

According to an analysis of approximately 800 tweets posted between 10 am (when the ruling came down) and 1:30 pm today around Lebanon, Kansas — the geographical center of the United States — at least some in the Midwest appear to be just as happy as their coastal counterparts. Only 1 percent of those tweets in a 500-mile radius around Lebanon expressed negative sentiment in response to today’s rulings. Legally, though, Twitter doesn’t matter: Kansas passed a constitutional ban against same-sex marriage in 2005.

Not everyone is ecstatic: the National Organization for Marriage (NOM), one of the most vocal nonprofits dedicated to fighting against same-sex marriage, posted the following on their 34,000-likes-strong Facebook page: 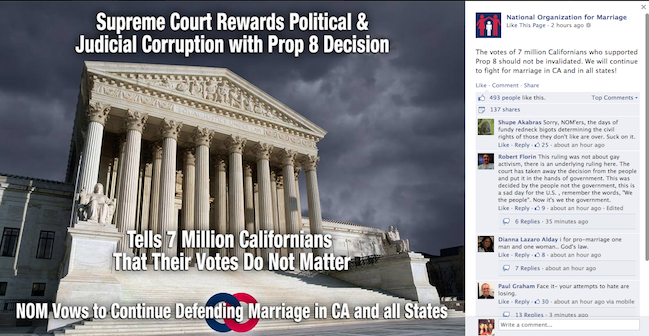 NOM was actually formed in 2007 for the express purpose of getting Proposition 8 passed in California — which it did roughly a year later  with seven million votes. More than six million people voted against it, and in 2010, a U.S. district court judge overturned the law. In a statement posted to the NOM blog, the group’s president, Brian Brown, said: “there’s a stench coming from these cases that has now stained the Supreme Court.”

When lawyers actually argued the Prop 8 case (Hollingsworth v. Perry) before the Supreme Court in March, Vocativ monitored social media to gauge public opinion. Anti-gay hashtags like #nogays, #notogays and #nohomos were used frequently at the time: but today, a search for those same hashtags only produced 8 tweets — they did not trend at all.

Captain Rushlow probably has the right idea. While much of America celebrated today’s victory for gay rights, the upper house of the Russian Parliament today passed an anti-gay propaganda law that the lower house validated a few weeks ago.