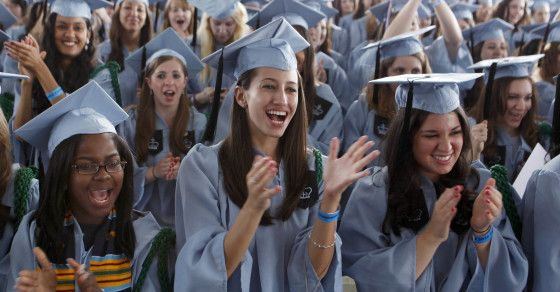 Columbia University’s Barnard College became the last of the highly regarded “Seven Sisters” colleges in the United States to accept admissions from transgender women last week. But not every step towards equality is created equal. The nation’s leading colleges for women have each come to their own definition of what it means to be transgender and, therefore, eligible for admission to such prestigious institutions.

A Vocativ analysis of women’s colleges that have introduced transgender policies reveals that the definition of what it means to be a woman, or at least what it takes to be admitted to a college designed for women, is still very much up for debate. Take Mount Holyoke College in Massachusetts: Unlike several other colleges, it takes applications from females who have transitioned to males and non-gender binary individuals born either gender. In fact, the only applications the women’s college won’t take are from people who were born male and continue to identify as men.

Barnard didn’t go that far when it introduced its headline-making policy on Thursday. The college said it would consider individuals who were born male, but now identify as female for some of the 2,500 places at the prestigious private women’s college, and that admitted students who transition to become men would be permitted to graduate.

The college said it would not require transgender women to prove via legal documentation that they identify as female, nor would they have had to undergone sex reassignment surgery. But the school has not agreed to consider for admission transgender individuals who identify as male, or such people who do not see themselves as gender binary, which means they do not feel they can be identified as either male or female. As a women’s college admission policy, Barnard’s seems fair, especially considering it was developed following an exhaustive consultation from students, faculty, alumnae and parents over a period of one year.

Way down at the other end of the spectrum is Hollins University in Virginia, which insists transgender female applicants have had both sex reassignment surgery and their name legally changed before applying. The college’s student handbook for the 2014/2015 academic year states: “Applicants to the undergraduate program, who have completed the physical sex reassignment surgery and legal transformation from male to female will be evaluated for acceptance to the undergraduate program on the same basis as other women candidates.”

Not only that, but the college states that if an undergraduate student is living on campus and begins gender reassignment surgery, “the admission reserves the right, based on the best interest of the student and the university community, to decide if the student will be permitted to continue living in university housing”. The handbook says this decision would be made by the dean of students, but “directly appealable to the president of the university or his or her designee.” 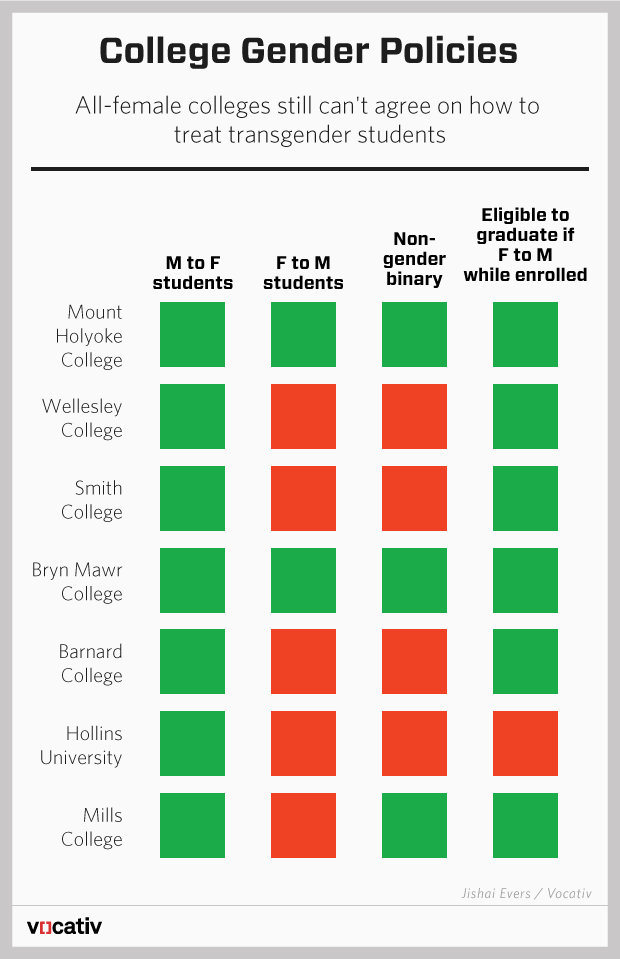 No other college Vocativ analyzed imposed Hollins’ requirement of sex reassignment surgery and legal documentation. But neither Mills College in California, which was the first women’s college in the US to introduce a transgender policy last August, nor Pennsylvania’s Bryn Mawr College, will permit transgender males. Both said they would only permit non-gender binary applicants who were born female. Wellesley and Smith colleges in Massachusetts, and Hollins are similar to Barnard in that they will not accept applications from people who have not picked a gender, regardless of the gender they were born.

If it weren’t already apparent that gender definitions are still in a state of flux, Vocativ contacted the latest policy-adoptee Barnard College and learned that no transgender women are currently enrolled, but that it does count transgender men, and non-gender binary individuals among its students, two groups which would have been ineligible for admission had they transitioned before college. That’s likely because, until the official policy, the college was dealing with transgender students on a case by case basis, and those students may have transitioned after they enrolled.

While women’s colleges have had to clarify their stance on transgender people, most major institutions accepting applications from all genders have introduced anti-discrimination policies targeted at LGBT applicants and other minority groups. Harvard, William’s College, Stanford, Swarthmore College, Princeton and other top US universities also have gender-neutral housing policies in place. Yale offers such housing for juniors and seniors, and has pledged to introduce it for sophomores by fall 2015. One notable exception is MIT: Several dorms at the leading institute have adopted such transgender-friendly policies, but it is yet to introduce a college-wide policy.