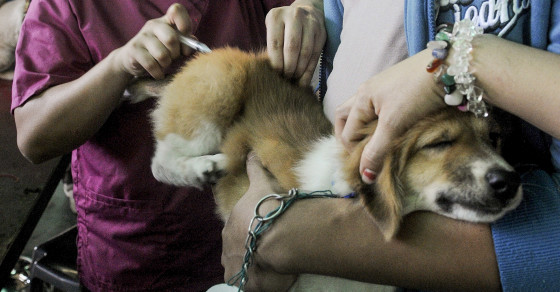 College students weren’t the only ones to come back from Spring Break worse for wear. In Chicago, more than 1,100 dogs—many in daycare or kennels while their humans took vacation for a week—were infected by the H3N2 dog influenza virus, and six have died. The virus has also been reported in pups in Indiana, Ohio and Wisconsin.

According to a recent CDC report, state veterinary laboratories in New York and Wisconsin have identified similarities between this H3N2 strain and the Asian H3N2 dog flu virus that was found in China and South Korea in 2006—both strains are likely an adaptation of a bird flu virus. H3N2 has since been reported in Thailand, and has also affected cats.

More Facebook Is Mobilizing An Army Against Dog-Killing Cops

Though symptoms—cough, runny nose and fever—are exactly the same, the CDC does note that the dog version of H3N2 is different than the H3N2 human flu virus that causes yearly illnesses during the winter months. And there have been no cases of dog flu viruses spreading to humans. There’s no vaccine for H3N2.

Dr. Donna Alexander, administrator of the Cook County Department of Animal and Rabies Control, recommends that dog owners should avoid places where their pets might interact with other dogs, until the threat passes. This includes dog parks, training classes and boarding/daycare facilities.

A Timeline of Dog Flu in the U.S.